Facebook reminded me today that it’s been a year since I posted this photo of the lovely Cassi Lopez adding two piercings to my right ear. 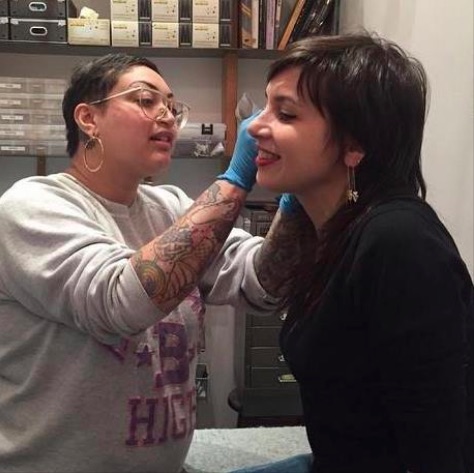 The photo, in turn, reminded me that I have an earring-palooza to blog about because we’ve been piercing like crazy here. That’s what happens when you’re a jewelry designer (and a midlife rebel) who is constantly producing new earring designs. You need new places to put those earrings, which is what I pointed out to fellow designer Julie Lamb before I convinced her to visit Cassi at New York Adorned last month. Julie designs lots of earrings for her line, including adorable black-sheep studs. Yet she was walking around with only two working piercings in each lobe. The shame! Cassi fixed her up by reopening an old third hole and adding a fourth to Julie’s right ear. Much better, right? 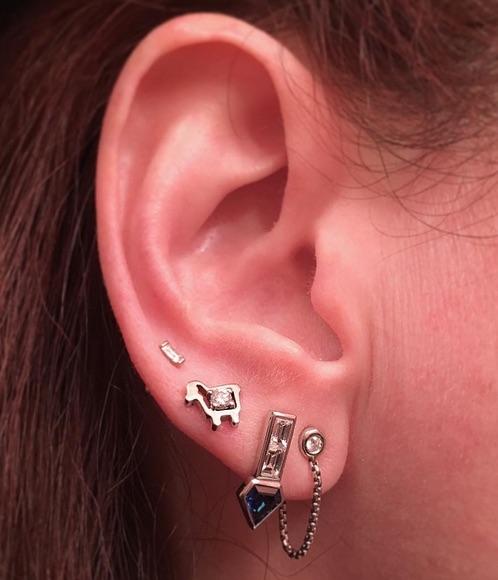 Julie was a wee bit hesitant ahead of the process, and she definitely had a moment of on-camera ouchiness … 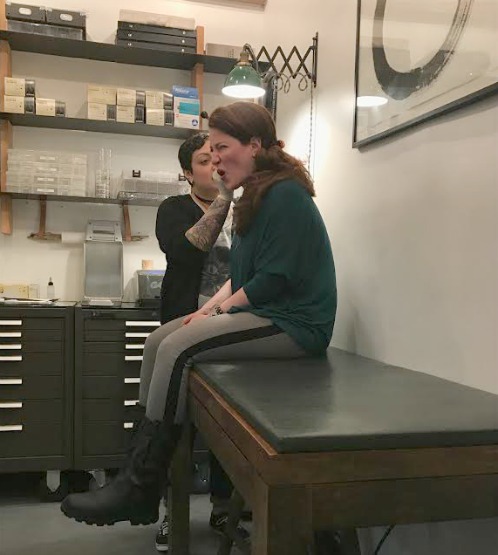 … but she was so thrilled by the results that she has vowed to go back soon for the other ear.

I, however, look my most serene when getting an ear piercing. Seriously, I think this piercing picture from 2015 is one of my best photos ever. 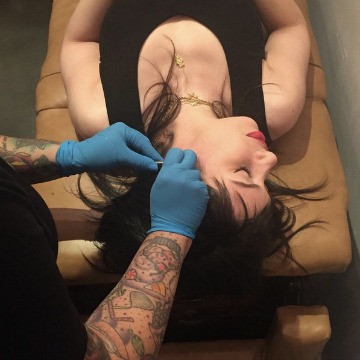 This time, Julie took (and narrated) a video of me chatting and laughing with Cassi mid-piercing.

I’m now at 10 ear piercings, up from three in 2014 — which, not coincidentally, was the year after I started to produce mass quantities of single stud earrings. In case you’re looking for some piercing inspiration, here are photos of all of my piercings in a fairly healed state; the names for all of the funny little ear parts; and information on the earrings. On the left ear, I’ve got three lobe piercings, a tragus, and a daith.

In the first lobe piercing, I’m wearing my platinum safety-pin earring design. (The 18K-gold version will be available soon.) In the second lobe piercing, I’m wearing my own blackened gold hoop with black diamonds. I never photographed that hoop for my website, but if you like it, holla at me at info at wendybrandes dot com and I’ll make you a single or a pair. In the third lobe piercing, I’ve got one of my platinum and diamond micro studs for tender ears. I have a different version of that micro stud in my tragus. The tragus earring has internal threading that allows the post to screw together, as well as a flat labret back, so it’s more secure and comfortable to wear in cartilage. You can email me for one of those too. The daith hoop is something I picked up at New York Adorned to wear until I can whip up my own daith design. 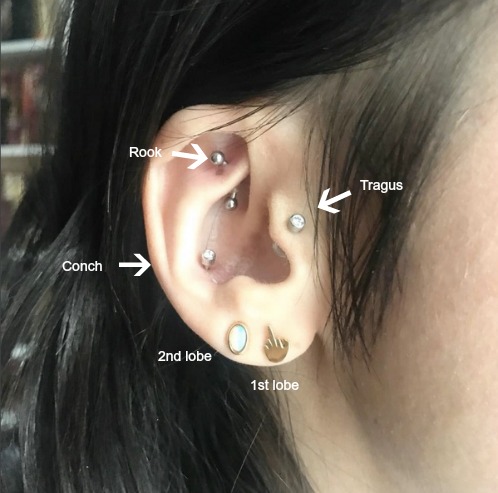 The rook is the one I got in February. The barbell-shaped earring there is a stainless-steel piercing piece that I got at New York Adorned. I’ll swap that out for my own rook design as soon as I can get around to that. The conch and tragus earrings are both my platinum micro studs for tender ears in the style designed specifically for cartilage piercings. In the first lobe piercing, I’m wearing my Eminem-inspired middle-finger emoji stud in 18K gold (also available in silver). The second lobe piercing gives you a preview of my new opal studs set in 18K yellow gold. Those will be available for sale soon.

As far as pain goes, you can probably tell from the pictures and video that I’m not too squeamish about ear piercings (so maybe I’m not the best person to ask), but I’d say a cartilage piercing hurts much less than a badly stubbed toe. Plus you’re braced for the piercing and you get new jewelry with it, so I’d take multiple, simultaneous piercings over a single stubbed toe any day! Healing-wise, the tragus piercings were pretty easy, especially after I was able to take the stainless steel piercing earrings out and replace them with my platinum micro studs, which I designed specifically for the healing process. I was very initially very enthused for more rook jewelry, as you could hear in the video with Cassi. I was less enthused when after a week it got SO! SWOLLEN! But that turned out to be normal and was only at its worst for about three days. I think it’s looking pretty good now, after only a month, though a lot of people say it takes over a year to truly settle down. The conch has been the hardest to heal. Both me and my right-hand woman Eryn have had a tough time with that one. Mine was aggravated by sleeping on it, getting hair caught on it, having it bumped when someone hugged me, and so on. The only piercing photo of me looking a little skeptical was one Julie took as I was asking Cassi, “Is this ever going to heal?”

Cassi said it would, and she must be magic, because the conch piercing has been much better ever since she spoke those words in its vicinity. I initially got mine pierced with a hoop, which looked fabulous, but it got caught on everything. I’d recommend piercing your conch with a stud and switching to a hoop when it heals.

Need more inspo? Eryn got a faux rook piercing yesterday, during the big snowstorm that didn’t amount to a blizzard. 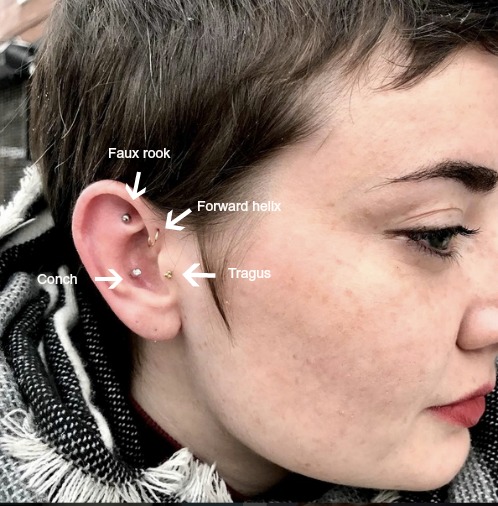 Eryn’s sister Grace was visiting from out of town and got three piercings at once: Those two flat disks in her cartilage and a very interesting conch piercing, called an orbital, which requires two holes instead of one. 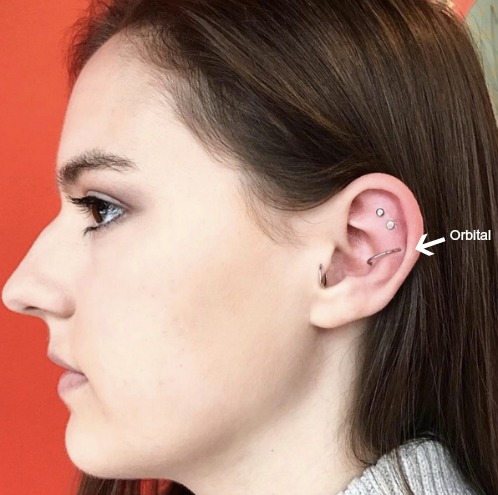 I’ll have to get her report on how that feels after a couple of days.

Cassi has a good eye for a well-balanced ear. She’ll make suggestions that you would never think of. You can see her work on Instagram. I wish I had asked her to design my left ear, instead of just telling her I wanted a third lobe piercing. Since that one, I’ve asked her to tell me what she thinks is best. I would never have ended up with a daith or a rook without her guidance. In addition to piercing at New York Adorned, she occasionally pierces while she travels, including in L.A. and London. Keep an eye on her IG for her travel schedule.

UPDATED TO ADD: The ideal ear piercings in my opinion, as well as Cassi’s, call for an aesthetically pleasing asymmetry. Because I have three lobe piercings, a tragus, and a daith on the left ear, I avoided doing the same on the right. I think the matchy-matchy look can be distracting. With that in mind, I’d say Grace has exceptionally fabulous ears. As Eryn pointed out to me, Grace doesn’t have the traditional lobe piercing in the ear that she just had done, and she doesn’t have any piercings at all — not even a lobe piercing — in the other ear. “Cassi was in love with how asymmetrical her piercings were,” Eryn said. Me too!

You might also like
Miley Cyrus, Earrings and the Week in Review
Flashback: The Agony and Ecstasy of a Small Business
What Wendy Wore: Decade to Decade

« No, Thank YOU, Gorgeous Clients!
Throwback Thursday: What Wendy Wore in January »