Gorgeous actress Margaret Anne Florence of CMT’s Sun Records has been spotted out and about wearing Wendy Brandes jewelry, including my Hathor swivel earrings in turquoise and carnelian.

Decisions, decisions! It was so much fun choosing from this beautiful @wendybrandesjewelry! Swipe right ?? for a close-up on the jewelry!

She was clearly feeling frisky in the jewelry and a little black dress from Prose & Poetry.

Sun Records is set in the 1950s, during the early days of rock ‘n’ roll, when Sun founder and producer Sam Phillips worked with Elvis Presley, Johnny Cash, Jerry Lee Lewis and Carl Perkins. Margaret plays Marion Keisker, a Memphis radio personality and Sam’s assistant. (Phillips is played by Chad Michael Murray.) You can check out Margaret’s interviews about the role with CMT and Town & Country. She looks wonderful in ’50s hair and makeup, doesn’t she? 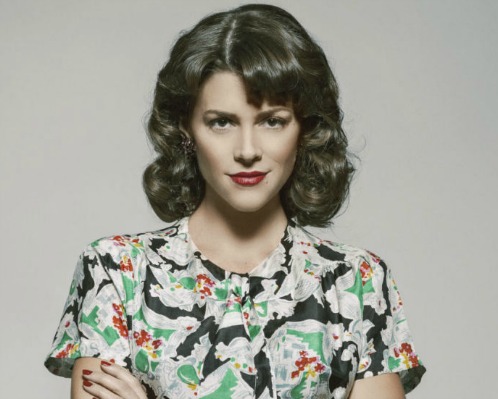 I’m intrigued by the controversy around the real-life Keisker’s role in Elvis’s career. An interview she did with journalist Jerry Hopkins in 1970 is often cited by online sources as evidence that Keisker was the first person to record an 18-year-old Elvis and that Phillips either came in towards the end of the recording session or heard a tape later. Decades after the fact, Phillips said he started the recording, including in this 1986 interview with Rolling Stone, in which Elizabeth Kaye asked the then 63-year-old Phillips, “The story goes that it was recorded not by you but by your assistant, Marion Keisker. Is that your recollection?” He replied:

“Well, I would love to say Marion did it. She did an awful lot for me, man. I mean we painted floors together. I wouldn’t take anything away from Marion Keisker. And I think she made the statement inadvertently. I don’t want to make Marion look bad on the thing. I wish you’d just drop it, ’cause I don’t care who it was. But it was simply me. That’s all.”

According to the 1994 book Last Train to Memphis: The Rise of Elvis Presley, both Phillips and Keisker were present that day, but Phillips was in the control booth. Author Peter Guralnick wrote that when Elvis walked into Sun Records on July 18, 1953, to record himself (supposedly as a gift to his mother), the first person he met was Marion, with whom he had a memorable conversation. She asked, “Who do you sound like?” He replied, “I don’t sound like nobody.”

Presley then recorded “My Happiness” and “That’s When Your Heartaches Begin.” When he finished, according to Guralnick:

“The boy looked up expectantly at the man in the control booth. Mr. Phillips nodded and said politely that he was an ‘interesting’ singer. ‘We might give you a call sometime.’ He even had Miss Keisker make a note of the boy’s name, which she misspelled and then editorialized beside it: ‘Good ballad singer. Hold.'”

However, Guralnick’s book includes a long footnote about this anecdote. In the footnote, Guralnick said that the earliest telling of this story that he could find was in Bob Johnson’s 1956 Elvis Presley Speaks!, which was based on reporting done since early 1955. This gave Marion’s version, in which Sam came in “before the record session was completed,” meaning Keisker started the recording without him. Guralnick, who knew Keisker during the last 10 years of her life, said her account remained the same “with minor variations” and a few confusing details (like her memory of the waiting room being filled with people) until her death in 1989 at age 72. Meanwhile, Sam Phillips didn’t comment about the matter until 1979, when he first stated that he was the one operating the disc-cutting machinery.

All three of the people in the studio that day are now gone: Phillips died in 2003, aged 80, and, Elvis Presley died in 1977 at the young age of 42. In the footnote, Guralnick wrote that he didn’t believe any proof was possible without a “credible, impartial witness,” and none has come forward, despite the crowded waiting-room story. He said:

“I would like to think that this is simply a dispute on a specific point of fact between two honorable people who simply have remembered a scene, which could scarcely have had much significance to either one until long after the event, in different ways. The reason that I have chosen the version that I have presented is that it best fits Marion’s ‘crowded room’ scenario, while allowing both Sam and Marion to fulfill the roles that were clearly theirs: Marion, as Elvis portrayed her, was the one who listened, the one who responded to his need, and he was always grateful to her for this. Sam, as Marion conceded in every word, gesture, and deed, and as Elvis himself consistently indicated over the years, was solely responsible for the music. … Who flicked the switch simply should not represent an issue of earthshaking importance.”

Hmmm. I’m sympathetic to Guralnick wanting to be kind to both people, especially Sam, who was still alive when the book was published. And it’s true that the identity of the person who started up the equipment on that day in 1953 doesn’t alter the course of Elvis’s life story. That said, when I imagine myself in Keisker’s place, the knowledge that I flicked the switch would matter to me. Also, Marion never tried to claim undue credit for Elvis. In a 1981 conversation with Guralnick, she said she never had Phillips’s taste in music or his vision. Instead, she said she was “enamored” of Sam and just wanted to make him happy. With that in mind, it seems significant to me that starting in the mid-1950s, only a couple of years after the event, Keisker consistently said that she initiated the recording. Meanwhile, Sam said nothing for decades. I’m going to rule in Keisker’s favor here.

Now I want to know which story Sun Records is going to tell! The first two episodes are available on CMT’s website. New episodes air on Thursdays at 10 p.m. ET.

You might also like
My Best Dressed at the SAG Awards: So Easy!
Thank You, Levi Johnston's Penis!
Olivia Colman's Dress; Week in Review
Previous Post: « Social Media Advice From Wendy Brandes and JCK
Next Post: The Weeks in Review »