This year has robbed us of David Bowie, Prince, Muhammad Ali, our faith in our democracy — the list of obituaries goes on and on.

In the fashion world, Bill Cunningham, the original street-style photographer, was a huge loss. But if there’s a fashion heaven, Bill is no doubt giving a warm welcome to two other icons from the industry. Groundbreaking model China Machado died on Sunday at age 86(-ish) of cardiac arrest. The daughter of a Portuguese father and a Chinese mother, Machado became the first model of color to appear in Harper’s Bazaar in 1959, photographed by the great Richard Avedon after he spotted her in a fashion show. She was in her late 20s at the time — that’s retirement age for many models these days. In contrast, Machado continued defying prejudices and didn’t retire at all. Well, she said she retired but she still had representation and still booked jobs. At 81, she struck a fierce pose in a one-sleeved look for the cover of New York Magazine. 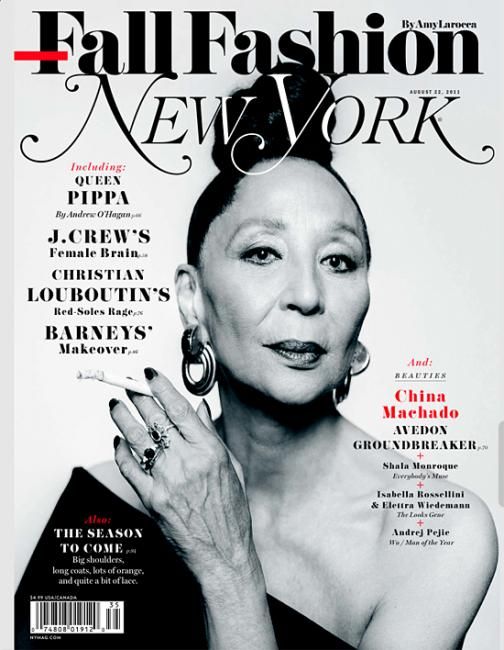 Two years later, she was doing a Cole Haan ad. There was also a spread in W and a Barneys ad. Modeling wasn’t all Machado did professionally though. First, Avedon convinced her to become Bazaar’s senior fashion editor.  After eight years of that, New York Magazine said, Avedon moved to Vogue, while his muse/colleague/friend “went on to produce fashion TV shows, design costumes for films, and crisis-manage as fashion director of Lear’s, a magazine for women over 35 founded by Norman Lear’s manic-depressive ex-wife, Frances, that lasted a miraculous six years before Lear ran it into the ground. Machado would frequently rejoin Avedon to produce and style ads for Revlon, like his ‘Unforgettable Women’ campaign, featuring her successors Beverly Johnson and Iman.” After that, she had a store and gallery, and invested in real estate. And that leaves out her tumultuous childhood experiences and a wild personal life that included an elopement with a famous bullfighter.  Machado gave great interviews, so it’s best to read those stories in her own words:

The Telegraph interview starts off with Machado saying, “I’ve never dieted, never exercised, I eat like a pig, and I drink – mainly vodka … I still smoke, too.” Later in the story, she’s quoted as saying, “I have some regrets that I might have hurt men in my life. But they can take care of themselves.” Bwah! Why did I never get to meet this woman?! Here’s one last fact that offers insight into Machado’s bad-ass attitude: She was born Noelie Dasouza Machado, and adopted the name China (pronounced “Cheena”) when she started modeling. As W described it, “In South America she had heard the Indian girls referred to derogatorily as chinitas. She decided to turn the slur into a moniker that pulsed with exotica.” Take that, haters!

While Machado had a long and very full life, I feel like Franca Sozzani — the longtime editor-in-chief of Italian Vogue — was taken from us much too soon at age 66 after a year-long illness.

Like Machado, Sozzani was unapologetic about her unwillingness to conform to expectations — starting in the early 1970s, when she got a degree in literature and philosophy (her father didn’t approve of her original plan to study physics); annulled a brief, early marriage (divorce was almost impossible in Italy at the time); and traveled to India and London. She found her way into the world of fashion magazines via Vogue Bambini, a children’s clothing publication. She took over the magazine Lei in 1980, followed by its men’s edition two years later. In 1988, she took over Italian Vogue and stayed. Starting at Lei, she boosted the careers of photographers including Mario Testino, Paolo Roversi, the late Herb Ritts, Peter Lindbergh, Bruce Weber, and Steven Meisel. Her bond with Meisel might have been the strongest of all: Vogue says he shot nearly all her covers. Those who are familiar with the 1990s supermodels know that Meisel also had a strong bond with my favorite model, Linda Evangelista, who made so many appearances in Italian Vogue that Sozzani said readers wrote to her asking what would happen to the magazine if Linda ever got sick!

The images of Linda and other models were always bold and often controversial. Sozzani was guided by two principles. First, the image was everything.  As she once asked, “Why would anyone buy Italian Vogue [to read]? They wouldn’t—only Italians read Italian.” And those images had to be about more than product. “Fashion is much bigger than a dress,” Sozzani told the Financial Times in 2014.  “I am sometimes criticised for using moda for talking [about] other matters, but today fashion is enormous, everyone speaks of fashion or what is not fashion.” Among newsy issues she dealt with in the pages of the magazine were plastic surgery (a 2005 Meisel masterpiece featuring Linda Evangelista in bandages); racism (the 2008 “Black” issue used only black models and had to be reprinted due to its popularity); and climate change (a 2010 feature with Kristen McMenamy looking like a creature trapped in an oil spill).  Some of her ideas were more provocative than others. A 2014 take on domestic violence raised hackles, and a 2012 feature called “Haute Mess” was accused of being racist and/or classist. But Sozzani always stuck to her own vision. Her philosophy degree showed in her remarks in a 2012 issue of Interview: “I do the magazine that I think is correct. If you like this issue, I am more than happy. If you don’t like this issue, you will like the next because we do 14 issues a year. So once in a year you will love, no?”