I had a bad feeling about this.

When Carrie Fisher’s mother, actress Debbie Reynolds, issued this statement two days after Fisher had a heart attack aboard a plane from London to Los Angeles, I read between the lines.

Carrie is in stable condition.If there is a change,we will share it. For all her fans & friends. I thank you for your prayers & good wishes. pic.twitter.com/isXJqqFEB6

“Stable” sounded benign but “If there is a change” most decidedly did not. Not when it didn’t follow something like, “Carrie is resting comfortably, translating one liners into emojis for Twitter, and feeding hospital Jello to her beloved French bulldog Gary Fisher.”

Sadly, my first instinct was right and Carrie Fisher has died, drowned in moonlight and strangled by her own bra. That’s how Fisher said she wanted her obituary to read, regardless of how she actually died, in her book Wishful Drinking, adapted from her one-woman play of the same name. The line was the kicker for an anecdote about how on the first day of filming the first Star Wars movie, director George Lucas eyeballed her white costume and said, “You can’t wear a bra under that dress… Because … there’s no underwear in space.”

“I promise you this is true, and he says it with such conviction too!” Fisher wrote. “Like he had been to space and looked around and he didn’t see any bras or panties or briefs anywhere.”

Many years later, Fisher wrote, Lucas attended her Wishful Drinking show and came backstage to clarify the argument he had made to the then 19-year-old actress: “So, what happens is you go to space and you become weightless. So far so good, right? But then your body expands??? But your bra doesn’t — so you get strangled by your own bra.” That would make a “fantastic obit,” Fisher decided.

That brief passage captures so much about Fisher. She didn’t hesitate to point out how men treat women in her business, and she easily skewered their body obsession with relentless humor. Even as the insecure teenage daughter of scandalous Hollywood stars (her father, singer Eddie Fisher, left her mother for Elizabeth Taylor when Carrie was only two) — suddenly catapulted into her own out-of-this-world stardom — Fisher “established Princess Leia as a damsel who could very much deal with her own distress, whether facing down the villainy of the dreaded Darth Vader or the romantic interests of the roguish smuggler Han Solo,” as Dave Itzkoff wrote for The New York Times.

As for the notorious metal bikini she wore as Jabba the Hutt’s slave in Return of the Jedi, she neatly dismissed a recent, drummed-up controversy in a Wall Street Journal interview last year:

“The father who flipped out about it, ‘What am I going to tell my kid about why she’s in that outfit?” Tell them that a giant slug captured me and forced me to wear that stupid outfit, and then I killed him because I didn’t like it. And then I took it off. Backstage.'”

Also speaking to the Journal last year, Fisher said, “My best self isn’t an actress.” It was as a writer that she was most herself, hilariously confronting issues of celebrity, drug addiction, and bipolar disorder in both her semiautobiographical novels and memoirs. I haven’t read The Princess Diarist yet — she was returning from promoting that book in England when she fell ill — but I’m sure it’s as worthy as her other ones, and not just because she brought joy to “Carrison” shippers all over the world by confirming that she had a three-month affair with co-star Harrison Ford while shooting the first Star Wars film. 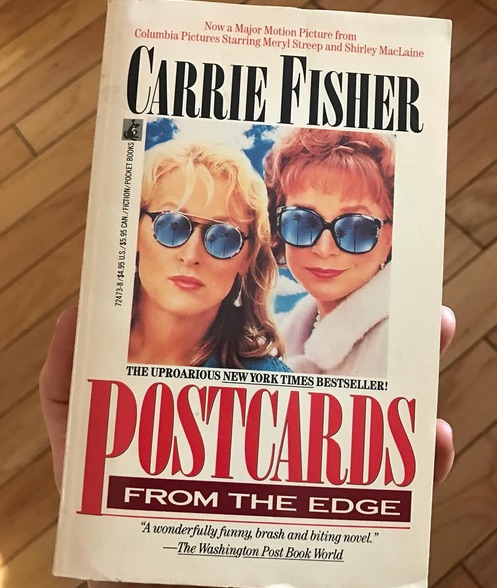 In addition to writing books, Fisher was a popular, uncredited “script doctor” in the 1990s. (Her tip for improving a script was, “Make the women smarter and the love scenes better.”) In 2008, she told Newsweek that she stopped doing the work when producers started requiring rewrite notes on spec with no guarantees of payment. (That stance gives me particular joy because it reminds me of people in my industry finally refusing to work on consignment.) Presumably, she learned not to be taken advantage of that way after signing away rights to her likeness in the Star Wars days. In a 2011 interview, she said she was resigned to the loss of her merchandising money — though she did add impishly:

“Every so often, I wonder if Natalie Portman is getting more money than the none I’m getting. If she’s holding a check for Princess Amidala’s likeness in one hand and her Oscar in the other, that would piss me off.”

Though writing was her preference, we’ll have a few final on-screen moments with Fisher. While in London, in addition to promoting her new book, Fisher reprised her role as an “awful mother” on the Amazon series Catastrophe. There are two episodes of Family Guy in which she voices Peter’s boss, Angela. (In an interview, she said working on an animated show was, “Dull, except they have candy.”) More significantly, she had finished shooting her role for the eighth film in the Star Wars franchise. That movie is due out next December. The ninth episode is set to begin filming in 2018; according to Variety, she was supposed to appear in that one too. The character of General Organa will be missed. That’s who Fisher played, starting with 2015’s The Force Awakens. Even though Leia was never a traditional damsel-in-distress, it meant a lot to see the character evolve from a princess without a bra to a general leading the Resistance. A woman for our times.

There are also interesting stories about Carrie’s father, Eddie. As she pointed out, he too was bipolar and a drug addict.

Q: "If you could use the force in real life what would you do?"

Carrie Fisher: “I would make Trump go away" pic.twitter.com/0TN9ME3hC7

Don’t forget to watch When Harry Met Sally, which I saw for the umpteenth time a couple of days ago. I’m positive Fisher’s character of Marie is the best of the best friend roles in the rom-com genre. Watch her get out her Rolodex of single men the moment she finds out her friend Sally is single. There was no time to waste, she warned:

“The right man for you might be out there right now and if you don’t grab him, someone else will, and you’ll have to spend the rest of your life knowing that someone else is married to your husband.”

The late Nora Ephron wrote that movie. If there’s a writers’ heaven, Nora and Carrie are sitting down at Dorothy Parker’s round table, and the bon mots are flying.

UPDATED TO ADD: Carrie Fisher’s mother, Debbie Reynolds, died of a stroke at 84, a day after her daughter’s death. “She wanted to be with Carrie,” her son, Todd Fisher, said to Variety.

My daughter Carrie is beautiful as she looks down at one of LA's favorite delis. The whitefish is strong in this one https://t.co/IgCTLOYHxc