In 2013, I wrote a piece for the Huffington Post about the surprisingly long life of fashion trends — a story that grew out of my “Never Is the Next New Thing™” adage.

For the story, I spoke to Sheila Aimette, vice president of U.S. content for WGSN, a trend-forecasting company, who said, “The lifespan of trends is just not within a six-month period. Things start slowly on the designer end and it takes several seasons for it to take off.”  Red Godfrey, vice president of the fashion office at Nordstrom, told me trends can last a particularly long time in certain categories where consumers take a while to adjust to what’s new and then want to stick with that. Valerie Steele, the director and chief curator of The Museum at the Fashion Institute of Technology, said, “The longevity of a trend has to do with it appealing to multiple categories of people.”

I was reminded of this today when I read the New York Times’s story on fall makeup trends. Fall’s hot looks, the story said, include “lipstick in wickedly unnatural shades like black, blue, green or yellow.” 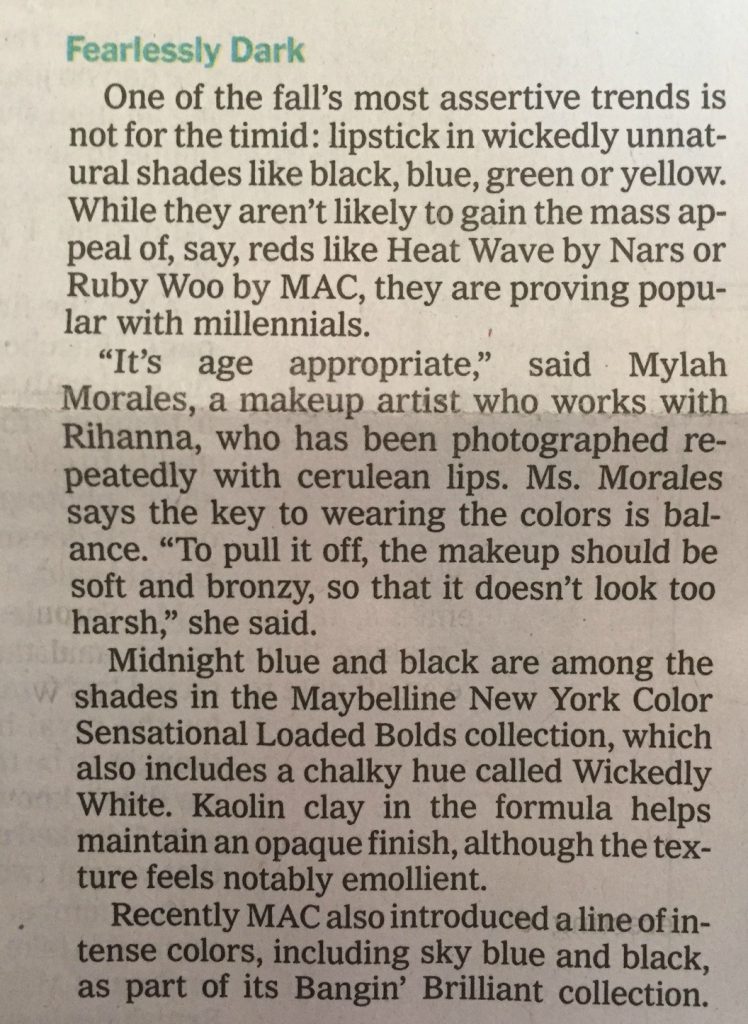 This made me think of another story I wrote for the Huffington Post, a year after the trend story. The 2014 piece referred to the singer Lorde, who was spotted wearing dark purple lipstick. The headline was, “Like Lorde: Indie Beauty Firms Offer Lipstick for Punk Pouts.” In the first paragraph, I wrote, “The daring beauty statement du jour is a purple, blue, black or green lipstick, and some of the best products are being sold by cosmetic companies you haven’t heard of yet.”  Those indie makeup companies included Melt Cosmetics, Portland Black Lipstick Company, Pretty Zombie Cosmetics, Ka’Oir Cosmetics, and the iconic Manic Panic. 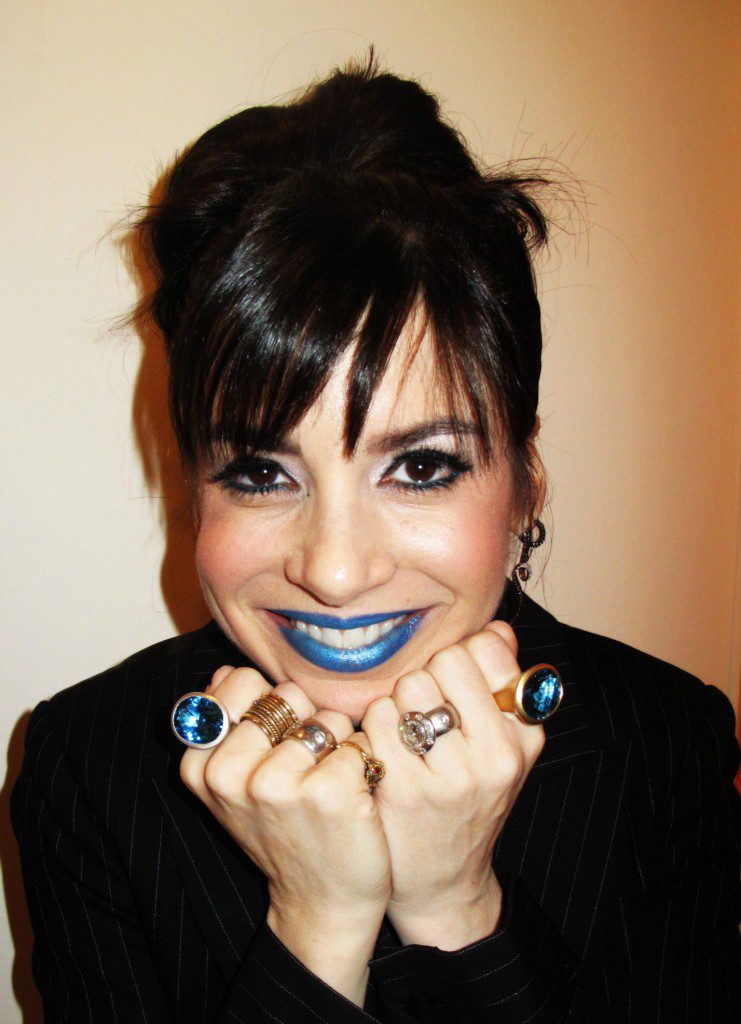 Two years later — as Sheila Aimette might have predicted — the look has gone mainstream. The Times reports that drugstore brand Maybelline is offering midnight blue, black, and chalky white. L’Oreal’s Urban Decay brand — which started out in 1996 as an indie with wild colors but has more recently emphasized its “Nakeds” neutral eyeshadow palettes — is returning to its roots by bringing back its glittery blue Frostbite lipstick for a limited-edition holiday collection. (When I was working on my Huffington Post story, I spoke to Urban Decay co-founder and current chief creative officer Wende Zomnir. She said of the original Frostbite, “We didn’t sell that much blue lipstick, but to kick down the door of the cosmetics department we needed to make that really bold statement.”) The Estée Edit — a younger-skewing line from the 70-year-old Estée Lauder company — includes “the Storm,” a “vivid teal lipstick,” that the Times calls, ” … flattering on many skin tones, even if it takes confidence to pull off. And MAC, which has been offering limited runs of wilder colors for years, including its 2013 Punk Couture collection, keeps expanding its selection. 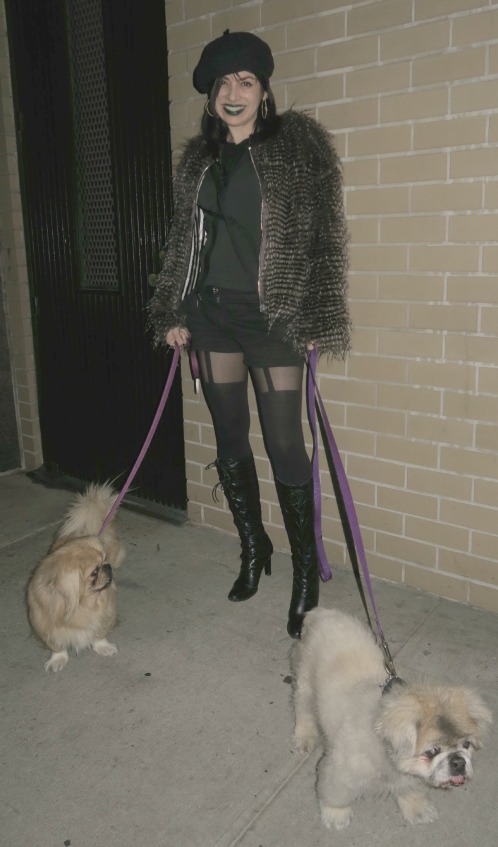 Worried that lips that aren’t red/nude/pink aren’t “age appropriate” for you?  Just you wait. Women used to say they were “too old” for skinny jeans too, but, once again, “Never Is the Next New Thing™.” And lipstick is less of an investment than jeans.  When I spoke to sisters Tish and Snooky Bellomo of Manic Panic, who have been selling punk-inspired hair dyes and cosmetics since 1977, they told me their customers range from tweens to women in their late 80s. “Try everything!” Tish advised. “You never know.” If it doesn’t work, Snooky added, “Wipe it off!” 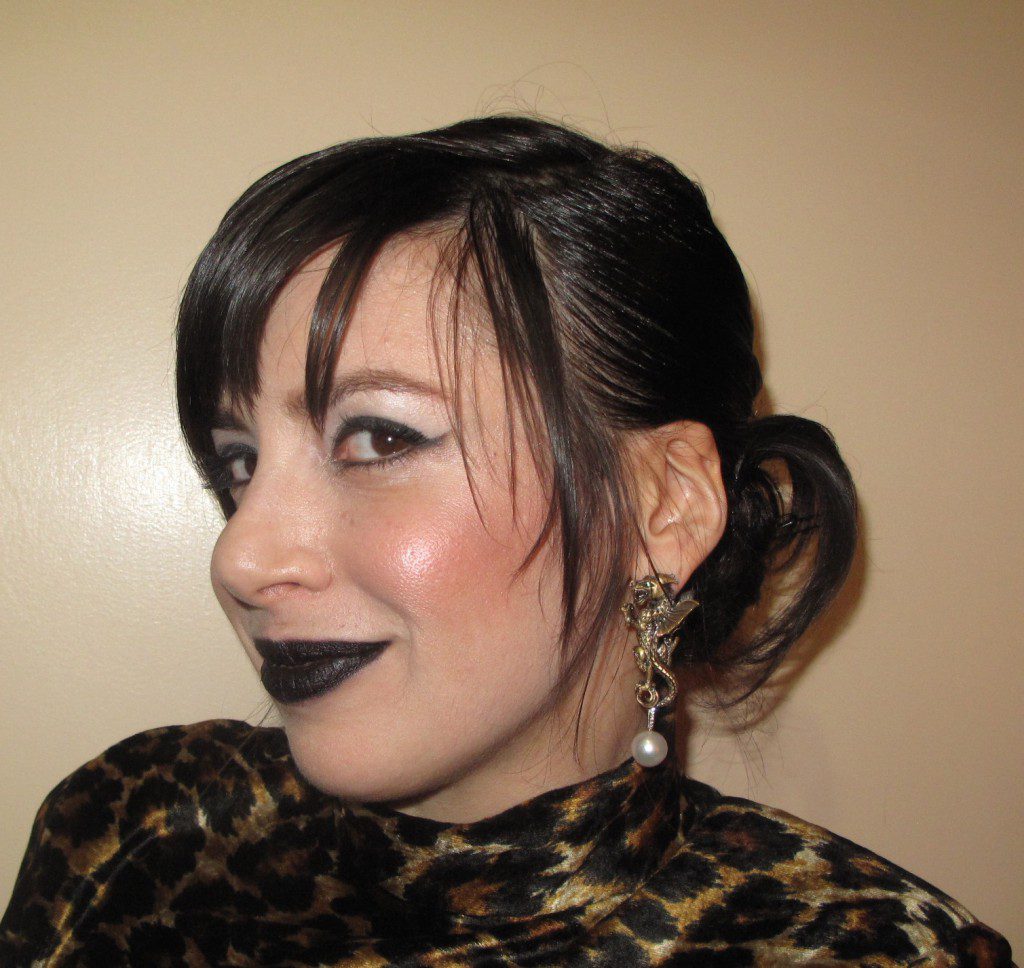 We’ve come a long way from 2010 when I simply could not find a satisfactory purple lipstick. Now I have half a dozen purple lipsticks in my possession, including Heroine, which MAC introduced in 2012 and added to its permanent collection in 2013. 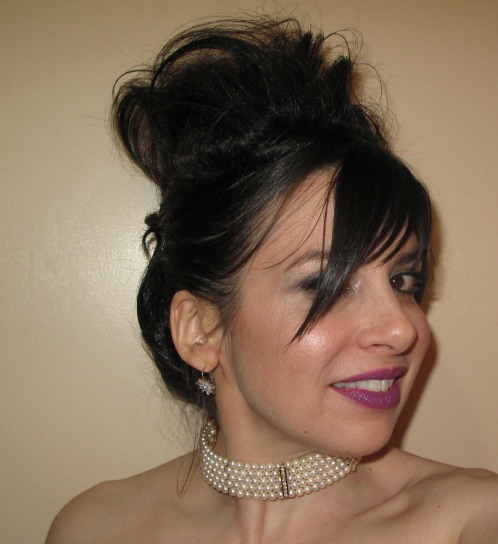 And we’ve come a long, long, LONG way from my first-ever lipstick story — which was for the Wall Street Journal in 1995.