I wrote that post to explain why my limited-edition jewelry designs — 99% of which are made in New York, which is where I prefer to manufacture for the sake of quality — are pricier than mass-produced jewelry made in other countries. What it comes down to is the cost of labor. As I wrote then: 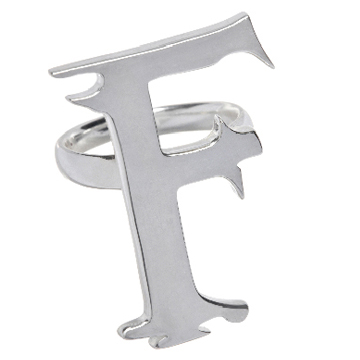 When I made 50 of these silver F rings overseas, I was able to charge customers $110 for the ring. If I make one in New York, I have to charge $220, without taking my full markup.

When I create intricate rings like the ones in my Maneater collection, the biggest cost in the U.S. comes from setting the hundreds of small stones. I’ve pointed out before that I pay a price to set each gem, and that it costs $10 or more (usually $12) per stone for the kind of expert setting I require. Overseas, it might cost $2 or less for the same setting work. I have used as many as 400 tiny gems in a design. Do the math! With a $12 setter here, labor alone costs me $4,800. In another country, it’s $800. That means that here in the U.S. I spend an additional $4,000 to set gems on a complicated piece, and that doesn’t include the cost of buying gems. It also doesn’t include the price of gold, the making of a wax model, the value of my labor — nothing. I still do these pieces in New York for reasons I mention here, but it is difficult to price my work the way I should when I see similar jewelry that was made in Hong Kong retailing for less than the cost of the setting job here.

No matter how I explain it, the scenario above with gem-setting is a little difficult for some people to understand — not everyone understands a retail markup, for instance — so I was weirdly thrilled when I stumbled upon a very simple example of the difference in labor costs. I’m currently making a set of 12 large, heavy silver pins for an individual (non-retailer) customer, using a U.S. company that has a factory overseas.  I would have to charge the customer $280 per pin to make the dozen pieces in the company’s New York factory. To make the same exact pin overseas — same material, same weight, same quantity, similar quality, same company — the price I will charge is $167 per pin, including shipping.

The pins are being made in Thailand, where a lot of jewelry is made. In Thailand, from 2013 to 2015, the national minimum wage was set at $9 a DAY. (In the U.S., the federal minimum wage is $7.25 an HOUR, with individual states able to set their own minimums, using the federal as a floor.) As Oxford Business Group wrote, the creation of the national minimum wage in Thailand actually drew “criticism from the [Thai] private sector due to the impact it would have on operating costs and competitiveness …” (The Herbert Smith Freehills website noted that the new minimum “amounted to a 100% wage increase for workers in some provinces who previously had low minimum wages.”) Last year, it was announced that Thailand would return to its former system “in which wages across the country were set depending on the cost of living and the economy in each of the 76 provinces.” (I don’t know how that alleviated any local business concerns because $9 was still supposed to remain the minimum, but maybe it’s about the illusion of choice.)

To people familiar with manufacturing, the only surprise here is that I’m able to make such a small quantity of pins overseas at all. Normally, the lower the price of a product, the more you have to produce in order to make it worth the factory’s while — the term for that is economies of scale.  The lowest overseas minimum I ever had before was 50 units, but this company’s New York office was eager to work with me. That said, this company still requires a dozen of every style I’m doing, even if I’m doing the work in New York, so I’m currently working with my original New York manufacturer on some new earrings because I only want one or two of each style.

Even with a dozen units, I’m talking about insanely low quantities here. Seriously, no one produces 12 of anything overseas! It’s much more likely for goods to be ordered in runs of 10,000 or more. In 2005, the Wall Street Journal reported that a “small” order of pens for Walmart was 48,000 units. A lot of jewelry manufacturers in New York don’t have the capacity to fill that a huge order like that. That’s an overseas job for sure.

For megastores, lower costs apparently aren’t the only alluring thing about overseas manufacturing. I was alerted to another reason recently by a U.S. company that successfully sold holiday-related products to a huge retailer. The retailer sent the U.S. company’s product to a Chinese factory, which then duplicated it. Sort of. The size came out wrong, the material was lesser quality, trim was left off, the packaging wasn’t included, AND the cost to the retailer was $2 more a unit. Say what?!?! The person who worked with the U.S. company explained to me via email that:

“… one factor that we discovered was that cash needed to leave the USA via manufacturing instead of paying  companies like us, here in the States. It needed to stay overseas for manufacturing corporate ‘benefits’ to be used for the next season, etc. … after some time this would become non-reportable…very complex!”

I’ve got to investigate that kind of situation more. This is some complicated shit. And it’s on my mind because of politicians saying they’re going to bring manufacturing back to the U.S.

Energetic crowd at the Macomb County GOP Lincoln Dinner! @realDonaldTrump and I are committed to bringing back American manufacturing! #MAGA pic.twitter.com/xs1SDGr0Ue

This irritates me. Repeatedly declaring that we’re going to bring manufacturing jobs back to the U.S. isn’t going to make it so if U.S. consumers refuse to pay U.S. labor prices. In the U.S., we’re blessed with a high standard of living. No one is going to work in a factory for the equivalent of $9 a day like people do in Thailand, or for $68 a month, like people do in apparel factories in Bangladesh. As long as American consumers value the low price of goods more than quality, we’re not going back to the heyday of U.S. manufacturing. Even as some manufacturers do come back or emerge in America, those efforts are dwarfed by what’s going on offshore. Car manufacturer Ford is an interesting and complex example. In the first presidential debate, Donald Trump said:

“Our jobs are fleeing the country. They’re going to Mexico, they’re going to many other countries … So Ford is leaving, you see that their small car division, leaving. Thousands of jobs leaving Michigan, leaving Ohio, they’re all leaving.”

Ford’s chief executive officer Mark Fields retorted that “zero” jobs will be lost in the U.S., adding that “it is really unfortunate when politics get in the way of the facts.”

As the New York Times explains in a front-page story today, Ford IS shifting production of small cars from its plant in Wayne, Mich., to a new plant under construction in Mexico. (There will be 2,800 jobs created at that Mexican plant.) However, the Wayne plant will remain open to meet growing demand for SUVs and “crossovers.” In reporting on the debate comments last month, the Detroit Free Press noted, “Automakers have historically struggled to make a profit off small cars produced in the U.S., in part because labor costs are higher than in Mexico.” (Bold emphasis is mine.)

In his response to the Trump remarks, Ford’s Fields reiterated the company’s tentative 2015 agreement with the UAW that called for a “$9-billion commitment to its U.S. plants and commitment to create or retain 8,500 jobs over the four years with new vehicles, engines and transmissions planned.” But, of course, it all depends on consumer demand. You can’t keep making vehicles if no one is buying them and on Monday Ford announced that it would trim some truck production and idle some factories for one to two weeks (including two plants in Mexico) amid a slowdown in U.S. light-vehicle sales.

You know what work would HAVE to be done in the U.S.? Improvements to our infrastructure. We’ve got poisoned water, roads that need fixing even if they’re not “crumbling,” collapsing bridges, and speeding trains that crash because they don’t have automatic braking. It makes much more sense to me when politicians focus on this issue as a way to increase manufacturing-type jobs in the U.S. That doesn’t mean it is an easy or straightforward task — no one can guarantee that spending X amount of money on infrastructure will generate Y amount of jobs. But it’s a lot more realistic than asking consumers to volunteer to pay $280 for a pin that they can have for $167!

UPDATED TO ADD: I added the information on gem-setting after I originally posted this.

You might also like
No Watanabe Jacket for Capricorns, Plus Simon Spurr News
Hey, New York Democrats! It's Time to Vote!
Get Informed and Inspired With Politics 101
Previous Post: « Thrifty Wendy Brandes Jewelry on JCK Online
Next Post: Throwback Thursday: Versace Skirt With Staying Power »