Last year, the name “Simone” was number 820 on the list of popular names for baby girls in the U.S. I expect that in 2016 and 2017, that name will be several hundred places higher, thanks to the awe-inspiring Olympian Simones. 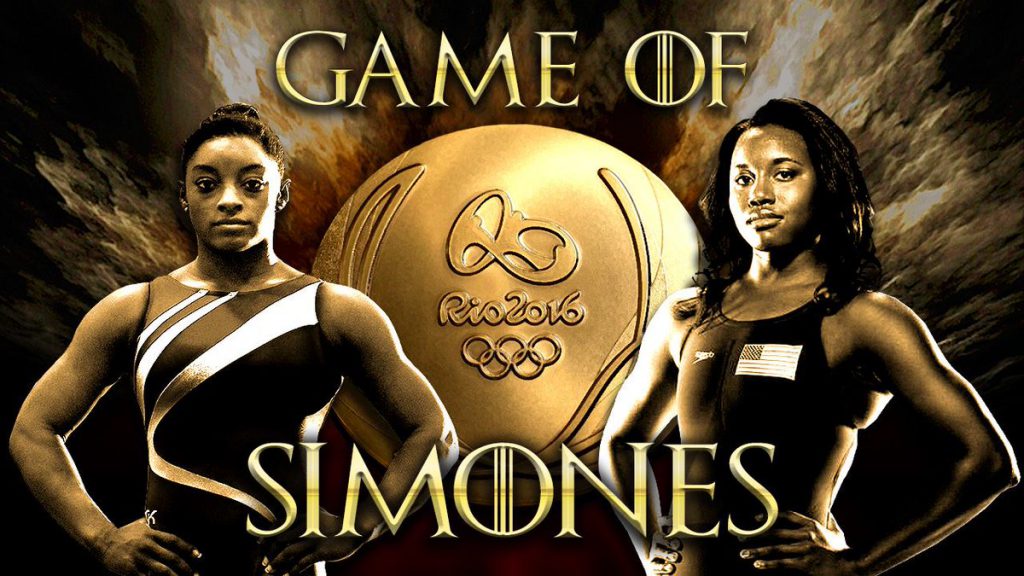 Gymnast Simone Biles won her fourth gold medal at the Rio Olympics today. Only three other female gymnasts have won four golds in a single Olympics — the last time it happened was 32 years ago! And you’d have to have a heart of stone if you didn’t get emotional last week when swimmer Simone Manuel became the first African-American woman to win an individual swimming medal at any Olympic Games.

I just hope these two women don’t suffer the post-medal backlash that Biles’s teammate, Gabby Douglas, has experienced. Douglas was a star of the 2012 Olympics in London, becoming the first African-American to win an Olympic all-around gold medal for gymnastics (she also won a gold medal as part of the U.S. team). She was also one of the many Olympic women abused for her appearance during those games. In Douglas’s case, it was her hair that offended certain onlookers. Only 16 at the time, she bore the negativity with remarkable good spirits.

Who knew that she would go through even worse at the 2016 Olympics? First, there was the drummed-up outrage over Gabby’s standing at attention — but not putting her hand over her heart — during the playing of the national anthem during the ceremony for the team’s gold medal.

All you have to do is spend a minute on Poodle searching for “national anthem hand” and you’ll see that people have been confused about the anthem etiquette for years. In 2012, so many people at the Super Bowl failed to place their hands over their hearts — players and spectators — that ABC News did a story about it. Before that, then-senator Barack Obama came in for criticism when he kept his hands down in 2007. You can see random-ass people debating the issue back in 2006 and 2010 here. People are all over the place on a gesture that came about in 1942 just because the traditional flag salute looked exactly like the Nazi salute.

So Gabby Douglas felt obligated to apologize for her actually-very-common anthem posture, but that wasn’t the end of it. Next, she was slammed for not looking enthusiastic enough when Simone Biles and Aly Reisman scored the top two places in the qualifying event for the individual all-around. Gabby finished third in that event, and only the top two scorers from each country get to move on, so she wasn’t going to compete in the event in which she had triumphed during the London Olympics. My guess: Anyone who is that disturbed by Douglas’s expression has never been in the running for a really big award. I can say from personal experience, it’s hard to control the disappointment — even in competitions that you don’t age out of by the time you’re 22. Yeah, you applaud and congratulate the winner but it can be a challenge to plaster on a big grin.

Of course, it’s no surprise when a woman is told to smile no matter how she’s feeling, but why was Gabby’s stoicism so much more offensive than various other Olympic reactions? (That’s a rhetorical question. We know why.) Chinese gymnast Shang Chunsong cried when she missed a bronze medal. The swimming star of 2012, Missy Franklin, had a disastrous time in Rio and wound up teary. Swimmers Lily King and Yulia Efimova wagged fingers at each other. Swimmer Michael Phelps laughed his way through one rendition of the national anthem, while his mean game face before a race was treated with affectionate humor. The latter was similar to the way that U.S. gymnast McKayla Maroney’s “unimpressed” silver-medal face became a light-hearted meme during the 2012 games. 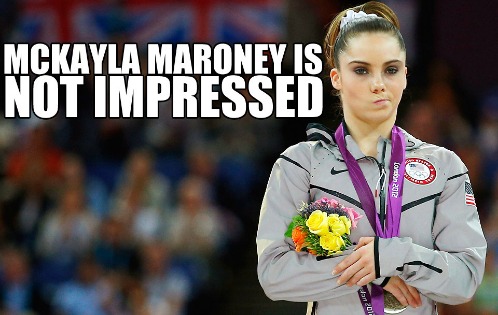 Meanwhile, Douglas was still getting criticism about her hair in addition to everything else. Personally, I couldn’t tell you a single thing about any of the gymnasts’ hairstyles, except that the hair was all pulled off their faces. I was too busy watching them defy gravity with their bodies. Seriously, people, it’s a sport — a sweat-inducing, very difficult sport! — not a hair-styling convention.

After her last event, Douglas’s eyes welled up as reporters asked her about the criticism that had become a bigger story than her gymnastic skills. She wound up apologizing again for her facial expression. I’m glad comedian Leslie Jones — who recently endured social-media attacks herself — launched a #LOVE4GABBYUSA hashtag on Twitter so that Douglas could see there are people out there supporting her. I’ll add my two cents. Gabby, research shows that parents everywhere are right: People do put you down because they feel bad about themselves. Low self-esteem also increases existing racial prejudices. In other words … 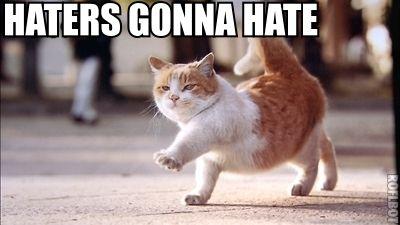 You might also like
Feminist Jewelry for the Holidays: Last Call!
September 11, 2017: "We Go Higher"
Stay Away. 150 Yards Away.
Previous Post: « Non-Buyer’s Remorse: Pucci Boots
Next Post: Behind the Scenes: Platinum in the Park »