Before my parents moved out of my childhood home in 2013, I retrieved some of my old things from their basement and various closets.  I found a lot of letters. During high school, I had pen pals in England, and I was always running to the mailbox to look for a blue airmail envelope. 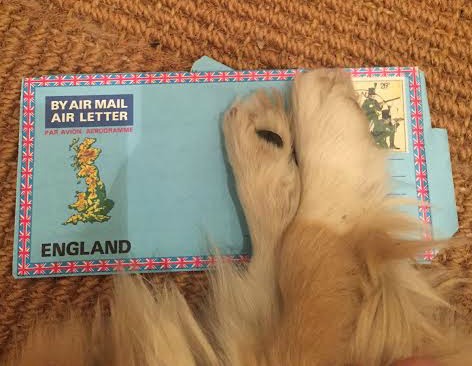 Edward the dog doesn’t want you to see my old address.

Who gets letters nowadays? You get a birthday card if you’re lucky. Other than that it’s holiday cards with pictures of people’s families; bills; and catalogs. Speaking of catalogs, why does J. Jill think I’m a potential customer? Every time I get their catalog, I’m like, “Why the hell am I getting this catalog? This isn’t my style.” But my motto is “Never Is the Next New Thing™,” so I suppose I can’t rule anything out. Keep trying, J. Jill! Maybe I’ll break down.

Anyway, I recently got something better than a bill. It was a promotion from the American Gem Trade Association for the 2016 Tucson Gem Show. On it was a photo of my very own Pink Elephant and Tipsy Writer Maneater ring, which won honorable mention in the 2015 AGTA Spectrum Awards design contest. 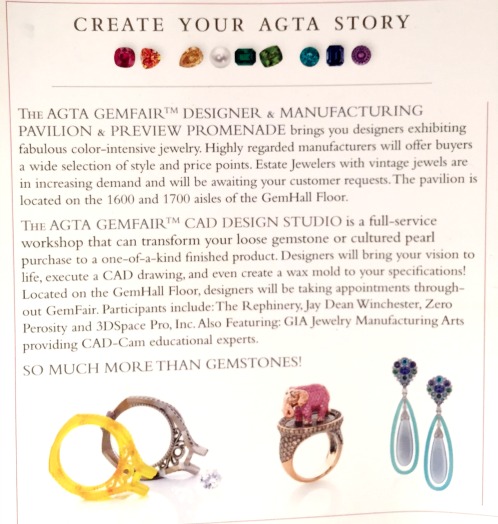 How cool is that? Also, the earrings to the right of my ring are by designer Deirdre Featherstone, who I hung with earlier this month. Those won first place in the bridal category, so I am in great company.

The Spectrum contest calls for designs that make extensive use of colored gems. My entry for 2016 was my new Dragon and Knight Maneater ring, which didn’t win. Alas! But I got great feedback from the journalists who saw it in person, so that was a bit of consolation. I’m already thinking of what I’m going to enter for the 2017 contest, of course.

You might also like
Wendy Brandes Jewelry Fall 2012 Lookbook
Customer of the Day: Terri Berry and Her Fruit Necklace
Wendy Brandes Hashtag Ring on Gangsta Boo
Previous Post: « Peace and Love … and Cussing
Next Post: Almost as Good as SkyMall »