I’m pleased that the women’s U.S. soccer team will get a Manhattan ticker-tape parade Friday in celebration of its World Cup win.

On the other hand, if I were on the team, I might be thinking, “Fuck the ticker tape … where’s my money?” As has been widely reported, female soccer players make much less than their male counterparts. For instance, soccer’s governing body, the delightfully corrupt FIFA, pays the winning women’s team a $2 million prize, compared with the $8 million it pays men’s teams that lose in the first round. And that’s despite the fact that this women’s World Cup final was the most-watched soccer game in the U.S., ever, grabbing a substantially bigger American audience than this year’s basketball and hockey finals.

(By the way, I’m not sure how I feel about troubled goalie Hope Solo having played at all; can’t all the U.S. sports leagues come up with consistent standards for off-court/field behavior? Is it that hard to say across the board, “We will suspend or fire your ass if you do drugs, beat your significant other, assault your relatives or blow yourself up with fireworks?” Yeah, that last one might not be against the law but it’s criminally idiotic.)

While the U.S. women are being screwed financially, they’re still winners … and, as a bonus, haven’t been subject to the likes of the official “supportive” tweet that England’s women got from the English Football Association. 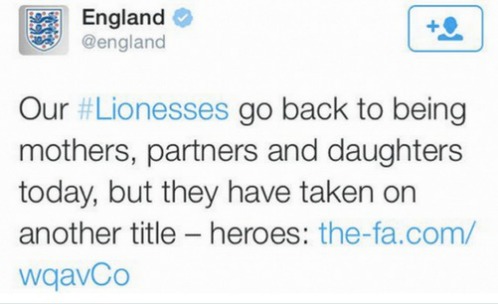 After everyone’s heads exploded over this sexist shit, the association deleted it. Later, according to the BBC, the FA tried to defend itself by “saying the tweet linked to an online article on the FA’s website about the players being reunited with their families. The line about ‘mothers, partners and daughters’ originally appeared in that story as well, but was later edited out.”

The BBC quoted an FA spokesman as saying:

“The full story was a wider homecoming feature attempting to reflect the many personal stories within the playing squad as has been told throughout the course of the tournament … However, we understand that an element of the story appears to have been taken out of context and the opening paragraph was subsequently revised to reflect that fact.”

As you can see for yourself, that story by James Callow, as it reads now, makes no mention of the players coming home to assume traditional lady roles. The only quote referencing family is from defender Laura Bassett:

“Everybody is looking forward to going back home and just reflecting on what we have done – speaking about it with friends and family and enjoying some home comforts.”

Bassett went on to say how excited she was to be an inspiration.

“The fact that people are going out and getting our names on the back of their shirts and wanting to score goals like [right-back] Lucy Bronze is just brilliant.”

And her teammate Bronze said, “”If in 10 years’ time I can say that I made a difference and that some little girl has become the best player in the world then that’s fine by me.”

From this, someone said, “Aha! It’s all about being a mommy!” (It’s making me literally LOL that the last name of the bylined writer means “immature or inexperienced.”) True, it’s not blowing-off-your-hand-with-fireworks stupid, but it’s pretty fucking stupid!

You might also like
Super Halftime: The Shakira & J. Lo Show
Important Health Tip From Courtney Love
Get NASTY Now! And Some Protest Tips.
Previous Post: « Read All About Me on The Gem Therapist
Next Post: Throwback Thursday: Blonde Bangs in 1983 »