I’ve been meaning to write about the Taylor Swift concert I attended on July 11, when I had to chaperone a major fangurl all the way to MetLife Stadium in New Jersey … 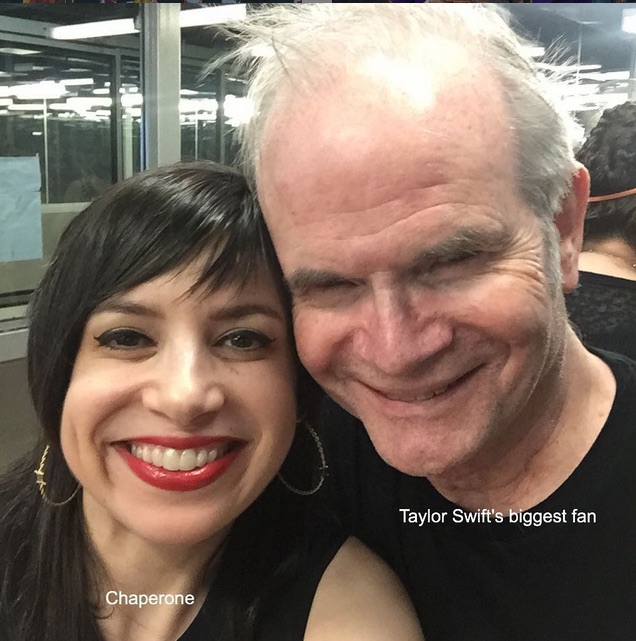 … but I was lazy about getting all my concert photos watermarked. However, there’s no time like the present to get organized, what with Taylor getting into a Twitter feud with rapper Nicki Minaj. It started Tuesday, after the nominations for next month’s MTV Video Music Awards were announced (amusingly enough, on Apple Music’s Beats 1 radio instead of MTV).  Taylor led with nine nominations — two for her “Blank Space” video and seven for “Bad Blood.” One of the “Bad Blood” nominations was for Video of the Year. The other Video of the Year nominees were Beyonce for “7/11“; Ed Sheeran for “Thinking Out Loud“; Mark Ronson, featuring Bruno Mars, for “Uptown Funk“; and Kendrick Lamar for “Alright.”

“Anaconda” went viral before the video even debuted, thanks to the cheeky cover art, which was released last July. 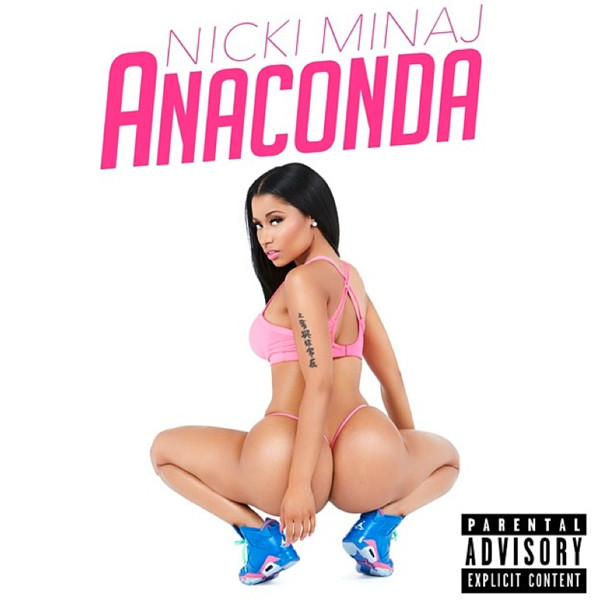 Illustrating the line “baby got back.”

That shot of Nicki provoked OG rapper Lil Kim to renew her complaints that Minaj was stealing her style. Memes came fast and furious, including one that turned Nicki’s buns into the “OO” in the Google logo. Nicki directly responded to criticism by tweeting the ass-flaunting cover of the Sports Illustrated bathing suit issue, pointing out that those smaller behinds were deemed “acceptable,” while her more ample curves were “unacceptable.” When the  “Anaconda” video came out the following month, it was viewed a record 19.6 million times in its first 24 hours, beating the 19.3 million views Miley Cyrus racked up in 24 hours for her “Wrecking Ball” video in September 2013. A week later, Nicki was on the MTV VMAs twerking to “Anaconda” live. Think pieces and reaction videos abounded. Even Ellen got in on the action.

It all added up to a huge pop-culture moment, so Nicki wasn’t pleased with MTV’s lack of recognition this week. She took to Twitter to express herself.

Well! Taylor Swift felt that last one was directed at her, seeing as three of the Video of the Year nominees are dudes and the fourth is Beyonce, Nicki’s collaborator on this year’s “Feeling Myself” video. Overlooking signs that Nicki was — for the most part — talking more broadly about race (Another tweet was, “Black women influence pop culture so much but are rarely rewarded for it“), Taylor replied.

Nicki answered, “Huh? U must not be reading my tweets. Didn’t say a word about u. I love u just as much. But u should speak on this. @taylorswift13” Taylor, possibly realizing she’d put her foot in it, tried to make amends by saying, “If I win, please come up with me!! You’re invited to any stage I’m ever on.” (And Taylor knows something about sharing a stage, after Kanye tried to snatch her VMA Moonman in 2009.)

Twitter went wild, of course, with a lot of people backing Nicki. Other folks said Nicki didn’t deserve any awards for scantily clad twerking, apparently forgetting that (a) hello, these are the VMAs and (b) twerk-loving Miley Cyrus’s extremely naked “Wrecking Ball” won Video of the Year last year (But Miley’s got one of those slim “acceptable” bodies, proving Nicki’s point. And, by the way, Taylor Swift’s own, wildly popular “Shake It Off” video features twerkers.) Nicki took Ryan Seacrest to task for saying she threw a jab at Taylor, while Taylor responded with love … leaving out Nicki’s “Love you too but I wasn’t talking about you” response. Katy Perry waded in to point out that “Bad Blood” is actually a jab at her, weakening Taylor’s initial point about not pitting women against each other.

“Nothing to do with any of the women, but everything to do with a system that doesn’t credit black women for their contributions to pop culture as freely/quickly as they reward others. We are huge trendsetters, not second class citizens that get thrown crumbs. This isn’t anger. This is #information.”

The big winner? Definitely MTV. For a music network that barely plays any music anymore, MTV has managed — intentionally or not — to generate a lot of interest around the VMAs for a couple of years.  This year could now be as big as 2013, when Miley outraged the audience by twerking all over “Blurred Lines” singer Robin Thicke. Remember the predictions that the performance would mean the end of Miley’s career? Remember how I disagreed? In fact, I said Miley would benefit from the controversy just like other performers had benefited from similar controversies in decades past. And I was right because guess who is HOSTING the VMAs this year? Miley Fucking Cyrus.

CLICK HERE TO READ MY PREDICTION ABOUT MILEY’S CAREER.

It turned out to be sleazy Robin Thicke whose career tanked within a year of that performance. One-hit wonder for real!

Anyway, it will be interesting to see if Nicki benefits from the drama the way that Miley did  … or, for that matter, the way Taylor did in 2009, after Kanye West crashed the stage to try to redirect her MTV Moonman award to Beyonce. All the sympathy went to Taylor. Even Obama stepped in to call West a “jackass.”

Taylor has been all about girl power and female bonding lately (as long as it doesn’t include Katy Perry) so I imagine she’s experienced real agony over her unfortunate “Tweet first, think later” moment. That concert I went to — remember the concert?! — was heavy on advice for building self-esteem and supporting each other. It was all so PG and positive! I hadn’t been exposed to any hardcore Taylor Swift fans besides MrB and I quickly learned all about their energy, enthusiasm, memory for lyrics, and dedication to costumes and in-joke light-up signs. 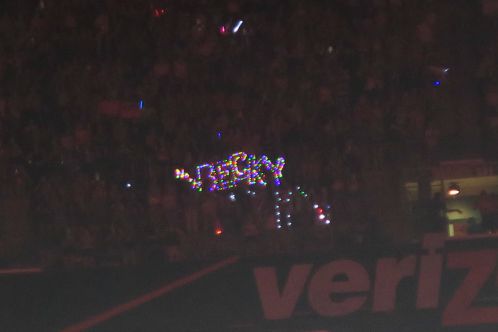 Don’t know who Becky is? Click to find out.

The bus ride to New Jersey was an experience.

People were even decorating their cars in Taylor’s honor.

I bumped into Columbia Spectator alums Finn Vigeland and Daniela Quintanilla while I was on a hot-dog run. 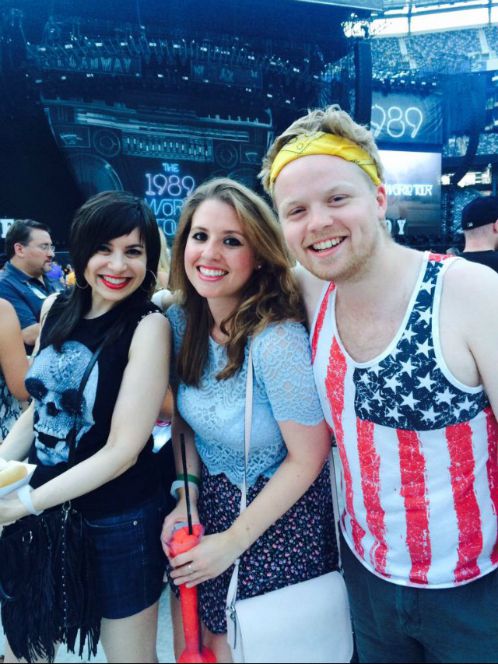 With Finn and Daniela.

Once we got seated for opening acts Shawn Mendes, Haim and Vance Joy, MrB developed some serious appreciation for the third-row tickets I’d gotten him as a Christmas gift. That said, third row wasn’t as great as it would normally be because of how much time Taylor spent on her center-of-the-stadium, elevated and rotating runway. That’s how NICE she is. She wanted to pay real attention to every fan at MetLife, including — and maybe especially — the girls in the nosebleed seats. 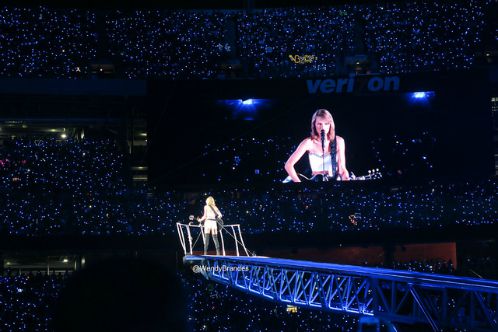 How she looked on the runway.

We still got some good up close and personal moments. 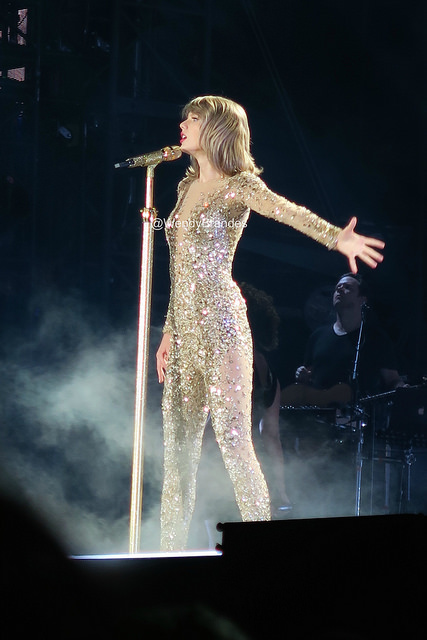 During costume changes, we were treated to videos of Taylor’s celebrity gal pals — including model Cara Delevingne, Selena Gomez, the sisters from Haim and Lena Dunham — talking about female friendship, love and (most interesting to me) cats. Taylor herself spent a long time giving pep talks to the audience about overcoming both self-doubt and external criticism. A loooong time. I’ve cringed over Madonna’s lengthy, incoherent political rantings in the past, but I think I prefer that craziness to this much self-help chat. It gets a little repetitive.

All these Kumbaya moments — oh, did I mention the video that showed Taylor baking cookies for listening sessions with fans? — made the confrontation with Nicki even more surprising to me. On the other hand, as I told MrB before, during and after the concert, it does seem like Taylor feels awfully put-upon for someone who is wildly successful, wealthy, talented, tall, skinny, white, blonde and conventionally beautiful. She has a history of gravitating to the role of underdog, from playing the sneaker-wearing, bleacher-sitting geek of 2009’s “You Belong With Me” …

… to the awkward dancer who gets picked on by the tabloids for her dating habits in last year’s “Shake It Off.”

That victim-y mindset can definitely make a pop star susceptible to taking certain tweets too personally. Sure, the slim body comment was a little swipe at Taylor — let’s be honest! — but it also covers Miley Cyrus and the Sports Illustrated/Victoria’s Secret model types that Nicki cited last year. (Taylor brought some of her Victoria’s Secret friends out on stage with her at my MetLife show; the night before, she had the winning U.S women’s soccer team.) And it was a relatively small part of the point Nicki was trying to make. Taylor would have been better off recognizing her advantages and keeping quiet or, even better, saying something supportive. With Taylor’s business savvy, I’m sure she won’t make a mistake like this again. The shock of coming off as the bad guy must have been terrible, plus it’s so off-brand! I’m going to guess that all the appropriate emergency public-relations and social-media-training meetings have already been held and everything will be hearts and flowers from now on. 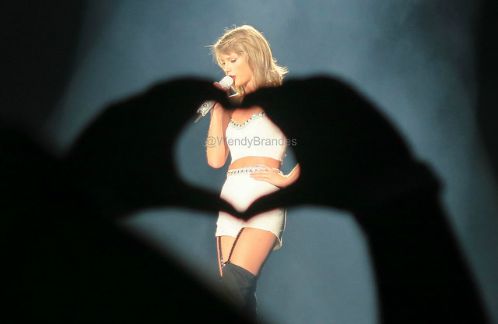 … and said it was time to move on.

I can’t wait to see Nicki and Taylor hit the stage together at the VMAs … you know that’s got to happen now!

UPDATED TO ADD: I’ve removed a reference to a video Taylor’s opening number, because IFPI, believe it or not, complained to YouTube that my crap video was violating their copyright. Obviously, I posted the video because I felt strongly it was fair use for criticism/commentary and, specifically, I wanted to show the fans’ ecstatic reaction to Taylor. I didn’t monetize it either on YouTube or here. I also think the recording would encourage people to listen to the original version or go to a concert, rather than deterring them. SMH.

UPDATED AGAIN TO ADD: I shouldn’t have been surprised by the video incident after the contract Taylor and her company wanted photographers to sign in order to cover her show. The contract demands that any news organization use any photos on a “one-time only basis,” and only through the end of this calendar year. On the other hand, Taylor and her business interests would have the “perpetual, worldwide right to use the published Photographs for any non-commercial purpose (in all media and formats), including but not limited to publicity and promotion on their web sites and/or social media accounts or pages.” You can read the whole contract on Consequence of Sound. Don’t miss the part that says Taylor’s people can destroy a photographer’s equipment without compensation.