Photographer Mary Ellen Mark died in Manhattan on Monday at age 75. She had myelodysplastic syndrome, a disease that affects bone marrow and blood.

Mark did everything from documentary photography to fashion photography and ad campaigns, but her best-known project was about homeless teens in Seattle.  It began as a 1983 LIFE magazine photo essay, created with writer Cheryl McCall, called “Streets of the Lost.”  The next year, Mark helped her husband, director Martin Bell, turn the kids’ stories into an Oscar-nominated documentary called Streetwise.  A companion book, also called Streetwise, came out in 1988. The cover of the book featured Mark’s iconic photo of Erin “Tiny” Blackwell in her “French prostitute” Halloween costume. 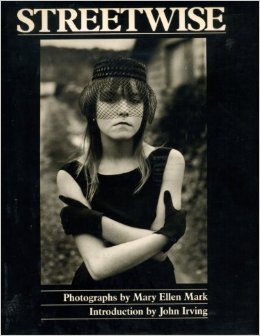 I remember that when I first saw the Tiny photos, I thought that they were from a high-fashion shoot. (In a 2008 interview with Vice, Mark herself said, “… it’s almost like a fashion picture but it’s real.”) But Tiny really was a prostitute — just 13 years old when Mark met her — who hit the streets of Seattle when her life with her alcoholic mother and violent stepfather became intolerable.

There were many street kids in Streetwise — I was particularly fascinated by Lou Lou/Lulu Couch —  but Tiny was the undeniable star of both the movie and the book. Mark and Bell never lost touch with her. In 2013, in recognition of the 30th anniversary of the initial LIFE photos, Mark and Bell successfully raised money on Kickstarter for a follow-up documentary, Tiny Revisited. By then, Tiny — now in her 40s — was off the street, off drugs, married, and the mother of 10 children.  The hardcover book, Tiny, Streetwise Revisited, is due out this October and, according to the Kickstarter campaign, the movie should be released at the same time.

In the meantime, this 2005 interview that Mark and Bell did with Tiny for Aperture is a good way to catch up (Tiny was at nine kids then). I love their rapport; it reminds me of Adrian Nicole LeBlanc and her long-term relationship with the subjects of her book Random Family. They’re people who come from very different worlds, but they have such a strong connection.

You can find out more about what happened to the kids of Streetwise from this Facebook group. Beth Smithe, who runs the group, recently reported that Tiny is going through a tough time. Her husband left and now, on top of that, she’s mourning Mary Ellen. Smithe set up a GoFundMe for Tiny to help out with a few bills (Tiny confirmed it on her own Facebook page here and here).

I’ve embedded a lot of great links in this post. I don’t want you to miss anything good so here’s a more organized list.

Finally, I enjoy looking at photos of Mark herself. Here is a picture of her at New York Fashion Week last September.

She was 74 then and still wearing her signature long, dark braids. I’m not surprised that she was a “Wear What You Want” type of lady.