Singer/songwriter/producer/everything Pharrell Williams sure knows how to get everyone talking with his fashion choices. In January, his Vivienne Westwood hat stole the show at the Grammys. In March, his tuxedo shorts made a big statement at the Oscars. Tonight, I was watching True Blood instead of the BET Awards, but when I saw “Uggs” trending on Twitter, I immediately thought, “Pharrell.” 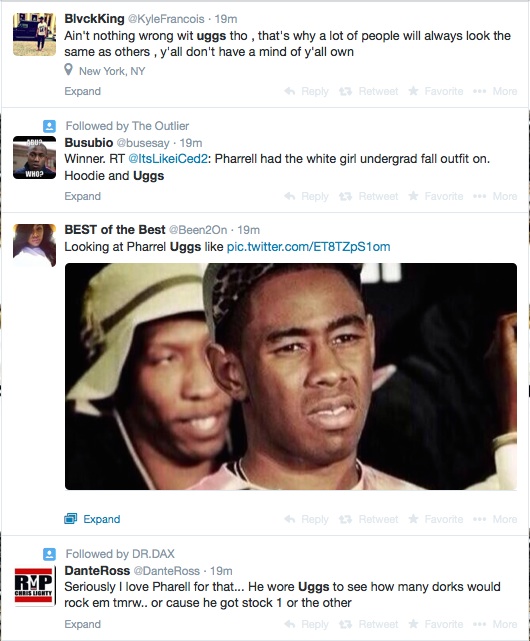 He’s actually been wearing these Uggs for a while. They made an appearance in tandem with one of his Westwood hats in April. But I guess these are the first awards show they’ve been to. As a result, I’ve had to read some dumbass comments from people saying that Pharrell is “gay” for wearing “girl” boots. (Uggs does make boots for men, but I’m not sure if this is a men’s or women’s style.) It reminds me of the 2012 BET Awards, during which homophobic viewers were agitated by Usher’s neon sneakers. So, once again, I will complain that folks these days are soooo fucking uptight. Being freaked out by a pair of shoes? Honestly? Someone take me back to the 1970s, when rock stars wore skintight jumpsuits. Y’all need to learn to let your freak flag fly. A little sartorial excitement adds spice to life!

You might also like
What Wendy (and Stevie) Wore: Fleetwood Mac at MSG
Throwback Thursday: The 2006 Photo of My 2016 Oscars Dress
Throwback Thursday: Harry Chapin and Wonderama
Previous Post: « The White (Gold) Sale
Next Post: Having a Jeff Koons Moment »