Columbia University’s 2014 commencement ceremony took place yesterday. (To celebrate, the Empire State Building was lit in the school colors of blue and white.)

This year is a big anniversary for my own graduation from Columbia University, which took place on May 17, 1989. I can’t stand to say the actual number of years because I’ve been out of college for longer than some of my young friends have been alive, so do the math yourself! This tiny photo was taken the day before commencement, on Class Day, when the individual schools that make up Columbia University have their separate graduation ceremonies: I graduated from Columbia College.

Author Herman Wouk (The Caine Mutiny) spoke at the Columbia College Class Day that year. I had to look that up. All I remember is that it was pouring rain that day. In the photo I’m cradling an umbrella along with my cap.

Commencement Day — which is for the entire university — started out dreary too, but, clearly, my future was so bright I had to wear shades.

The sun came out as the ceremony got underway. By the time it was over and the crowds had dispersed, it was so hot that I shed my cap and gown and put on a pair of high-rise shorts that would be surely be the envy of any 20-something Brooklyn hipster these days. Here I am posed next to the statue of Alma Mater. 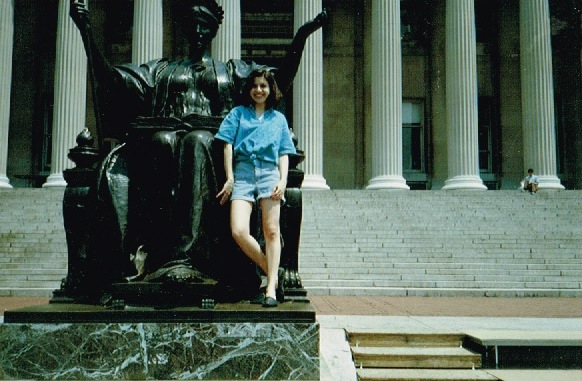 Columbia College didn’t go co-ed until 1983 (the news was announced in January 1982), the last of the eight Ivy League schools to do so, even though the issue had been first considered over a century earlier, in 1879. As Shira Boss-Bicak reported for the alumni magazine, Columbia College Today, in 2009:

“Instead, the school created the Collegiate Course for Women in 1883, allowing women to enroll in a home-study program and sit for the exams alongside male students for the same credit. Several women earned bachelor’s through CCW, the first in 1887. One CCW student, Annie Nathan Meyer, was instrumental in the formation of a college for women at the University. Barnard opened in 1889, and would ultimately and ironically turn out to be the main impediment to making the College coeducational.”

In other words, after the launch of the prestigious, all-women, liberal-arts Barnard College — a part of Columbia University that is still situated right across from the main university campus — there were fears that allowing women into Columbia College would hurt Barnard by siphoning away its students or forcing it into a de facto merger. However, my “Never Is the Next New Thing™” rule ultimately applied and, as Columbia College Today reported, “The decision to become a coeducational college markedly improved Columbia, and didn’t harm Barnard, which has maintained its separate and vital identity as a women’s college.” 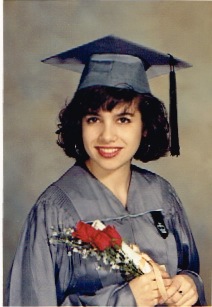 My yearbook photo. Not my best look.

“A vanishingly small number of students came to Columbia College because it was an all-male college, and many came because they had been led to believe that Columbia and Barnard students’ lives were more together than they actually were.”

Steve Cohen, a member of the last all-male entering class of 1986, told Columbia College Today, “There were Barnard women, but really they were sequestered from us … It was a very heavy workload, and it was basically joyless.” Given that, I don’t know why a few assholes would look my leggings-and-t-shirt outfits up and down and say in a nasty way, “You must go to Barnard. You’re wearing the uniform.” WTF? Did those guys ever get laid with that line? I liked answering, “No, I go to YOUR school” before flouncing off (See? I’ve always loved taking ownership of men’s stuff). Because of that crap, a highlight of my graduation was the protest banner created by Laura Hotchkiss Brown that added the names of seven great female authors — Sappho, Marie de France, Christine de Pizan, Sor Juana Ines de la Cruz, Bronte, Dickinson, and Woolf — to the facade of Butler Library, above the inscribed names of eight important male thinkers. I am sure I took my own photo of that moment, but I haven’t found it yet, so you can see a picture from the library in the post I wrote last year, when MrB received his honorary Doctor of Laws degree from Columbia University.

Congratulations to all the 2014 Columbia University graduates! Don’t fear that your best years are behind you. I’ve found post-graduate life to be a lot more fun than college. More money, less studying. You can’t go wrong with that.