My designing friend Zang Toi (pronounced “Toy”) presented his Fall 2014 collection at the tents at Lincoln Center last Wednesday. Zang is often inspired by places and eras, and this season’s inspiration was 1930s Shanghai, aka the “Paris of the Orient.”

Highlights included the sleek trouser suits Zang does so well … 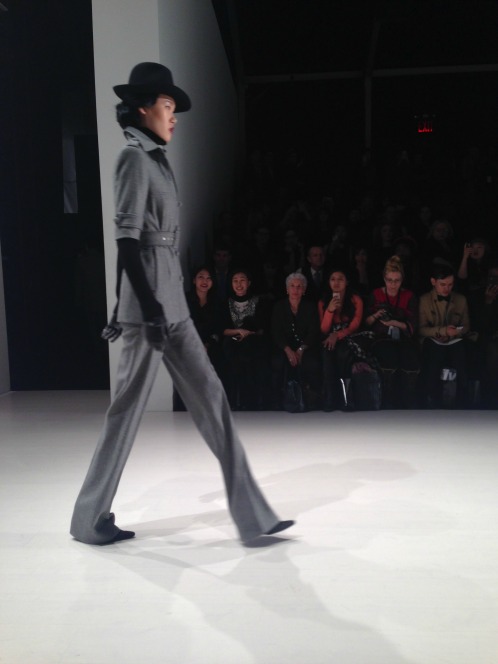 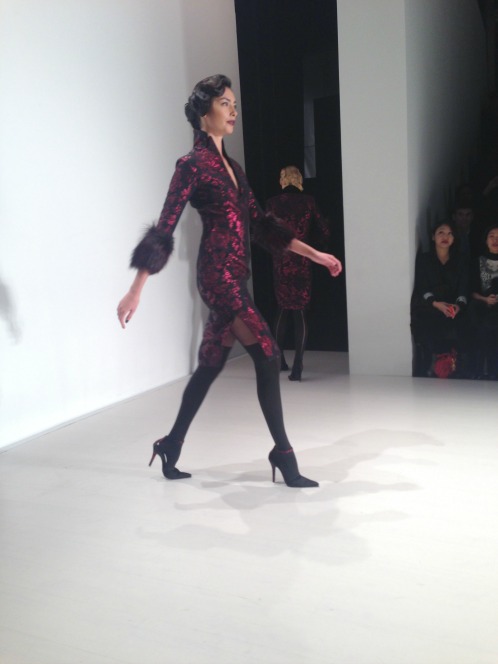 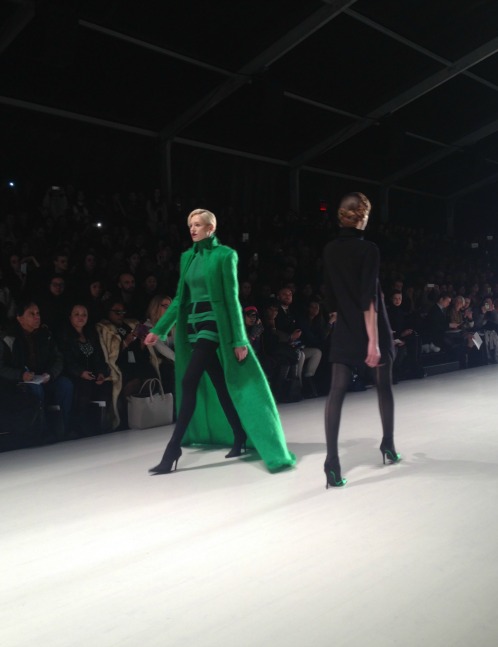 You’ll see from this video of the final walk-through and Zang’s bow that he’s still committed to a diverse runway. He’s been ahead of many other designers in that. (He’s taken the lead in hiring some major supermodels-to-be, too.) You’ll also see that a couple of slinky gowns posed major modeling challenges.  Calling Miss J! Look for a blonde, the fourth in the lineup, with a rueful smile on her face. She is holding her train up, after having quite a lot of trouble getting down the runway her first time out. Another blonde, who is number 11, looked like she might not make it this time. Check her out both heading down and returning, especially when she first comes into the frame on her way back. A saying goes, “There’s no atheists in foxholes,” but there may not be any in the front row of fashion shows either, because, honeys, I was praying for this girl!

The gorgeous woman wearing a jade green wig like it’s no big thing is one of my faves, Georgie Badiel. If you haven’t seen her werq-ing a pale blue gown in 2013, you must look now.

I was true to my word in a December post and wore a newly acquired jacket from Zang’s Spring 2013 Bouquet D’Amour collection.  In that post, I declared I wouldn’t wear it as a minidress with faux-garter tights, as it was shown on the runway. 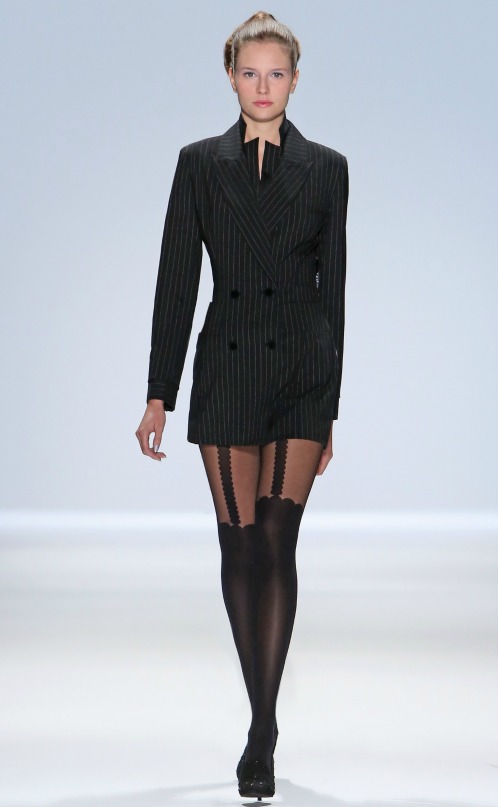 Gorgeous blogger Sheila of Ephemera commented, “You should totally go with the garter belt tights. Screw what anyone thinks! You taught me that, Ms. B.” Sheila was right! What was I thinking? It’s a fashion show, not a board meeting. I can wear whatever the hell I want. I decided I did want garter-belt tights, and I was pleased because Zang used tights with a thigh-high look again in this show. In addition, I wanted blue lipstick. 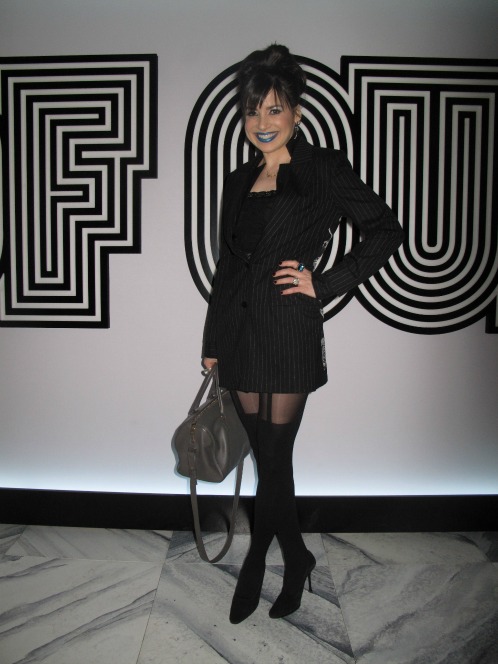 The back of the jacket is what makes it special. 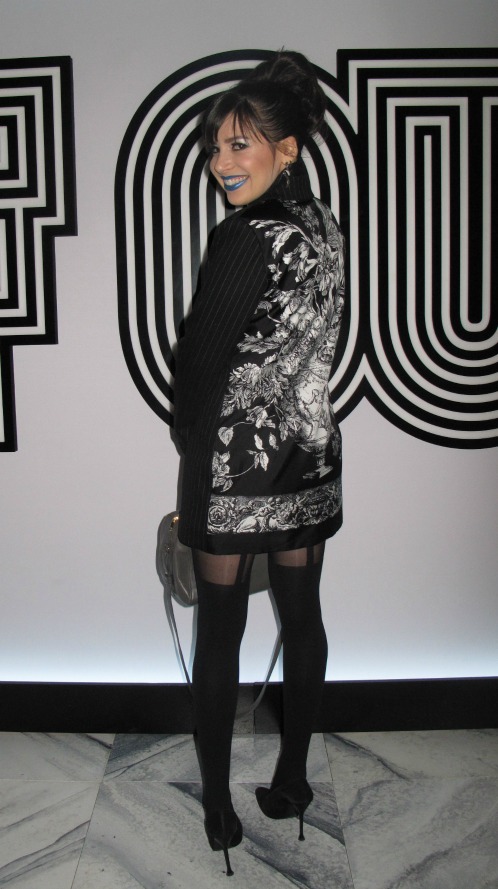 I LOL’d when I realized MrB and I were wearing matching pinstripes. You can hardly tell where one of us ends and the other begins! 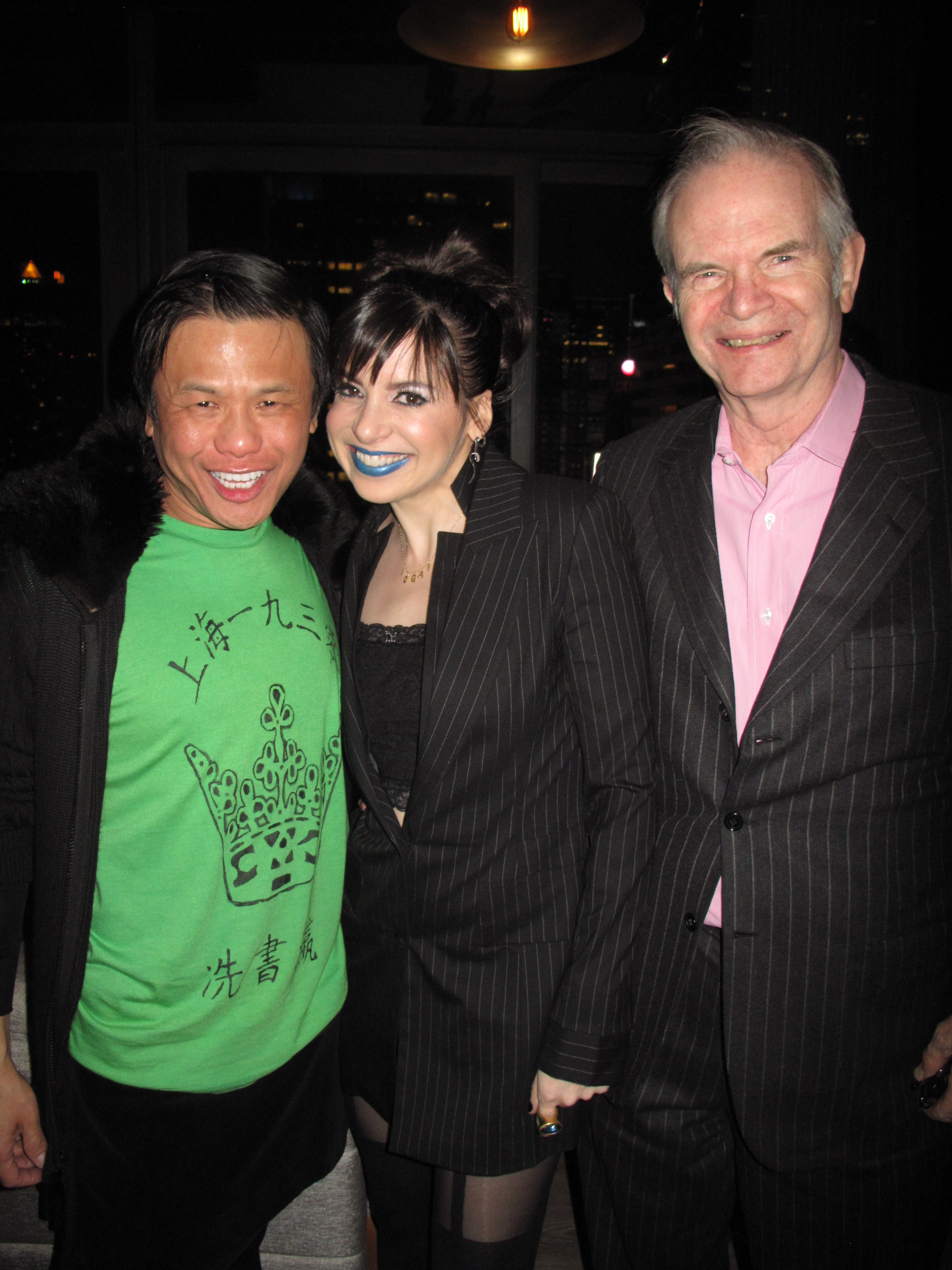 With Zang and MrB at Zang’s after-party.

I am madly in love with my blue Ka-Oir lipstick, especially because it goes so well with my blue-topaz Nuit rings.

Expect to see a lot of that lipstick — not at board meetings, though!