There was no contest. My Best Dressed/Wear What You Want combo award for the Screen Actors Guild awards goes to Kerry Washington. Remember, to get this prestigious award, a beautiful outfit doesn’t suffice. Your look has to be eye-catching — even controversial. Pregnant Kerry scored with a Prada crop top and skirt, because a crop top on a pregnant woman is always going to make some people go “tsk tsk.” And this crop top was on a serious red carpet, not a MTV Video Music Awards “anything goes” deal. But anyone who looks at Kerry and disapproves needs to get his or her eyes examined, because she looks absolutely elegant. 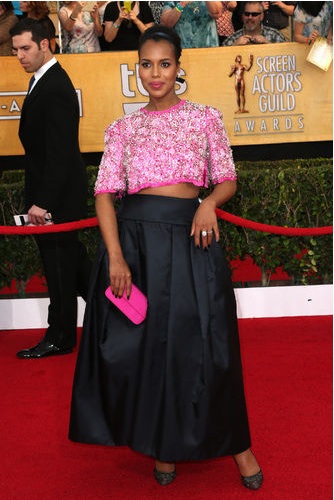 There was some other good fashion at the SAGs — more so than at last week’s Golden Globes.  Lupita Nyong’o looked gorgeous again, this time in a teal Gucci gown. Like the red Ralph Lauren she wore to the Globes, the gown is a perfect fit.  Most improved was Jennifer Lawrence, whose sparking Dior was much better than her puffy, white, meme-spawning Globes gown. The ever-quotable actress startled E!’s viewers by referring to her “armpit vagina” during her red-carpet interview. Oh, Jennifer! Don’t you know the proper term is “armgina”?! But I can’t be mad because when I wrote about the too-tight bodice afflicting Katherine Heigl in 2008 I said:

“I’m sorry, beautiful actress Katherine Heigl! I would never have mentioned this because you are gorgeous from head to toe, including your armpits, but I was worried I would never have another reason to say the word ‘armgina’ if I didn’t take this opportunity.”

Thanks, J-Law, for giving me a reason to say “armgina” again! It’s been way too long!

UPDATED TO ADD: From the Department of Red-Carpet Hairdos: Natalie Dormer looked hawt with her half-shaved head.

You might also like
Pining for Pimm's at Harrods
Your Move, Zendaya. Bring Back That Mullet.
What Wendy Wore: Striped Wedges by -- Uh-Oh!
Previous Post: « Customer of the Day: Laura and Her “Heart You” Earrings
Next Post: The Weeks in Review: January 5 – January 18 »