A strappy, cut-out one-piece bathing suit by Agent Provocateur has been hot for a while. 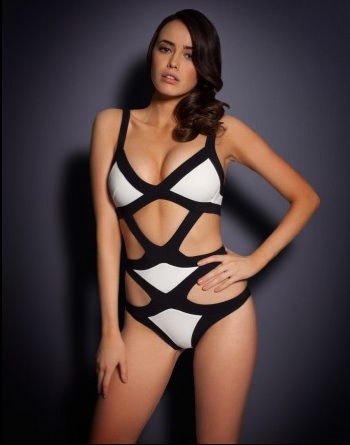 Modern Family actress Sofia Vergara looked great in it! Kim Kardashian has worn the bikini version. That two-piece look was popular enough that another company produced something similar, causing Agent Provocateur to sue. Knowing that, I thought I had fallen into some kind of time warp last week when I came across this 1967 photo by William Claxton of model Peggy Moffitt wearing the one-piece look. Model from the ’60s, suit from 2013?!

After I did a major double take, I read the caption and learned that Peggy’s suit was by the late designer Rudi Gernreich. An earlier image of Peggy in Gernreich’s topless monokini is famous but I wasn’t familiar with the strappy look.  I don’t know how that could be, considering that gorgeous bloggers including Liz of Vintage-a-Peel and Jacqueline of The Hourglass Files pointed out the bathing suit similarities last year (Liz and Jacqueline also posted Gernreich’s bikini). How did I miss this? I feel like I wasn’t paying attention in class. Embarrassing! But, even though it’s old news, I have to add this to my “Fashion Repeats Itself” files, because there has been only one other time (with a Terry de Havilland shoe and a Miu Miu shoe) when I genuinely thought that the vintage design and the modern design were one and the same.  I should point out that, upon further inspection, there are several distinct differences between the two bathing suits (check the neckline and midriff) but the suits still read the same to me. It reminds me of that old joke: “Who are you gonna believe —  me or your own eyes?” Some versions of that line phrase it as “…your lying eyes.” Right now, my brain is telling me, “Come on, those designs are not identical,” but my lying eyes are all like, “OMG SOMEONE HELP PEGGY MOFFITT, SHE’S STUCK IN A TIME WARP!”

UPDATED TO ADD: Even more embarrassment! I DID see Liz’s post last year. I even commented on it! LOL. I guess the Agent Provocateur suit hadn’t yet gotten so popular and wormed itself into its consciousness the way it did later, so it didn’t make as much of an impact on me. Either that, or I’m losing my mind. I prefer the first explanation.