My weekend was full of music. On Saturday, I went to see my friend Kevin Mercado (aka Merx) perform with his band, Electric Black Horse, at Mercury Lounge. It was so dark there that none of my photos came out, so here’s one from a performance last year. 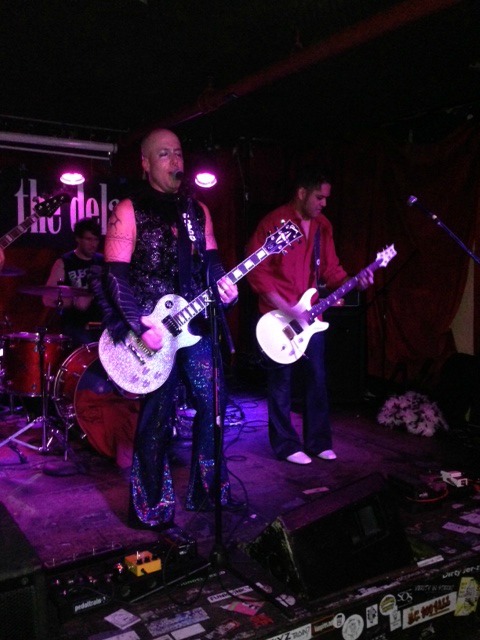 Michael Pate on the left, Merx on the right.

I was dressed casually. If this pre-show photo had a title, it would be, “Is there a cell phone in your pocket or are you just glad to see me?” 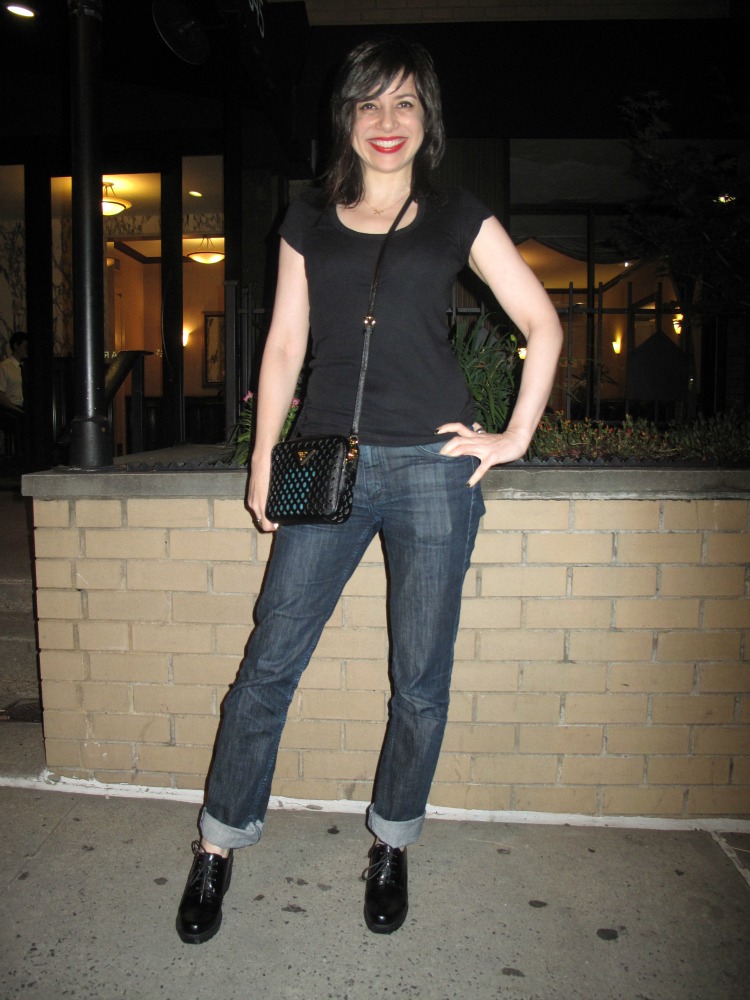 Then, on Sunday, I saw Beyoncé at Barclays Center in Brooklyn. Her queenly video interludes with important-sounding voiceovers about love reminded me of Madonna’s, but King Bey definitely puts on a great show. And my concert-photo-taking skills are really improving. My Eminem, Emeli Sandé, Madonna and Lady Gaga pictures were all terrible. Adam Ant was okay, Rihanna and Skylar Grey were very good and Beyoncé is a little blurry but completely recognizable as Beyoncé. Woot! 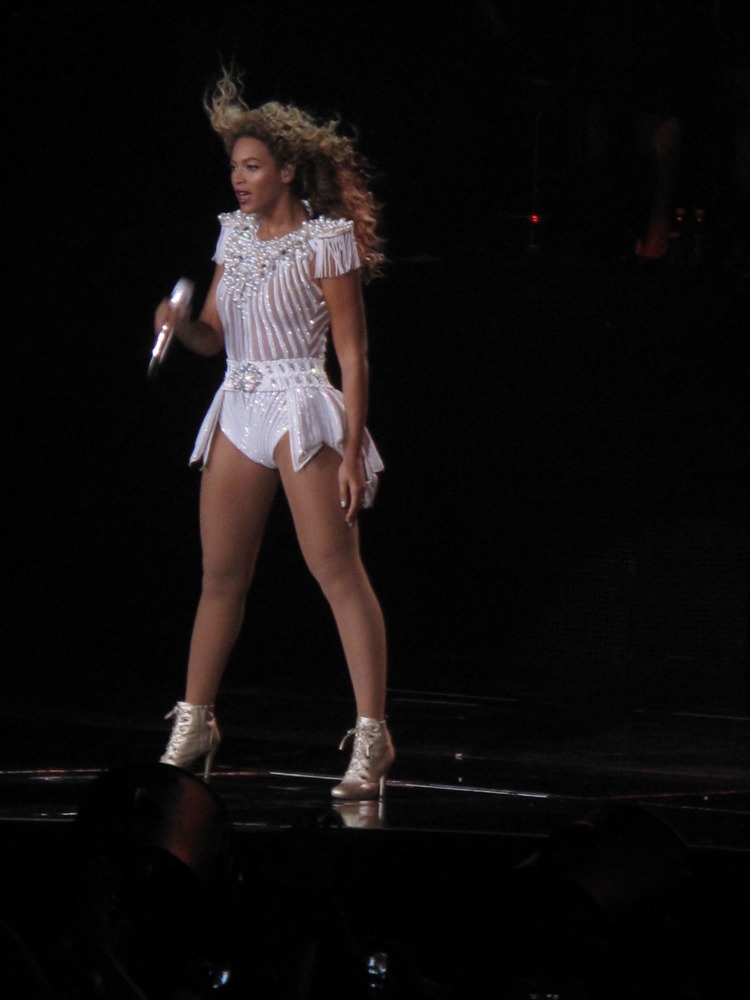 Sadly, I didn’t get a good shot of her flying through the air through a shower of glitter from the main stage to a secondary stage. That stunt didn’t compare to the aerial acrobatics Pink does in concert, but it did remind me that I’ve been wanting to mention an article that the Los Angeles Times ran in March, called, “Pop Divas Are Making a Spectacle of Themselves.” The subtitle was “The music industry’s female stars are quite literally reaching new heights these days as ever-riskier tour stunts seemingly designed for acrobats are built into the show.” It stuck with me because my impression has been that women do all the daring physical things at big arena concerts these days, while men perform with their feet firmly planted on the stage. The Times had the same impression, because its story asked, “But why is it that women are bearing the burden of taking big risks onstage?” I wasn’t entirely satisfied with its answer, “For one, the pop landscape has become more and more competitive.” What does that mean? I’m going to suggest this reason: “Women still have to work twice as hard as men to be successful.” But maybe I’m missing some flying dude performers. If I am, let me know in the comments.

I knew Beyoncé’s costumes were going to be over-the-top, so I figured I’d break out one of my favorite over-the-top pieces: my Junya Watanabe ruffled, cropped, pleather moto jacket. 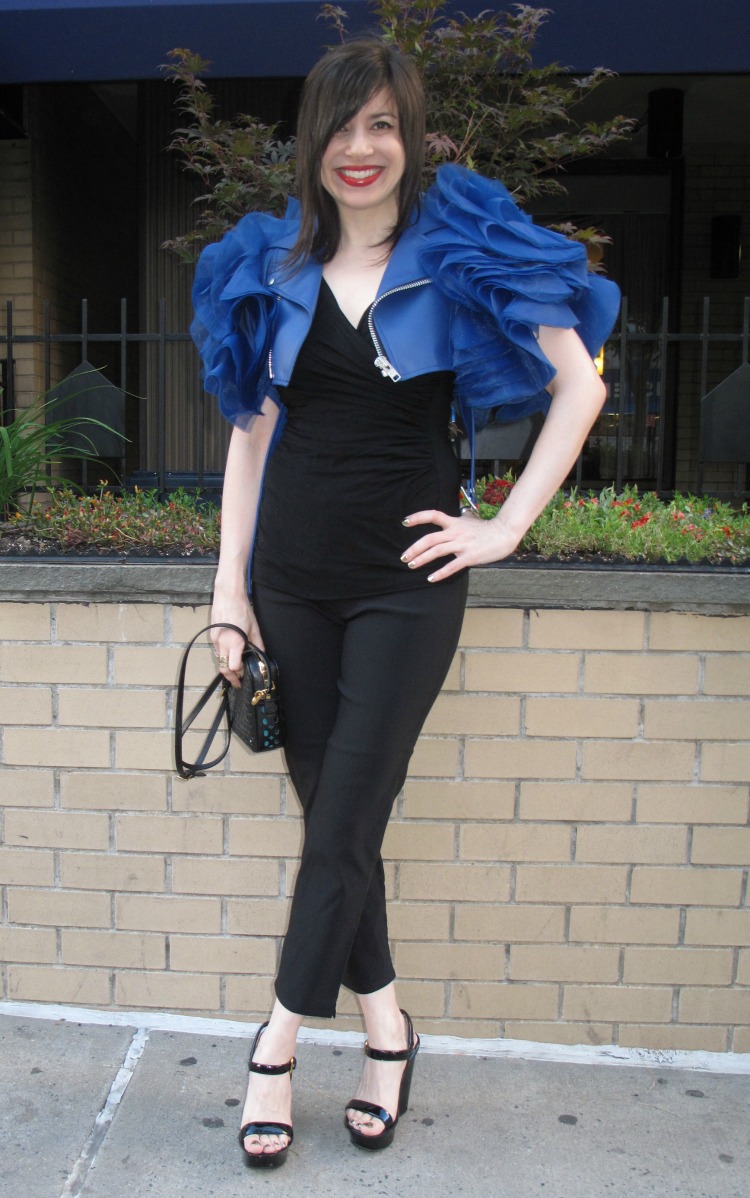 One thing that was really special about the Beyoncé show was the festive mood of the concert-goers. In between the opening act, Luke James, and Beyoncé, party music was being played (including Juicy J’s “Bandz a Make Her Dance,” which I mentioned here). At different times, random women in the audience would dance so enthusiastically that the rest of the arena would turn to watch and cheer. It was highlarious to see everyone on the floor pointing and taking pictures of the dancers in the higher seats. I don’t have any videos of the dancers, so you’ll just have to settle for my clip of Beyoncé doing “Single Ladies.”

I bet if I had looked away from Beyoncé, I would have seen some ladies doing awesome “Single Ladies” hand moves and hair flips in the audience!

UPDATED TO ADD: I’ve linked up to Not Dead Yet Style’s Visible Monday post. Click here to see all the other visible women.