I hear there’s some big sporting event today that involves jewelry, guys in tight pants … and  Madonna. Ha! I’ve always thought that football had homoerotic undertones. Clearly, everyone’s about to come out of the closet en masse, as I first anticipated in October. I’m going to celebrate this happy occasion by offering a serious Valentine’s Day discount on a stunning pink ring — consider it the Wendy Brandes version of a Super Bowl ring. 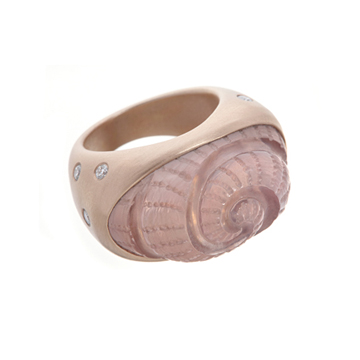 The rose-quartz shell was hand-carved by a German artist. I used a lot of 18K rose gold in the setting, so this size 6 ring has satisfying heft. The shell was such a challenge to set that I vowed never to do anything similar again, so you won’t see this design on anyone else. And if you like diamonds … it’s got those too.

As a bonus, if you buy this ring, I will make it even more super by donating $2,000 to Planned Parenthood for breast-cancer care. Even though Susan G. Komen for the Cure reversed its politically charged decision to cut funding to Planned Parenthood after a public outcry, Komen still irritates the shit out of me. I think it’s a classic example of a group that’s the victim of its own success. It’s not the first organization to face that problem.  After all, when the search-engine company I refer to cautiously as “Poodle” was a little upstart, it’s unofficial motto was “Don’t be evil.” Now that same company is such a monolith that … well … that I know better than to criticize it by name, because it can punish me if it chooses to.

Breast cancer used to be something that women wouldn’t even talk about, out of shame. Now breast-cancer research is massively well-funded (though lung cancer — which even non-smokers get — is the #1 cancer killer of women). Even football players are recruited to the cause in October for National Breast Cancer Awareness Month. In fact, there’s so much awareness — and pinkwashing — that I was very nearly turned off the color pink for life.

I also find Komen’s relentless emphasis on early detection to be too simplistic. I believe early detection will be truly helpful only when it’s combined with an understanding of what variety of breast cancer one has and what the treatment should be. There is early detection for prostate cancer for men too: the PSA blood test. And, as New York Times health reporter Jane Brody recently pointed out, “The development of the PSA test and its widespread use greatly increased diagnosis of this disease, often of cases that would never have become a clinical problem.” She noted, “Prostate cancer is extremely common. The disease can be found in up to 30 percent of men over age 50. Most men who develop it do not die of it; rather, they die with it, often without knowing that it was present.” The best tactic is sometimes “watchful waiting,” rather than surgery that can leave a man incontinent and impotent for no good reason.

There is no “watchful waiting” when it comes to breast cancer, just panic. (Notice how when there’s a penis and a man’s sex life involved, consequences are carefully considered. When it comes to a woman’s breasts, it’s “Don’t be vain! Lop ’em off!”) I’ve known a lot of women who have faced breast cancer. They include young women with the BRCA gene who have had prophylactic double mastectomies; women who have had Stage 0 or Stage 1 cancers and undergone lumpectomies/radiation or lumpectomies/radiation/chemo; and women who have died of breast cancer after a more than a decade of treatment. I am positive that some of the women I know who have been sliced, diced, poisoned, and traumatized may have had cancers that wouldn’t have affected them for 50 years. But if you find something — whether early or late — and have no clue as to how it is going to behave, you can’t take chances. You do the only reasonable thing: you disfigure yourself and consume poison so you can live.

Meanwhile, despite the emphasis on early detection, I’ve met well-educated women who have no idea that mammograms might miss cancers in dense breasts (women under 50 tend to have denser breasts). It’s best to have an ultrasound along with that mammogram, if you’re on the younger side. (If you live in New York City, I recommend Drs. Lichy and Kolb, who do both AND give you the results on the spot.) So my perception of Komen is that even as it directly funds or inspires a lot of good research — including the research that will make early detection more meaningful and that has already uncovered the cancer-causing BRCA gene — its grass-roots message is too focused on an imperfect form of testing that provides imperfect information upon which women are forced to make life-altering decisions. I’m not interested in contributing to that. And if I do get to make a donation to Planned Parenthood thanks to my ring, I will see if I can earmark my money for ultrasounds. If we’re going to be doing early detection, let’s do it the best possible way.