Henry (my Pekingese), Gigi (my Peke-like Tibetan Spaniel) and I were excited that Malachy the Pekingese won Best in Show at the Westminster Kennel Club Dog Show yesterday.

Malachy, courtesy of the Los Angeles Times. Click for source.

We considered celebrating like Lakers fans by setting some cars on fire, but we didn’t have the energy. 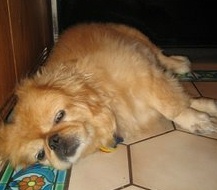 When a Pekingese is in the news — which doesn’t happen as often as it should — the Peke’s position on the list of the 10 least intelligent dog breeds is likely to come up. This list is from a 1994 survey; the intelligence rating was based on how many repetitions it took for a breed to learn a new command. The flaw in this reasoning should be obvious to anyone who has spent a lot of time with Pekes. (My first Peke was Mr. Chubbs; my parents’ Peke was Molly; and my sister’s Peke is named Max.) 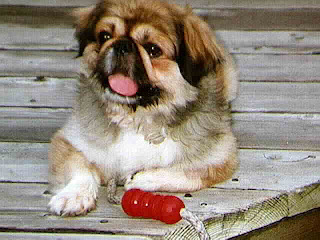 Pekes understand everything you’re saying. But, like the honey badger, they don’t care. 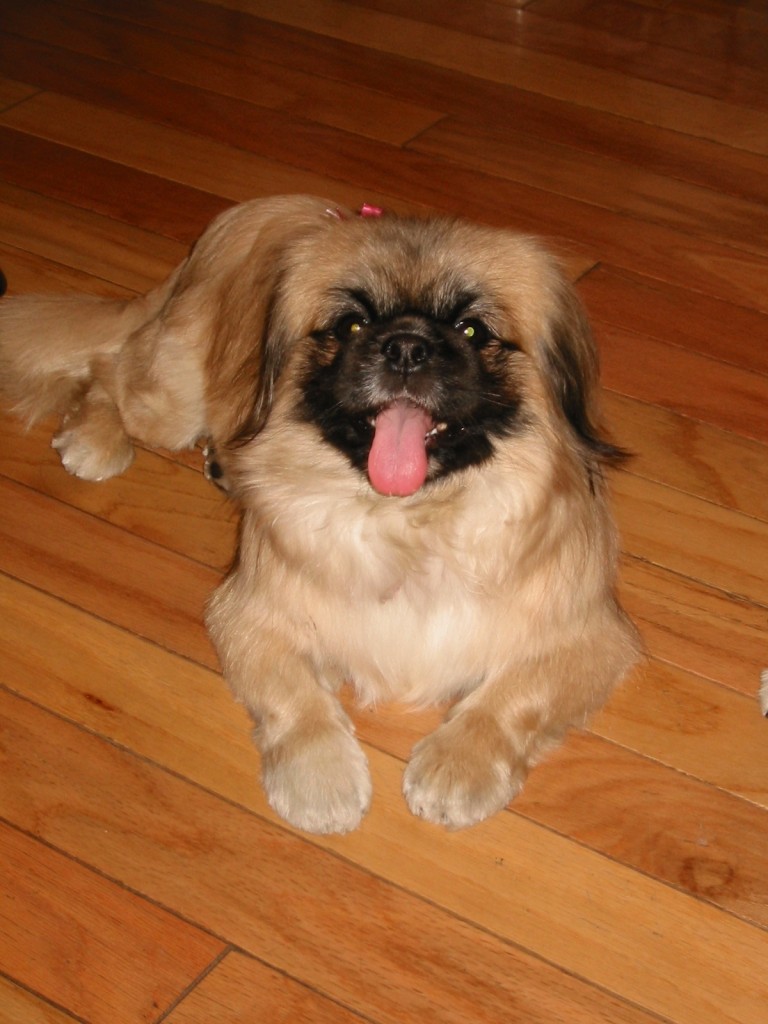 Gigi is an honorary Peke. She has a little less attitude than a real Peke.

When I’m out and about and see someone in the distance walking a furry, low-to-the-ground dog with a strange rolling gait, I think, “That’s probably a Pekingese, but it could be a Lhasa Apso  or Shih Tzu.” If the dog then firmly plants its feet and refuses to move, I have confirmation: it’s a Peke.  Henry — like Mr. Chubbs before him — has a variation on this for anyone who hasn’t walked him previously and is innocent of his ways. He’ll trot along at a good clip for a block. Then he lies down and can’t be budged, to the extreme distress of the human, who carries him home. Sometimes concerned bystanders have volunteered to carry Henry on behalf of the worried friend/relative/dogsitter. I wonder what they think when they set the dog down in the lobby of our apartment building and see him prance off to the elevator without a care in the world. 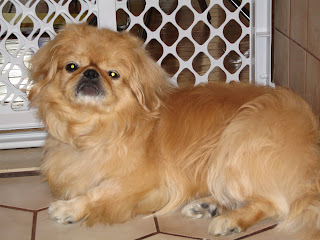 Walking Henry is challenging even for people with experience. Henry was born with a deformed paw. An experimental operation greatly improved but (as expected) didn’t cure his foot problems. Sometimes the paw flares up and he has some pain, but he can always walk just fine. Unless it’s too hot outside. Or too cold. Or the sidewalk is wet. Or he’s done his business and wants to go inside even though Gigi needs some more time. Then he holds his paw up and looks pitiful. Try to imagine the looks I get from people as I’m dragging this little dog with an “injured” foot down the sidewalk. If the animal cops snatch me up, you’ll know why. The thing is, when Henry’s foot REALLY hurts, he keeps it elevated (and happily zooms around on three feet). When he’s faking it, he starts walking normally as soon as we’re going in the direction he wants to go in. 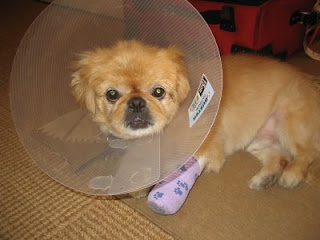 Post-surgery, Henry would walk up to strangers on the street and show them his bandage to get attention.

During the three or four hours each day that Henry isn’t catching up on his beauty sleep or being dragged down the sidewalk, he’s thinking of ingenious ways to hustle or steal food. I still don’t know how he unscrewed the tightly sealed top of a plastic tub containing 15 pounds of dog food. When I found him only his tail was sticking out of the container as he busily ate his way toward the bottom. And when he’s not hatching food-related plots, he’s trying to break into the off-limits guest bedroom, where he sometimes expresses his feelings about it being off-limits by pooping. It’s like living with Triumph, the Insult Comic Dog.

In the six years since I brought Henry home from the ASPCA, I have only taught him to sit and lie down for several seconds at a time. He’s taught me much more complicated things, like understanding from his expression if the water bowl is empty and I must fill it immediately. (There is a different expression he employs when the bowl is full but the water is “old” and needs to be changed.) Gorgeous blogger Jennine did manage to teach Henry to function as an ottoman. But somehow that trick has become corrupted over time, and now he sits on my feet, instead of under them, so I can be uncomfortably hot while watching television. 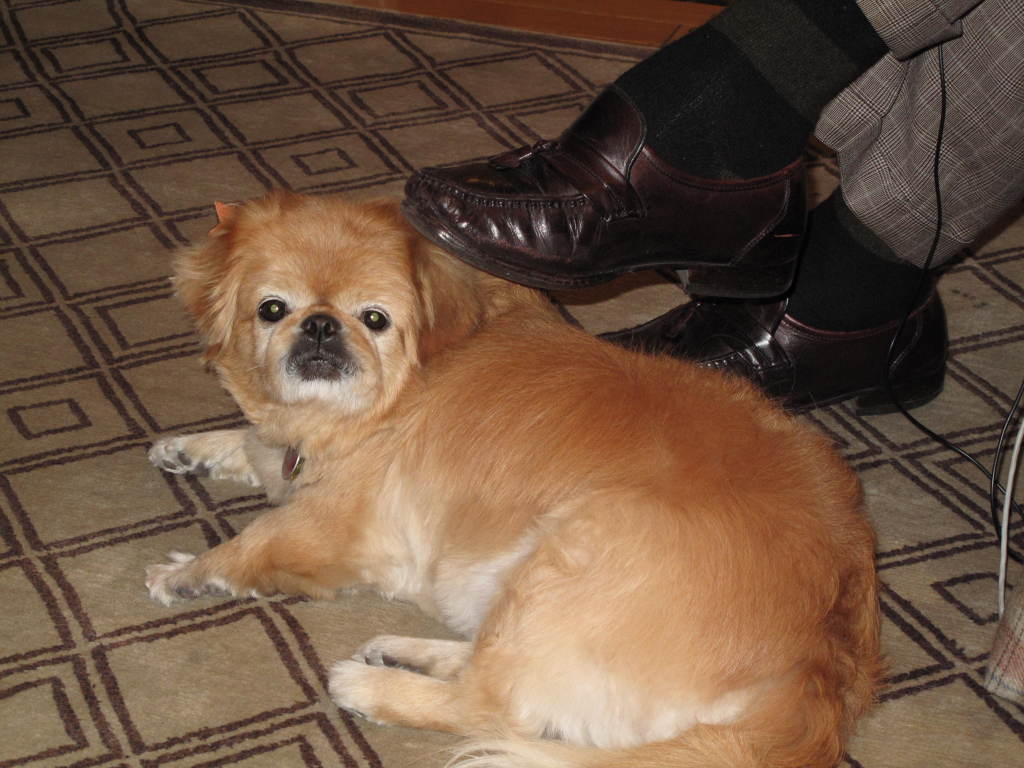 Before Henry realized he should be on top of feet rather than underneath them.

Basically, the Pekes in my life have all been clever dogs who also happen to be “opinionated,” as the American Kennel Club says, or “stubborn assholes,” as I might say on a bad day. The fact that I love them to death should probably be explored in a therapeutic setting!

You might also like
Molly Will Be Missed
Crossing My Fingers for Eminem, Lady Gaga at Grammys
One More G-Shock Photo: Eminem in the Air
« Ladies, Buy Yourself Jewelry for Valentine’s Day
Cleopatra Girls »