In case you’re new to this blog and haven’t read the TEN MILLION posts I’ve done on this topic … guess what?! My Cleopatra earrings are worn by Samantha (Kim Cattrall) in Sex and the City 2! 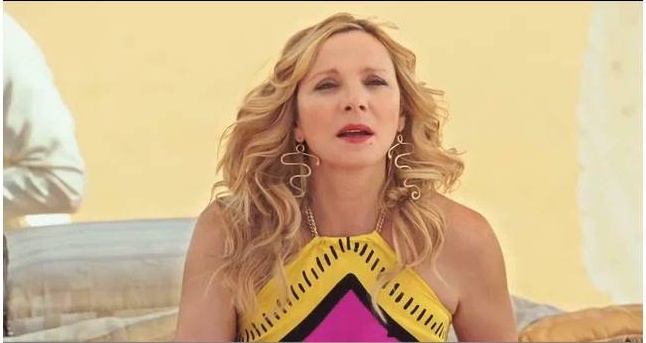 In case you missed her the first 10 million times -- here is Kim Cattrall wearing my earrings in SATC2.

I wanted to see the movie on opening night. At first, I thought MrB and I would have a low-key evening at the movie theater on our block. Then I noticed that the movie would be playing at the nicest theater in New York: the Ziegfeld. Forget low-key! I invited 10 gorgeous friends (plus MrB and my parents, GeorgeB and BarbaraB), brought along Cleopatra jewels for 10 peeps and myself, and turned it into a party.

My look for the evening had to show off the earrings, so I went to super-stylist Julie Matos for a hairdo. She teased up the top of my hair and used my somewhat exhausted faux-ny tail as a fall, letting the hair hang loose instead of putting it into a ponytail. While Julie was working on the top, I was holding the faux-ny tail (we’ve named her “Helen”) and discovered said faux-ny tail had a gray hair.  Julie and I decided that Helen is going gray either from the stress of overwork or from hearing our running conversation about replacing her. 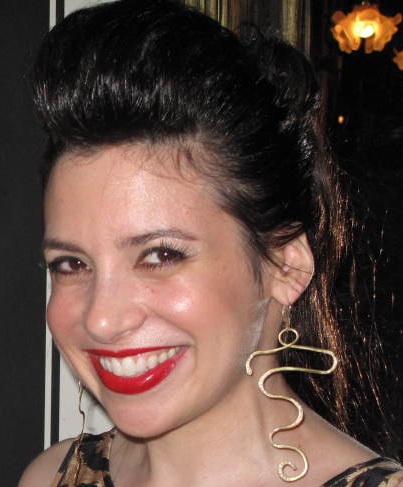 Helen the faux-ny tail plus my Cleopatra earrings.

My lipstick is called Liza, from a discontinued collaboration that Liza Minnelli did with MAC. Perfect for a movie with a Liza Minnelli cameo. Deciding on a dress was a little more challenging. I wear statement necklaces more often than I wear earrings. Earrings aren’t as visible with my usual hairstyle and it’s important that people see my work easily: I’m the walking billboard for my business. While getting dressed for SATC2, I realized how many of my dresses have plunging necklines that cry out for necklaces. Luckily, I have a Diane von Furstenberg from the early 2000s with a higher neck. 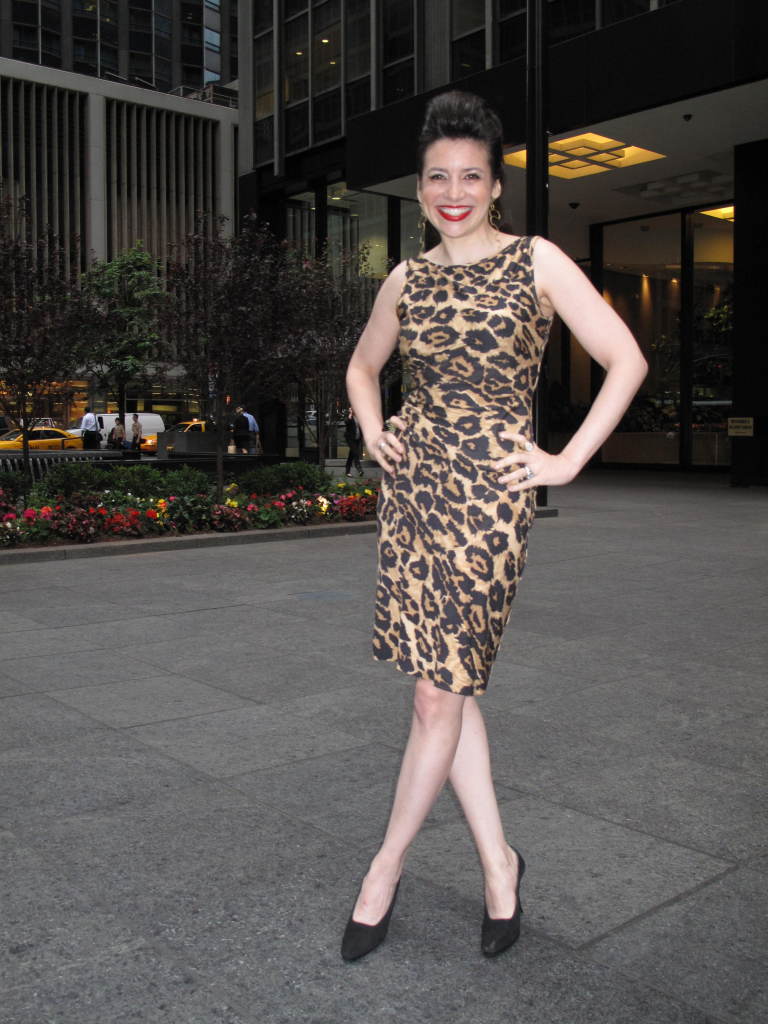 My shoes were involved in some drama early in the evening. Gorgeous blogger Stacy of taffetadarlings happens to be my neighbor, so she came over to share a cab to Benoit, where we were all meeting for pre-movie Prosecco and the jewelry distribution. We were both running late, as usual. Stacy was doing her nails and changing out of her flip-flops in the cab. We’d only gone half a block when I realized I’d left my phone in the charger at home and, that as the evening’s hostess, I’d have to have it in case anyone needed to tell me she was lost or delayed. “Stop the cab!” I screamed at the driver. “Give me your flip-flops,” I screamed at Stacy, concerned about my ability to run in my heels. Flip-flops, nail polish and Stacy herself were hurled around the cab as I crawled over her and dashed home to get the phone.A  By the time I scooted back to the cab with the phone, Stacy had finished her nails and was coping with the fact that she had accidentally mooned a passerby during the kerfuffle. (I did indeed get a text from my gorgeous friend Amanda, who requested the address of our meeting spot.) Anyway, good to know that I think fast about footwear during minor emergencies.

At Benoit, more hilarity ensued when gorgeous blogger Tina of The Occasional Cook — the photography director of a national magazine during the day — organized all the Cleopatra wearers for a picture. After setting us up, Tina had to get in the picture, so she stopped a woman on the street and asked her to do the honors. The woman was accompanied by another woman and two men, one of whom decided to provide running rude commentary including, “One of you is prettier than the other one.” Gorgeous blogger Midtown Girl, standing in back of me, was angered by that comment and said a few things that made Helen grow another gray hair. I kept asking people why the dude sounded like he was addressing two people when he was looking at 11 of us. In the midst of all this … *CLICK!* 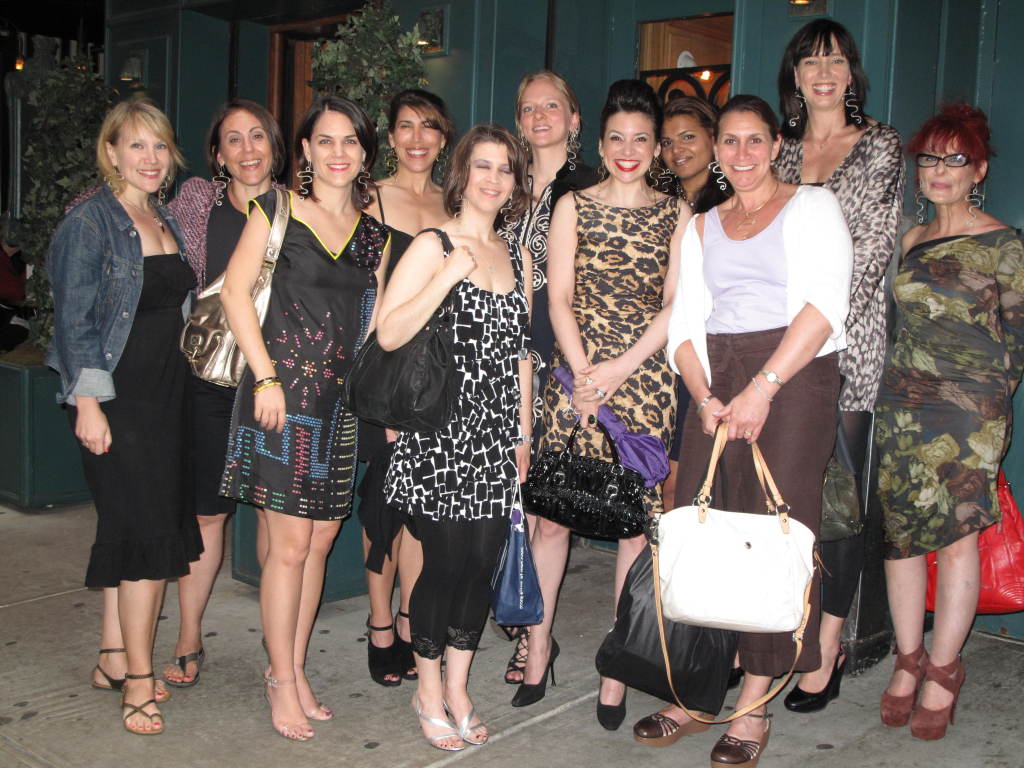 Outside Benoit with my posse.

Somehow, we were able to stop Midtown Girl from killing anyone — though no one was able to clear up my confusion about the singular versus plural issue — and hustle over to meet the B family at the Ziegfeld on the next block.A  On the way, Tina stopped me for outfit pictures … 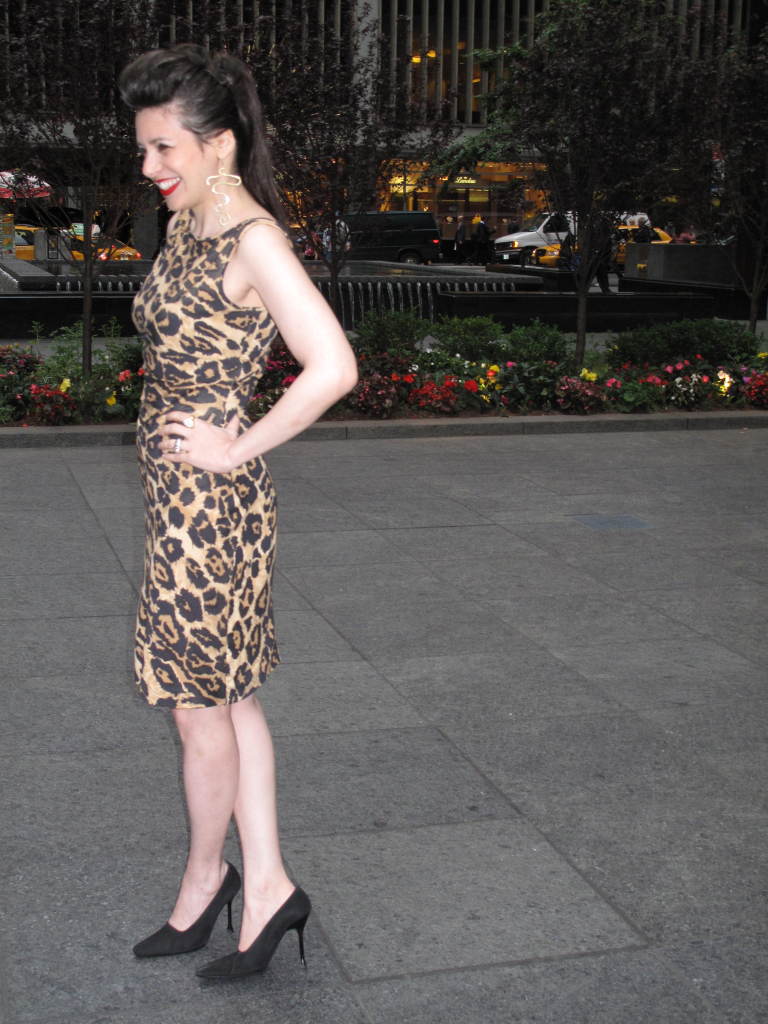 … while everyone else took the opportunity to examine their own cameras. 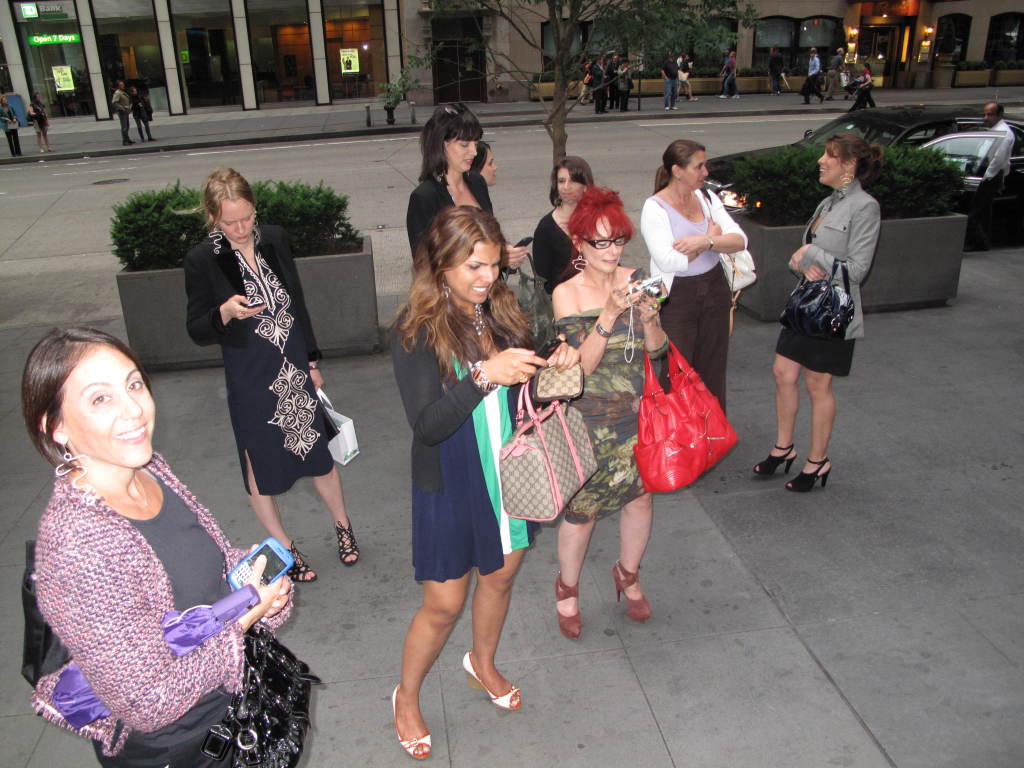 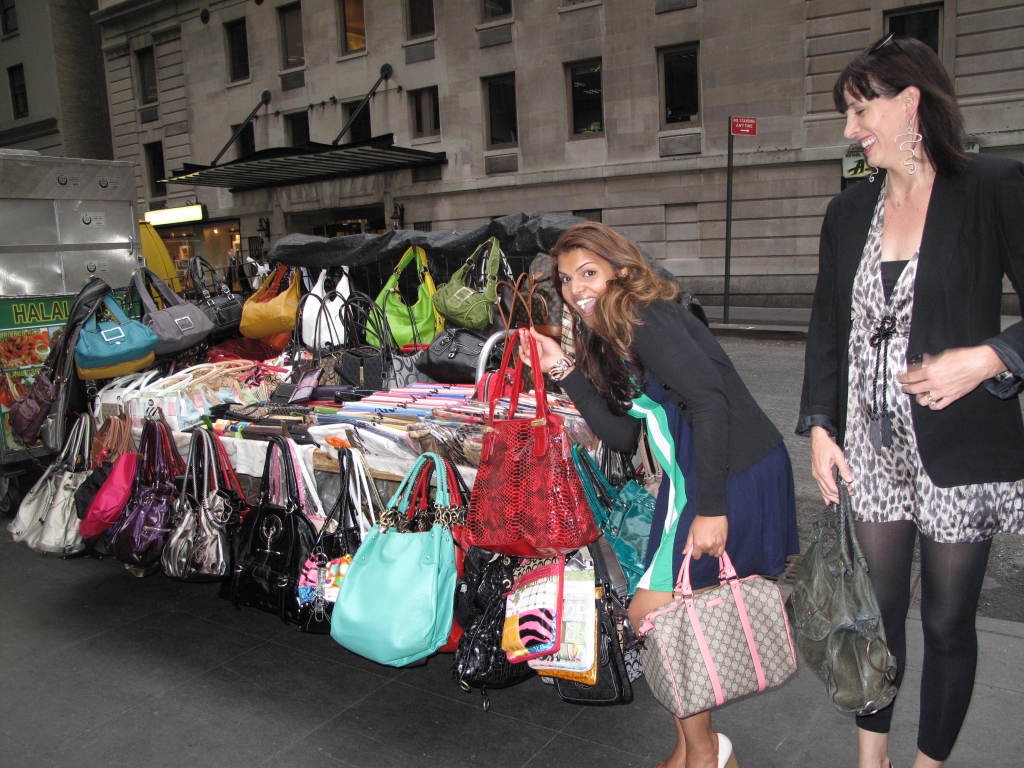 No, she didn't buy one! And the one in her left hand is real.

As for the movie itself? It’s gotten a lot of bad reviews, but my peeps — and the rest of the audience — were screaming with laughter. SATC2 is not going to win any Oscars and anyone who is taking him- or herself very seriously can drone on forever with his or her very legitimate complaints about the characters and plot, but that’s not what this movie is about.  It’s about rounding up your wimmin friends, drinking some bubbly and having some good, silly fun! Here’s my movie marquee blurb:

My praise for Kim Cattrall is not influenced by the fact that I had a fashion mind-meld with her during this movie. Of course, she was wearing THE EARRINGS. Fashion Herald sneaked a picture of them on the big screen. 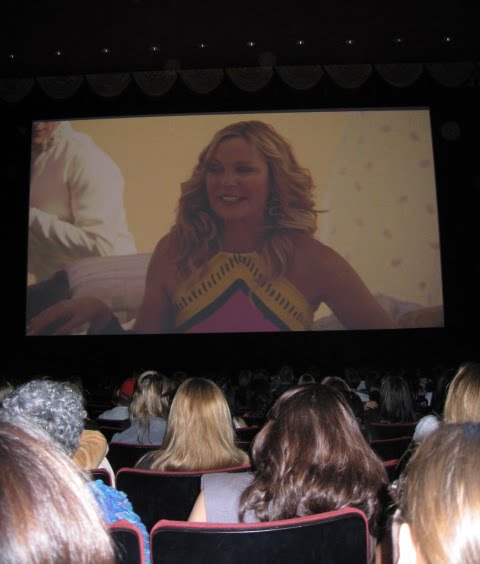 The actual pair of earrings you see in this photo are available at Broken English Jewelry. Click for contact info.

She also had a Minx manicure, another one of my favorite fashion statements. Most amazingly, in one scene she is wearing a one-shoulder tiger-stripe dress which I am convinced is the twin of my vintage Clovis Ruffin tiger-stripe strapless dress — I’m betting it’s also a vintage Clovis or made by another designer from that period with the same fabric. I’m going to try to find out for sure, via stylist Patricia Field.

Privately, I had a good laugh about Carrie’s and Mr. Big’s squabbles about what to do in the evenings. She wanted to go out; he wanted to sit on the couch watching TV. I kept envisioning her dropping by my apartment at 11 p.m. most weekdays, which is when I yell, “FAMILY GUY!” at MrB and we sit on the couch (me in my gym clothes) and watch cartoon reruns. Oh, the glamour of it all!  I’ve seen some of those Family Guy episodes so many times that I say the lines before the characters do, and I’m trying to teach my 18-month-old nephew to say, “Cool Hwip” like Stewie does.

I also got a laugh after the movie when GeorgeB exclaimed: “I sat in a row of gay guys — now I’m booked for the next month!”

One rant: I read quite a few SATC2 reviews that complain about a moment when Muslim women take off their burkas and reveal designer clothes underneath.  “Must get hot,” Roger Ebert snipes, apparently operating under the misguided belief that women are walking around with teeny bikinis under their burkas instead of clothes. (The burka is an outer garment.) It is 100% true that there are seriously wealthy Muslim women who dress to impress other women under their robes and who love designer labels. When people bitch about U.S. consumerism, I have to laugh. Americans are amateurs. It’s the Middle Eastern women who keep real haute couture in business. They’re also crucial to the survival of many ready-to-wear lines.  Here’s a real-life example that I encountered: A Saudi princess bought a $10,000 mink-trimmed cashmere shawl in all 25 available colors. That’s $250,000 on shawls and she hadn’t even started her real shopping. (When she got home, her female relatives admired the shawls so much that she came back the following season and got them all complete sets as gifts.) Any designer with a high-end line and an ounce of sense aspires to hit it big with the Middle-Eastern oil-money ladies. So if you don’t like the movie, that’s fine, but don’t say ignant things about my business while you’re dissing it. Also, don’t complain to me that the SATC2 characters aren’t good role models. I wrote about how fictional females shouldn’t have to be a model minority in my 2008 Sexism and the City post. My 2007 Why Does Buyer’s Guilt Focus on Fashion is a good companion piece.

While you’re catching up on your reading, you definitely need to check out the blog posts by my gorgeous SATC2 party companions:

Finally, I made sure to get a close-up of everyone wearing her Cleopatra jewelry after the movie. Enjoy the slideshow!

You might also like
Pining for Pimm's at Harrods
Wanderlust 2014: I Tuned In to Liverpool
Wendy Brandes Jewelry in National Jeweler
Previous Post: « On the Town: My Sex and the City 2 Peeps
Next Post: Gorgeous Clients Looking Gorgeous »