Gorgeous blogger Tavi of Style Rookie recently posted a link to Washington Post fashion editor Robin Givhan’s column about the uproar du jour over thin models. The column, thankfully, didn’t use the expression “real women” (as in “real women have curves” and, presumably, non-curvy women must be imaginary) but the topic did remind me that I find the expression meaningless and overused. From now on, it is banned. As always, people who use words banned by me by virtue of my authority as Easily Annoyed Person will be Despensered. 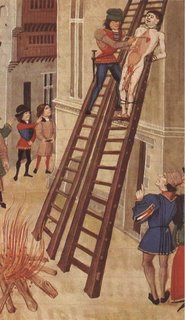 I would also like to ban further manufactured outrage over the craptastic Photoshop work in a Ralph Lauren ad. 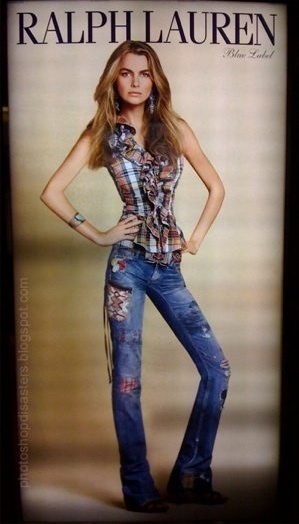 I don’t think the above disaster says anything about our society as a whole. All it says to me is that a couple of people probably lost their jobs for creating and then approving bad art.  Anyone who saw this and thought, “I should look like that” instead of “Wow, someone really fucked up at Ralph Lauren!” is not in his or her right mind anyway, my friends. Such a person would already be crazy in the brain. In my experience, people who are crazy in the brain can turn anything into a problem. As Freud never said, “If it’s not one ad, it’s your mother.” So stop with the wailing and gnashing of teeth already.

Getting back to Robin Givhan, the portion of the column that Tavi highlighted wasn’t specifically about weight:

“It’s always a bit discombobulating when people raise their voices in anger because they’ve gotten wind that designers are making and selling $25,000 dresses. After all, it’s not as if the existence of a dress that costs as much as a car negates the availability of cute $25 frocks at Target. And it isn’t as though edicts have been issued that all women must now dress like one of the superheroes on Balenciaga’s runway.

For personal and sometimes tortured reasons — I can’t have it so no one else can! — observers declare that they just don’t understand the attraction of these strange and expensive clothes. That would be a fair argument if those same complainers lashed out at people who spend thousands of dollars on Redskins season tickets, vintage wines, first-edition books or midlife-crisis cars. But those industries don’t stir nearly as much ire from people who are uninterested in them.

Everyone has a passion that is lost on others.”

I was delighted by these words because they reminded me of my own 2007 post, “Why Does Buyer’s Guilt Focus on Fashion?” And, since I didn’t have a post prepared for today, I thought, “Hey, I could just repeat my post from 2007.”