Last week, I went to see “Whole in the Wall,” an exhibit of graffiti art at the Helenbeck Gallery, accompanied by my designing friend, Christian Francis Roth, and my gorgeous, non-designer friend, Maggie Kneip. I wrote more about the show on my brand-new Francis blog today. [UPDATED TO ADD: That blog is now defunct.] As a bonus, you can also check out my new dress (from Christian’s Francis line), new shoes (Manolos, just like Princess Poochie’s) and new hair (courtesy of Keith Carpenter).

While I was at the gallery, I took a picture of this sign by the elevator. I was amused by the warning at the bottom. 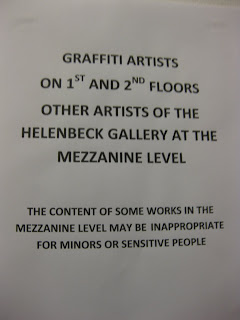 I thought of the sign while reading a story about Disney’s The Princess and the Frog movie in the New York Times Sunday Styles section a few days after the show. I think photographer Bill Cunningham is the only reason I even bother with that section anymore. The rest of the pages are exploding with craziness. (For previous instances of Sunday Styles insanity, click here and here.) The Princess and the Frog doesn’t come out till the end of the year, and it is Disney’s first movie with a black princess. Woot! But the article was about how some people are claiming the movie is racist sight unseen, based on photos of Disney merchandise taken from a toy industry event and a one-minute trailer. Shit like this is why I have an issue with people. Really, how can you form an opinion — and worse, share it — based on practically nothing? The Times points out that, “Few people outside the company have seen footage of the movie.” Among those who have? Members of the NAACP … and Oprah. OPRAH, bitches! In Oprah we trust. That’s what it should say on U.S. currency. (Neither the NAACP nor Oprah commented for the Times story but Oprah voices the princess’s mother, so I’m going to go out on a limb and suggest that she’s cool with things.) 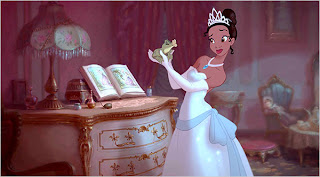 Princess Tiana from The Princess and the Frog
Photo from Walt Disney Pictures, via the New York Times

My favorite part of the story — and by “favorite,” I mean the part that made me most want to slap a fool — was a quote from former Charlotte Observer columnist William Blackburn, who last year told a U.K. paper, “Disney should be ashamed … this princess story is set in New Orleans, the setting of one of the most devastating tragedies to beset a black community.” WTF, Bill! The movie is set in the ’20s against the Big Easy’s blazing jazz scene. I don’t understand why we should erase memories of the cultural importance of New Orleans because of Hurricane Katrina. It’s the other way around! We should revel in its history. (Here’s the original, full quote from Bill B. What does he have against alligators? Gator hater! As my gorgeous stepdaughter points out, “The Little Mermaid had a flounder and a crab … Disney always takes random shit and makes it talk.”)

I was relieved that the last paragraph of the Times story was a quote from a voice of reason. Floyd Norman, who is African-American and a former Disney animator, wrote this in a 2007 essay Jim Hill Media: “Overly sensitive people see racial or ethnic slights in every image. And in their zeal to sanitize and pasteurize everything, they’ve taken all the fun out of cartoon making.” You tell them, Floyd!

I’m not even going to get into the other foolio story on celebrity weight in Sunday Styles that day, except to state that if Kirstie Alley wants to say that she feels unhappy about weighing 228 pounds, she should not have to censor herself for fear that a random 228-pound lady whom Kirstie doesn’t even know will then feel bad about her weight. Jebus, people! The world doesn’t revolve around you. It revolves around Oprah! Deal with it.

Whole in the Wall runs through June 27 in NYC. Click here for more info.
The Princess and the Frog opens in New York and Los Angeles on November 25, and in theaters everywhere on December 11.
…And don’t forget to check out MY NEW BLOG!
You might also like
Beyonce Wins the 2012 Met Gala
Share Your Best Search Terms
Nancy Pelosi, the Blue Wave, and Indivisible
Previous Post: « Francis + WendyB = Fun*
Next Post: Where’s the Beef? »