When my former dream client, actress Helen Mirren, said some shizz about date rape to GQ earlier this year, I didn’t say anything because I never read the original article (of course, neither did the majority of the people who were crapping their pants about it). From what I read about the article, it seemed to me that, in the quote that made everyone crazy, Mirren was not saying that date rape shouldn’t be illegal, but rather that certain he-said-she-said situations are extremely hard to prove in court. Which is true, even when the evidence seems obvious. I decided that even if my interpretation was too kind, I would overlook this mess because it was probably just Helen’s cocaine-brain talking. Just say no, kids. 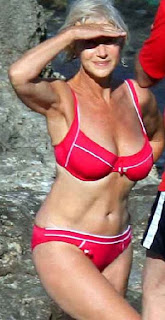 I think my drug theory was the right one, because Dame Helen apparently cooked up her own meth (because she gave up the coke) and sat down with Chrissy Iley (a writer who once gifted Johnny Depp with a dildo) for an interview with the Times of London. During this interview, either Helen or Helen’s meth goes from saying “she loves women ‘in general more than men'” to arguing that most women are competitive haters who wouldn’t believe another woman’s rape testimony. “The only reason I can think of is that they’re sexually jealous,” Mirren muses, while getting confused about the legal process.

Well, then! First of all, I’m sick of women crying about how women are always so hateful to other women. As I’ve said before, that has not been my experience at all. I have, however, found that women who assume (no, wait, they “know“) that other females are all jellus h8ers tend to be so hostile to the sisterhood that they create a self-fulfilling prophecy. Secondly, even if women are as competitive as all that — so fucking what? Humans are competitive by nature. Men are and it’s not even remarked upon. Why do grrrls have to be saints? Double standard! (And please, hate-accusing ladies, don’t try to convince me that the male of the species is operating on a higher plane just because you’ve manipulated a few dudes into niceness with your feminine wiles. A dose of sex-ay will make a lot of straight men briefly condescend to see your point of view.) This reminds me of how Empress Wu got a bad rap for killing a few annoying relatives now and then, but no one batted an ancient eyelash whenever male rulers decided to give the family tree a thorough pruning.

Weirdly enough, the dumb dame didn’t irritate me as much as the writer, Chrissy Iley, who reacts to one of Helen’s jokier servings of haterade with, “But she’s right. On the whole, women don’t like other women, because women are competitive with each other.” Speak for yourself, lady! You haven’t taken a damn survey! In fact, you haven’t even done your laundry. Seriously. The article ends with this: “As I get up to go, she [Mirren] stops me and says, ‘And thank you for the view.’ I blush. I was jet-lagged, I had no clean underwear, so I’d gone without. I didn’t think she’d notice. But she did. And she laughs, the minx. ” WTF? Chrissy is flashing her chimichanga region to a woman who is potentially confused about date rape? She’s asking for it! I mean it. She wants Dame Helen to ravish her with Johnny Depp’s gift-wrapped dildo! Bow-chicka-bow-wow!