Eric Idle, the author of the Monty Python musical Spamalot, recently changed the show’s lyrics to take out a reference to Britney Spears. “Because we don’t laugh at sad people,” he explained.

Now, for accuracy’s sake, he might want to change the lines about the joys of musical theater sung by Spamalot’s timid Sir Robin: “You can sing/You can dance/And you wonâ€™t soil your pants.” Au contraire, mon frere! Musicals can be scary, as I discovered at a performance of Gypsy on Monday. While I had expected Broadway diva Patti LuPone to bring the house down, I didn’t think she’d do it so literally. Towards the end of the second act, a big vent fell off the theater ceiling and hit a woman in the balcony. A loud clatter was followed by a shriek, violent sobs and a man’s shout of “Are you alright?!” 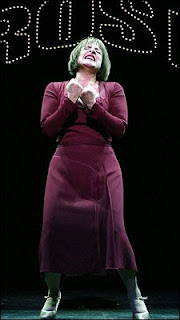 Patti braces herself for impact

But, as theater people say, “The show must go on” and it did, though I really couldn’t appreciate Patti’s grand finale while anxiously scanning the balcony for more casualties. (Luckily, the woman hit by the vent seems to be okay, but I have no doubt she’s consulting with lawyers even as I type.)

Gypsy is based on the book of the same name, a memoir written by Gypsy Rose Lee, the original queen of burlesque. Gypsy became famous in the 1930s for her elegant stripping and on- and off-stage witticisms. (When she was arrested for public indecency after one show, she supposedly said, “I wasn’t naked, I was completely covered by a blue spotlight.”) You can check out her style in this PG-rated version of her strip that she did for the 1943 movie Stage Door Canteen.

The musical version of Gypsy focuses on Gypsy’s notorious stage mother, Rose. (People tend to call the character Mama Rose even though the play refers to her as Mama, Rose or Madame Rose.) Mama Rose yearned for vaudeville stardom and tried to live out her dream through her younger daughter, June. Her older daughter, Rose Louise, was considered less talented and did background in “Baby June’s” acts. The girls never went to school; they just worked. (Britney Spears would be able to relate to this story.) When June was in her teens, she eloped with a dancer from the act and ran away from Mama Rose. Rose turned her attention to Rose Louise. But vaudeville was a dying industry, unable to compete with talking movies. Only burlesque was thriving, so Rose pushed her daughter into stripping. Rose Louise became Gypsy Rose Lee and a star was born.

The on-stage Rose is a selfish, overbearing horror. The epitome of the crazy stage parent, she’s Lynne Spears plus Dina Lohan plus every scary pageant mom wrapped into one soul-destroying package. The only thing worse than the on-stage Mama Rose? Real-life Mama Rose. 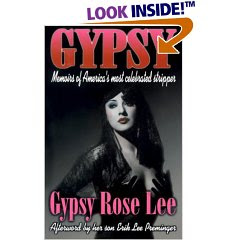 Both Gypsy and her sister, who became the actress June Havoc, communicated with Rose through lawyers in later years, generally about Rose’s demands for money. Gypsy didn’t even write her book till after her mother’s death, because she knew Mama would sue her ass. Rose eventually opened a lesbian boardinghouse in New York City. Apparently being a good hostess was not her forte, since she shot and killed one of the guests. According to Gypsy’s son Erik Preminger, the victim was Rose’s lover who’d had the bad judgment to make a move on Gypsy. The death was declared a suicide and Rose was never charged.

In the play, Mama Rose, her boyfriend/agent and the pre-Gypsy Louise sing an upbeat song called, “Together, Wherever We Go.” The lyrics include, “Wherever we go, whatever we do/we’re gonna go through it together./We may not go far, but sure as a star,/wherever we are, it’s together.” In reality, as Mama Rose lay dying of colon cancer, her last words to Gypsy were, “Wherever you go, whatever you do, I’ll be right there. When you get your own private kick in the ass, just remember: it’s a present from me!”

When Gypsy was dying at the age of 59 from lung cancer, she told June, “This is my present, you know. My present from Mother.” Terrifying! Believe it or not, June is still alive in her 90s. 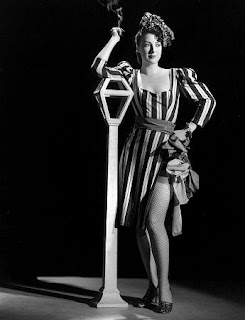 Here are my reading/listening/watching recommendations for Gypsy Rose Lee.

And one of the show-stopping songs in Gypsy is You Gotta Have a Gimmick, in which three washed-up strippers teach an innocent Louise the basics of burlesque: “To have no talent is not enough!”

Finally, here are some newspaper articles (registration may be required):

Well, that should keep you busy for a while. And of course, if you’re in New York, go see Patti in the play! Remember to bring a hard hat, just in case.

You might also like
Fashion Repeats Itself: Trashy Couture
What Wendy Wore: In Stitches After Frankenweenie
Throwback Thursday: Tiffeau Dress Through the Years
Previous Post: « Out to Dinner Outfit
Next Post: Ossie Clark Goes to Dinner »