If you weren’t sentient in the ’80s, you missed some interesting fashion. You also missed the moment when wealthy musicians from the U.S. and U.K. first started tormenting innocent African people with insipid charity songs. It’s bad enough to be starving. It’s worse to be starving while some craptastic song generates large amounts of money that will never help anyone because the corrupt government that caused the famine in the first place is diverting all the donations to drugs, guns and Swiss bank accounts.

The question is which is the more awful charity song: We Are the World (U.S.) or Do They Know It’s Christmas (U.K.)? Don’t answer that! It was a trick question. Obviously Do They Know It’s Christmas is worse thanks to Bono bellowing, “Tonight thank God it’s them instead of you!” Though I’m kind of feeling him right now because when I consider the many things that I regret, I am happy that at least I didn’t sing that line in a charity song. So tonight thank God it’s Bono instead of me!

For ’80s old-timers like myself, the video is the hotness. I love seeing the Durans, Sting and George Michael looking so purty!

The whole reason I brought this up is that I was singing “We are the world” to myself after being tagged by This Lady of Kuwait and Diana Bobar of Romania. I keep trying to retire from the tag business, but how can I resist such wonderful wimmins who have tagged me from so very far away? Especially since This Lady has come up a shockingly long list of questions that no sane person would ever want to answer! So I will answer This Lady today, and I will answer Diana tomorrow, and I will beat the ass of any bitch who tries to hit me with a 100-item tag.

Do your closest friends have any nicknames for you? None they’ve ever been stupid enough to share with me.
What would your ex-(boyfriend/girlfriend/spouse) say about you in one sentence? This isn’t a hypothetical for me. In real life, an ex said to my now-husband, “She’s delightful.” Ah, the polite lie. You can never go wrong with one of those.
What is the greatest achievement of your life so far? Well, I found an eyeliner that I really like. What?! Don’t judge. It took a long time to find that. MAC Fluidline.
How should people think of sex in this, the 21st century? When I think of sex, I think of Paris Hilton in nightvision. Doesn’t everyone?
Where would you live if anywhere was possible? New York City is the capital of the world, baby, and I’m already here.

Is there a sex toy that you would endorse? Back in the day, magazines devoted to Duran Duran used to do quite a lot for me. 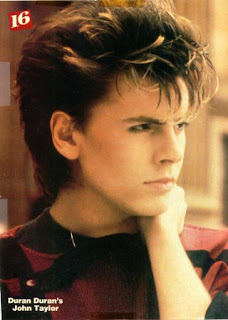 John Taylor, I still wuv you!!!!
Is there a religion that’s fulfilling for you and/or the masses? No.
What inspires awe in your life’s experience? Eh? What are you asking me? I’ll just say “a beautiful sunset.” That seems to work for most questions about life.
What was/is your best pick-up line? “Hey sailor, buy me a drink!”
What and when is the most potent emotion you’ve ever experienced and why? Sadly, I’ve only experienced impotent emotions. They say it’s not me, it’s them, but I still feel so rejected.
On what occasions do you act self-absorbed or just plain selfish? Jesus! I said I would answer the tag…not work on it for years.
If someone assigned you a quest, or if you decided your own, what would you be looking to find? The Meaning of Life. I’m pretty sure it’s in my local video rental place.
If you had to choose between them, would you live in Hollywood, Washington D.C. or New York, and why? I think I’ve made that clear! But maybe someday I’ll get some fake boobs and lips and move out west.
Who or what makes you feel “whole”? Non-skim milk.
Where is your greatest opportunity for change? Under the couch cushions.
What do you consider to be the greatest opportunity for humankind? To create peace on earth through international fashion blogger outreach programs.
What surprises you about getting older? Every day an exciting new wrinkle!
What or who makes you feel younger or rejuvenated? My emotional immaturity.
Where or when do you feel most alone? When I’m sober.
Where or how is society most ripe for change? When a famous gunslinger rides into town. Shane! Come back, Shane!
Do you think of yourself as attractive to the opposite sex? Are you kidding? To the opposite sex, the same sex and sexes that haven’t even been invented yet. 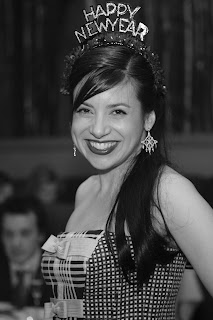 And I’m even more lovable in color!

When or where do you feel the most free? You know, I’ve been trying to think of my “happy place” recently, and I’m not sure where it is. Any ideas are welcome.

What is the greatest memory of your life to date? Can’t say here! My mother might read it.
Where and when did you find out who you really are? Still searching.
How and when do you collect your thoughts and why? Often while writing this blog.
If someone told you when and where you would die, what would you do immediately after being told? I think crying would be #1 on my list.
What are the best parts of being in love? Believing it’s perfectly acceptable to commit the kind of PDA that frightens children and livestock.
What’s your favorite libation (a drink offered to a god)? Champagne. And people offer it to me all the time. Put two and two together, bitches.
What “life philosophies” have you adopted since you’ve become an adult? “This will probably all work out okay in the end.”
How would you like to be remembered? As the sporadically amusing owner of an uncountable number of black t-shirts. I’m pretty sure I will achieve this.

Now I get to inflict this on other peeps. As usual, if I tag you, you don’t have to do it, but I like to take the opportunity to promote other blogs. To continue the We Are the World theme, I am tagging Andrea of Martirio’s Way (Chile) and Only Shallow (Finland). I’m too exhausted by This Lady’s assignment to pick any more.