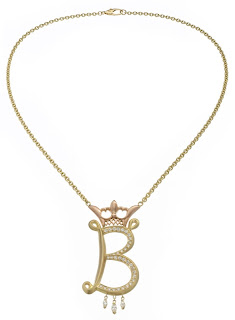 I’m continuing last week’s post on Anne Boleyn, the second wife of Henry VIII of England, or “Henry teh 8” as I will now call him thanks to whoever hit my blog with that search term. In case you’ve forgotten (or never known), Anne is the first “beheaded” in the mnemonic for Henry’s six wives: “Divorced, beheaded, died. Divorced, beheaded, survived.”

One of the comments on my last post reminded me I didn’t tell my most personal Anne Boleyn story … the story that thanks to 20/20 hindsight predicts my career as a jewelry designer/royal biography reader! When I was eight or nine years old, my parents went to London and came back with books for me. I was fascinated by the spooky-looking old paintings, especially one of a dark-haired lady with a “B” necklace. It always stayed in my mind that someday I’d make a “B for Brandes” necklace for myself. And lo and behold it finally happened! So, you see, I have a connection with Anne from way back in the day.

Speaking of that moment, which seems like it was from another lifetime, my favorite fictional Anne Boleyn book is all about other lifetimes. Threads by Nell Gavin is narrated by the disembodied spirit form of Anne, who reviews her lives with Henry. Yes, multiple lives, because in this book, their courtship and marriage in the 1500s was only one of several lifetimes spent together. You don’t have to believe in reincarnation or know much about Anne to enjoy this book. Normally, I would find the reincarnation theme to be a bit hokey, but it really worked for me here, primarily because it is not about some kind of perfect love throughout the centuries. Quite the opposite. It seems like Anne and Henry are going to keep finding each until they learn to be better people. It’s very royal-history-meets-Hinduism and it works. I guarantee you will have tears in your eyes at the end.

I have many more Anne books to cover, but I’m very grumpy today and I don’t want to take it out on Anne. She’s suffered enough. I’ll finish the Anne books next week and then we can move on to Jane Seymour, the queen who died a natural death.

You might also like
Piping Hot Jewelry, Fresh From the Oven
Essence Magazine: You Need It!
Word to the Wise
Previous Post: « Amusing Gift Ideas From Noted Co.
Next Post: The Footwear Creeps in on Little Mouse Feet »