I’ve been doing a lot of thinking about tiaras lately, so I loved seeing a major ruby headpiece, designed by Irene Neuwirth, on Best Actress nominee Ruth Negga at the Oscars.

Some people say that red doesn’t stand out on a red carpet, but Ruth killed it with not just the tiara, but also ruby earrings, red lipstick, and a red Valentino gown. The gown was a very different choice too, with its high neck and long sleeves.

The only thing that broke up Negga’s all-red-everything look was the blue ribbon she wore to support the ACLU.

Ruth is the runner-up for my Best Dressed/Wear What You Want award. The top prize goes to another tiara-wearer, Janelle Monáe, who has been wowing me with her hair and dress style while promoting her movie, Hidden Figures, and throughout the awards season. In December, while she was doing promo for the film, she wore googly eyes in her hair. At the Golden Globes, she wore a mullet dress — and you know how I love mullets — by Armani Privé. It’s tough to top those, but Janelle did, looking regal in a jeweled Jennifer Behr headband and am Elie Saab Haute Couture gown that Elizabeth I might have coveted. (The sheer top wouldn’t have discouraged Liz. She liked showing off her bosoms!)

Because Janelle Monáe is in two Oscar-nominated films this year (in addition to Hidden Figures, she played a major role in Moonlight), a few of you might have forgotten that she is also a singer. I saw her in 2010. 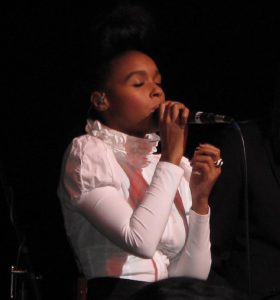 If you’d told me then she’d be getting even more beautiful and talented, I would have asked “How?” because I figured she was already perfect! I’m looking forward to what she does next.

You might also like
Why Ke$ha Does Penis-Shaped Jewelry and I Don't
The Perfect Top for a Monday Morning, Plus a Tupac Ring
The Mother of Dragons Is a Real-Life Badass
Previous Post: « What Wendy Tried: Oscar de la Renta on Oscar Weekend
Next Post: What Wendy Wore: Vintage to Vanity Fair »