From the media coverage, you might think that everyone who goes to the Coachella music festival in Indio, Calif., cares more about fashion than music. (Vanessa Friedman of the New York Times — praising the way clothes serve the message in Beyonce’s new visual album Lemonade — writes, “It is the anti-Coachella: the opposite of a musical event leeched of meaning by branded commercial enterprises.”) But I can assure you that plenty of people besides me and my concert-going friend Jessie were there for the music. Not parties. Not ribbon chokers and face paint. The music!

The first Coachella weekend — our weekend — was April 15 to April 17. On Friday, my favorite acts were two singers I’d seen before. I’d liked the music of Christine and the Queens (the stage name of French performer Héloïse Letissier)  when I saw her open for Marina and the Diamonds in New York last November, but I was situated very far away from the stage that night. Seeing her from the front row at Coachella made me love her.  I didn’t get to appreciate her Michael Jackson-like dance moves and theatricality before. 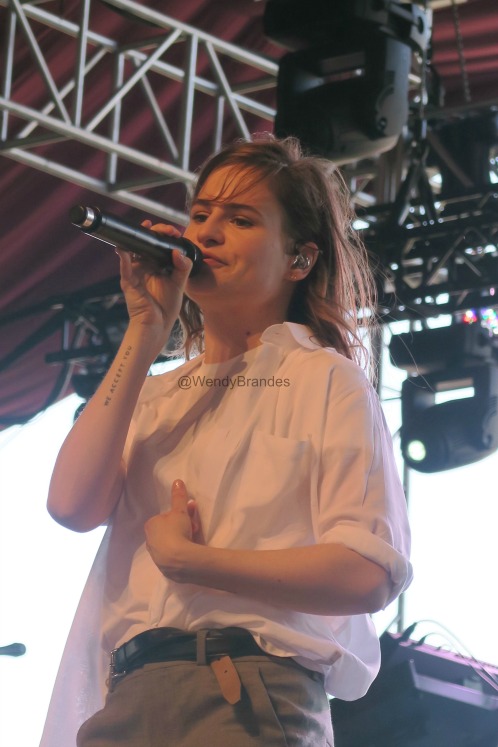 Christine and the Queens.

She also had mad stilt skills. 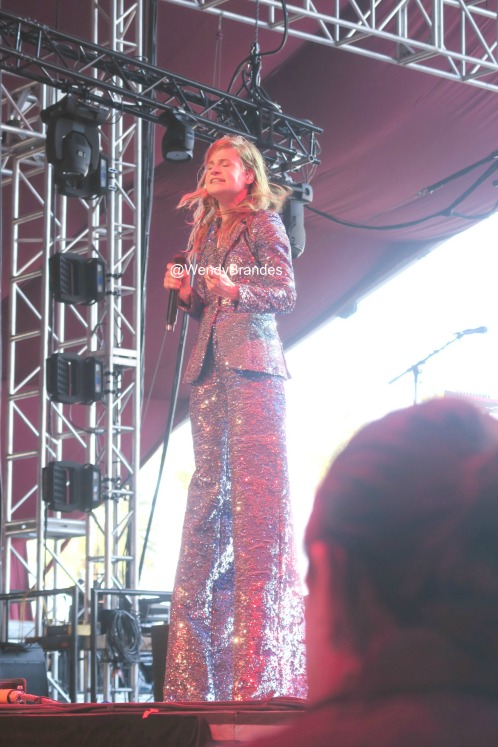 Coincidentally, the day after I saw Christine in November, I saw Ellie Goulding.  At Coachella, I saw Ellie a few hours after Christine. They go well together! 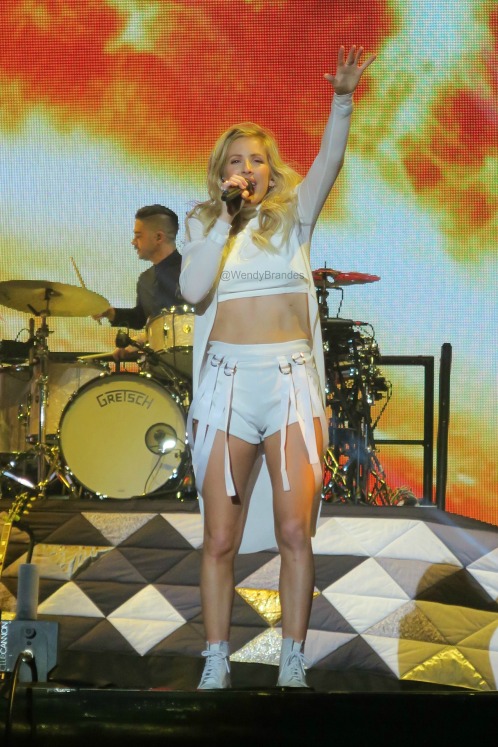 I didn’t take any photos of the duo Purity Ring that night, but if you haven’t heard them, look them up! They were new to me and I liked them.

The next day, my first priority was seeing the rap duo Run the Jewels on Coachella’s main stage. 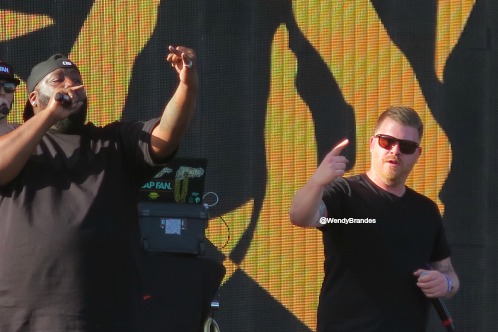 Killer Mike and El-P of Run the Jewels.

Seeing Bernie Sanders introduce RTJ’s Killer Mike (a big Bernie supporter) and El-P via video was cool, but I was there to see my gorgeous rapper friend Gangsta Boo perform her verse on “Love Again.”

The performance coincided with the release of this surprisingly kinky, National Geographic-type video for “Love Again.”

I was going to tell you why “Love Again” is so much more than the usual sexed-up rap track, but Thomas Johnson nailed it in this essay:


“Stereotypes and gender roles and masculinity and lady-like behavior are all uncouthly thrown to the wind, where the birds and the bees are fucking.”

Jessie and I lurked on the sides during the RTJ concert, avoiding the frenzied mosh pits that broke out among the music lovers. We stayed at the main stage, moving closer to the front during the Chvrches set, and even closer during electronic-music duo Disclosure‘s set. Disclosure brought out some good guests: Lorde … 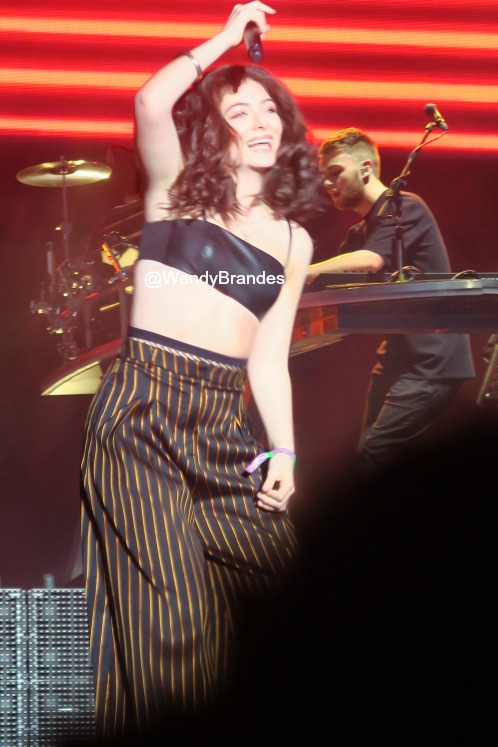 By the time Ice Cube came on, we were in the fourth row. 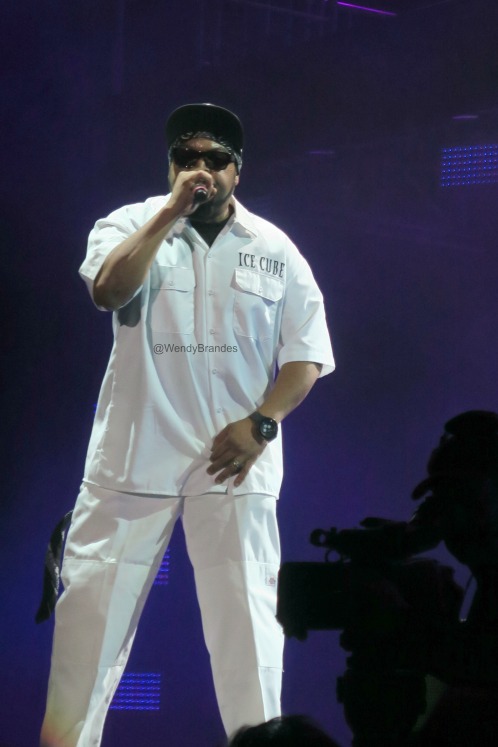 Cube brought out his son, O’Shea Jackson Jr. — who played Cube in last year’s N.W.A movie Straight Outta Compton — as well as former N.W.A colleagues MC Ren and DJ Yella. We were hoping for an appearance by Dr. Dre as well, but Cube saved him for the second weekend of the festival. Dang! At least we got a Snoop Dogg appearance. 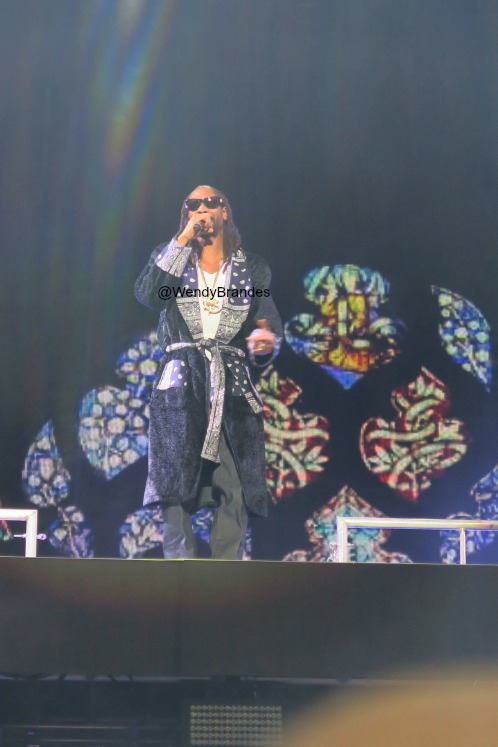 By the time Guns N’ Roses hit the same stage at 10:30 p.m., Jessie and I were in the second row. (A number of exhausted concert-goers gave up early and were lifted over the front barricades by burly security guards.) I never saw the group live in its heyday, though I was there in person for an unfortunate performance at the 2002 MTV Video Music Awards. I thought, “This is either going to be really good or really bad,” and it was really good! Lead singer Axl Rose, suffering from a broken foot, was confined to the rock-and-roll throne he borrowed from the Foo Fighters’ Dave Grohl, but his voice was on point. 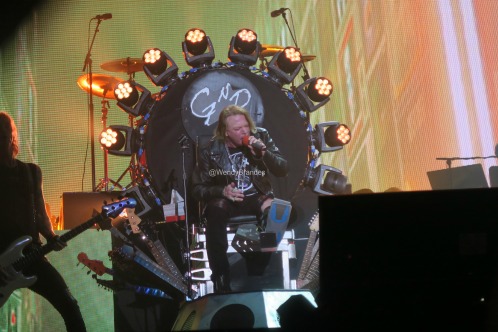 Axl Rose in Dave Grohl’s throne. Click for my 2015 photos of Dave. 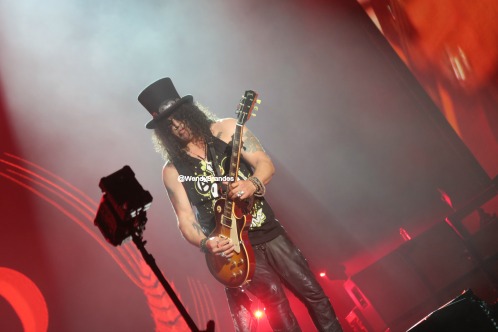 … and Duff McKagen were there. 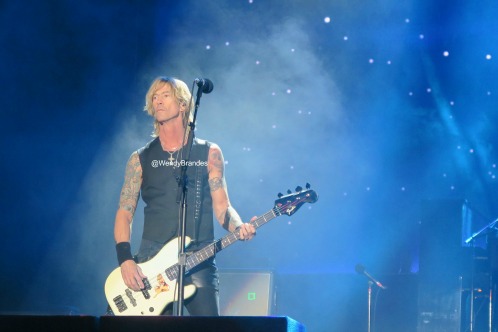 At a festival, you often get an abbreviated version of performers’ usual sets, but Guns N’ Roses performed for a whole 2 1/2 hours. 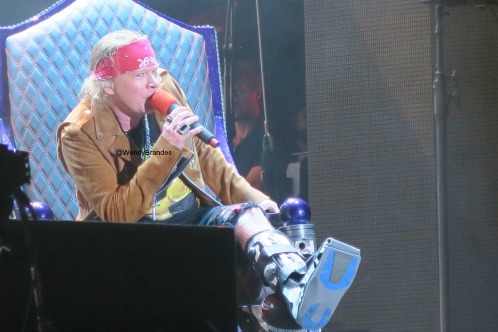 Another view of Axl.

By the time GNR finished at 1 a.m., Jessie and I had been standing at that stage for nine hours … and that’s not even our longest concert day ever!

After a very successful Saturday, I was totally mellow about Sunday’s schedule. The only performance I desperately wanted to see was Sia, who didn’t come on until 9 p.m. We showed up in the late afternoon, in time to catch some of 1990s punk band Rancid.

Rancid says “take yourself back to 1995!” and people around me are saying, ” I was 6! I wasn’t born!” Meanwhile, I was an editor at the Wall Street Journal ? #coachella #coachella2016 #asoldastheband #iagelikefinewine #notrancidatall #amused #honest

Then we floated around here and there until it was time for Sia. Consequence of Sound wrote, “Coachella is losing its shit over Sia’s performance,” and that’s a pretty good description. As Billboard said, it was more like performance art than pop music, and the people around me were in absolute awe.

Sia stood perfectly still on stage with her face obscured by a black-and-white wig topped by a giant bow. 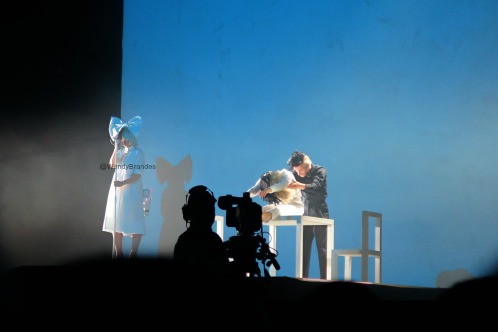 The action was provided by dancers who portrayed the emotions of each song. It initially seemed that the dancing was being projected onto the big video screens over the stage. Actors including Paul Dano, Kristen Wiig and young dancer Maddie Ziegler appeared … but those videos were actually pre-recorded. The dancers onstage so expertly imitated the moves in the videos that it wasn’t until I noticed some differences in lighting and angle that I realized something else was going on. Fascinating!

Sia singing in the background with two of her dancers in the foreground. Each song was like its own video but live on stage. @coachella @sia #sia #titanium #coachella #coachella2016 #music #video

Sia’s big bow reminded me of one of Lady Gaga’s 2009 looks, and I kept thinking that this is what Gaga should have done for her second act … disappeared in plain sight. How do you top being in everyone’s face in a meat dress? The best bet would have been to show nothing. But you know the corporate suits would never have approved of anything that daring for Gaga. Bureaucrats always want artists to stick with what worked in the past.

Anyway, I was so blown away by Sia’s performance that I wanted to hang onto that mood, so I skipped DJ Calvin Harris’s closing set. I sent Jessie to that on her own while I took myself on the Ferris wheel. I love Ferris wheels. 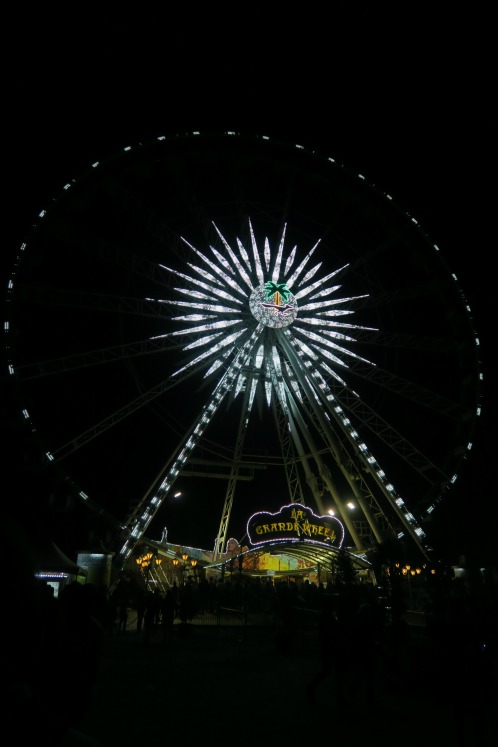 I heard Rihanna make her “surprise” appearance (that Jessie totally predicted the day before) during Harris’s set while I admired the view. 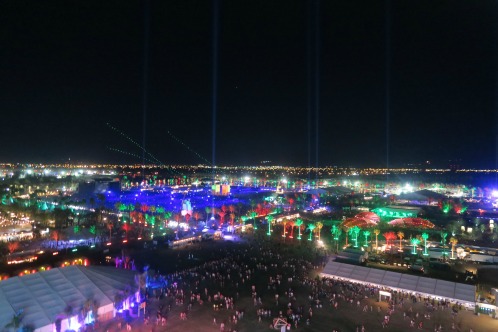 The festival from above.

That was fine. I was still flying high on Sia … and resting up before Jessie and I left the festival after midnight and drove directly from there to the airport for our 5:30 a.m. flight. WHAT WERE WE THINKING?! Staying awake during that drive was more brutal than all the time I spent on my feet at the festival.

Come back tomorrow for my Coachella fashion post. Hey, just because I’m all about the music doesn’t mean I didn’t notice what everyone was wearing!

You might also like
21 Savage Is in the Game. Your Move, Rick Ross.
What Wendy (and Stevie) Wore: Fleetwood Mac at MSG
The Truth About Success
Previous Post: « The Week in Review
Next Post: Coachella 2016: What Wendy (and Other People) Wore »