If you follow me on Instagram, you’ve already seen the seventh ring in my Maneater series: the Dragon and Knight. If you don’t follow me, first of all: follow me! Secondly, enjoy this little video of the piece, which is November’s Jewel of the Month.

I feel like I’ve been working up to the Dragon and Knight ring for a long time. The whole Maneater collection was inspired by bad-ass historical women, including Empress Wu, who already inspired three dragon-themed designs. I explained my thought process last year:

Also last year, I told JCK Magazine editor Jennifer Heebner about another inspiration for the collection and this ring in particular. As she wrote:

“Who would’ve thought that a $10 trinket from a New York City street vendor could influence an artist for decades? Certainly not Wendy Brandes. Back in the 1980s, the jewelry designer bought a dragon-themed brass bell because the seller told her it ‘had a really good knight.’ When she turned the piece over, she discovered a tiny knight-shape bell clapper sitting inside.”

Because of that, the Dragon and Knight is an especially meaningful Maneater design and I made sure it was perfect. I started with the lost-wax casting process, which I described in 2010 for people who are interested in custom designs. The Dragon and Knight ring required nine miniature wax models: the dragon body, the tail, two separate wings, the knight in the dragon’s stomach, the sword in the dragon’s mouth, the skull at her feet and two parts of her treasure chest. This photo shows six wax carvings. 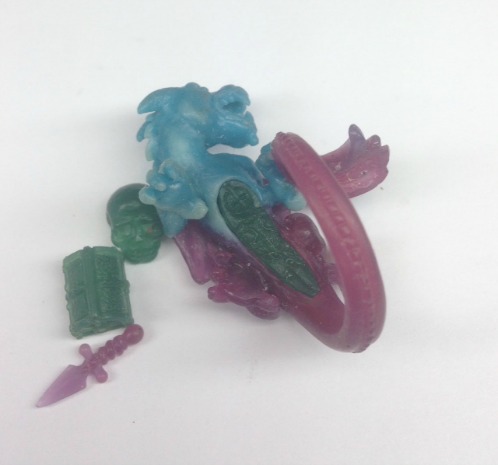 The different color waxes all have different qualities. Green is the hardest.

When my wax carver finished all the pieces, I carefully put them together and tried the model on in order to approve the overall size of the piece. 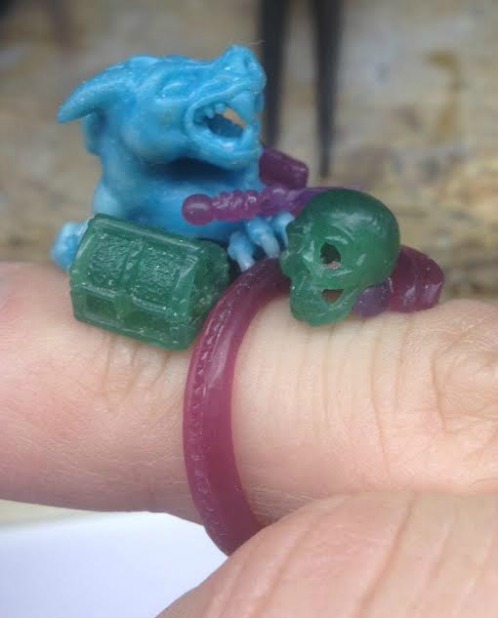 In the finished version of the ring, the dragon’s body is made of 18K yellow gold and covered with 400 tsavorites — green garnets — totaling 4.5 carats. 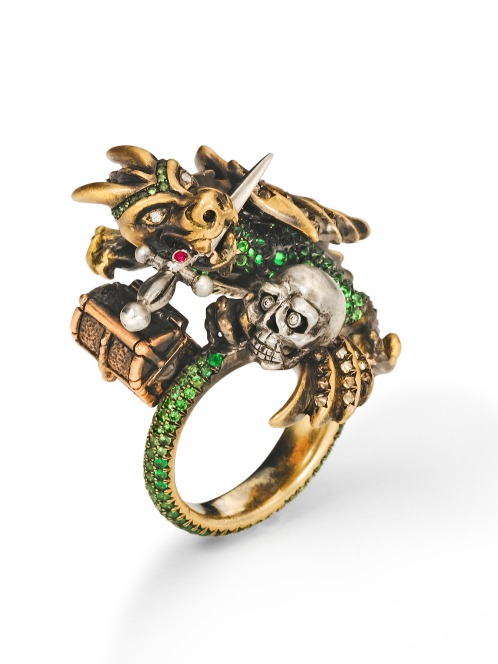 The 18K yellow gold wings are set with some of the 52 brown diamonds used in the piece, which total 35 points (there are 100 points in a carat). The dragon also has white diamond eyes. 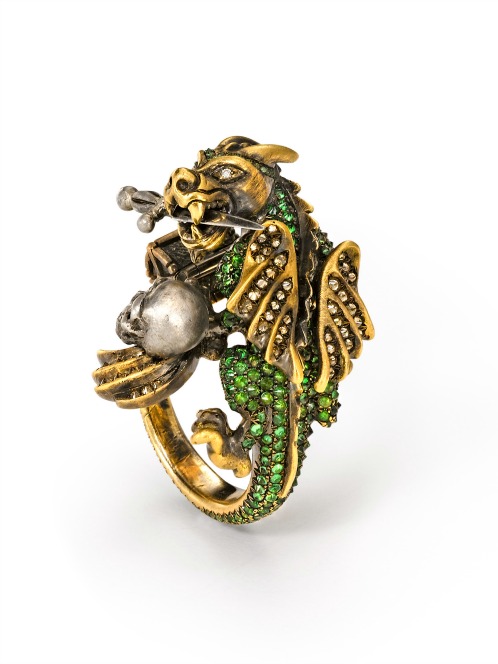 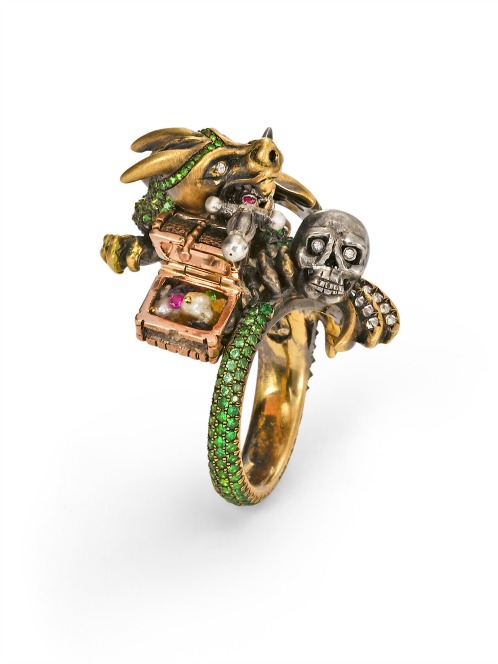 The helmet-wearing knight in the dragon’s stomach — hidden inside the band of the ring — is 18K white gold. 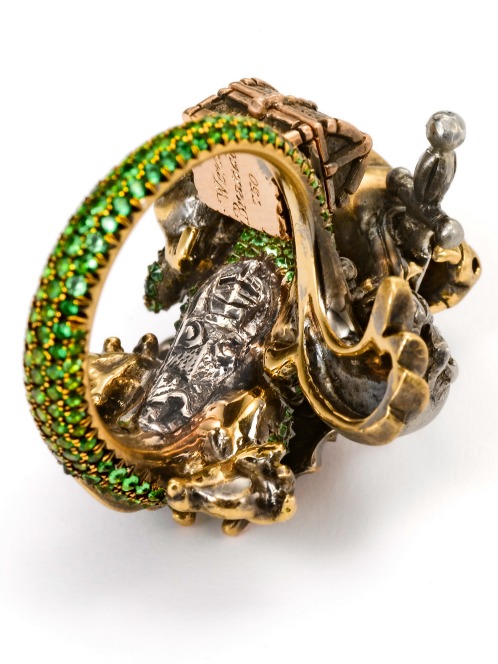 The skull with diamond eyes and the sword in the dragon’s mouth are both made of platinum, and the sword has a little ruby set in its hilt.

The total weight of the gold in the piece is nearly 30 grams — nearly a full troy ounce of gold. The platinum weighs an additional 2.79 grams.

Jewelry expert Cheryl Kremkow recently took a great close-up of the ring on her finger. 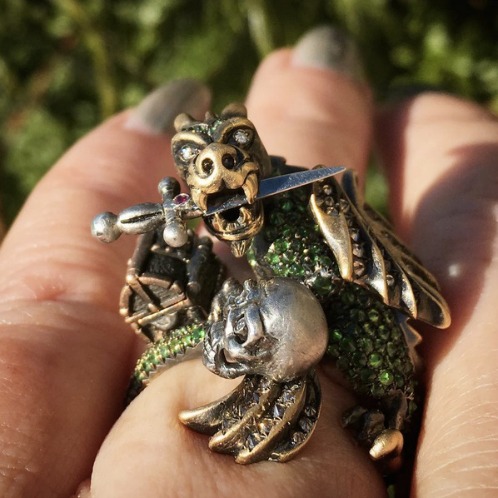 Last week, I showed you how it looked when combined with a fabulous nail-ring design by Deirdre Featherstone. 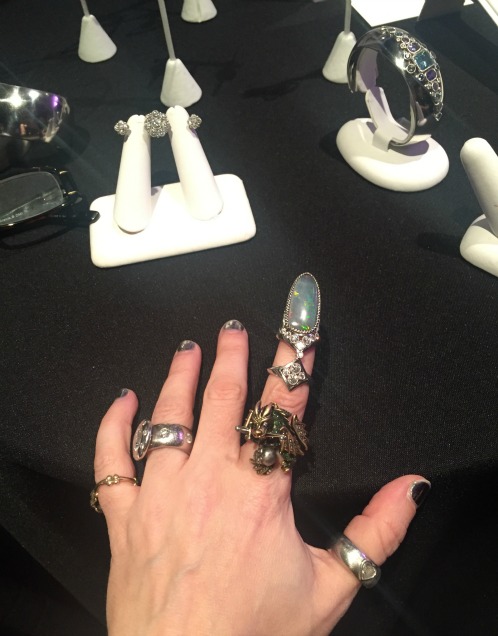 And thanks to Becky Stone of Diamonds in the Library for taking this set of photos. 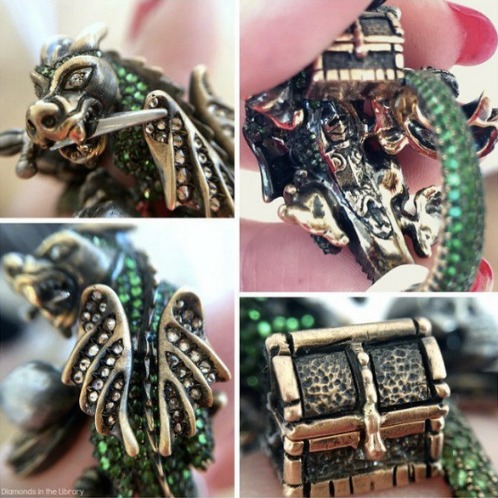 I like to think that both the real Empress Wu and the fictional Khaleesi would enjoy wearing this one!