It was a nice day for a white wedding yesterday, but an even better day to see Billy Idol at the Beacon Theatre in New York City. I first saw Billy live nearly 31 years ago … to the day! That show was at the Capitol Theatre in Passaic, N.J., on Feb. 4, 1984.  I was still in high school. If I remember correctly, my friend and I begged her of-legal-age male relative to get the tickets and drive us, and after the show, we found someone had broken his car window and stolen his radio. In other words, it was a perfect night.

I next saw Billy at the Beacon Theatre in 2005 when he toured for his album Devil’s Playground. The concert t-shirt I got at the show is one of my favorites ever and I have worn the hell out of it for the past 10 years. Naturally, I wore it again last night. I couldn’t manage a Billy Idol-style snarl to go with it, but at least I could try his fist thing. 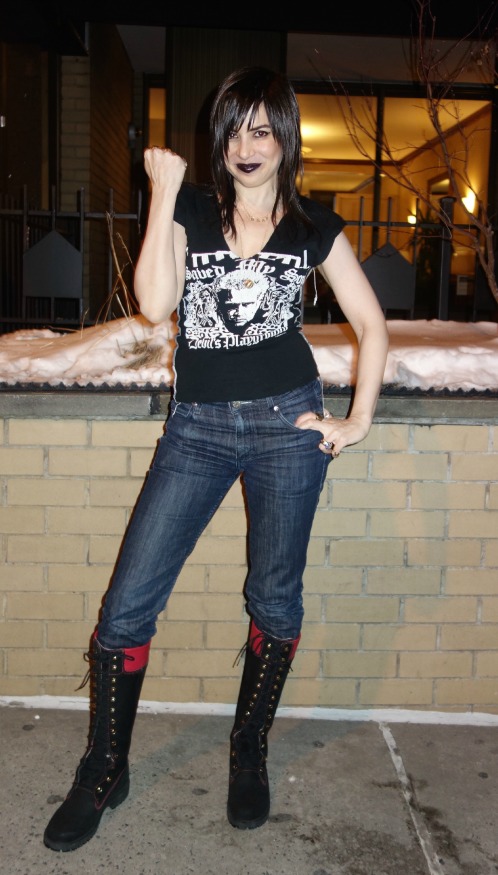 I still have to go through all my photos, but I got some fantastic video from the third row, stage left. I was doing a good job recording “Rebel Yell,” until I got overexcited by Billy’s toplessness and accidentally stopped my video.

I was like, “OH SHIT!” Then I started up again and you can see some great close-ups here.

I had a big crush on Billy’s guitarist Steve Stevens in the 1980s, so it was nice to have a special moment with him last night.

I still have to upload a little footage of Steve playing his guitar behind his head. That’s his signature move.

Steve and Billy have great on-stage chemistry, and you can see some of that during their intro to “White Wedding.”

During that song, I also had about 20 seconds practically face-to-face with Billy’s other guitarist, the handsome Billy Morrison.

After the show, as I searching the Internet for dates of the earlier Billy concerts I went to, I got an unexpected payoff. Years ago, I enjoyed a high!larious! literal interpretation of Bonnie Tyler’s “Total Eclipse of the Heart” video, in which very funny folks came up with alternative lyrics describing exactly what was going on in the video. Well! To my surprise, during my Billy Idol seach, I discovered DustFilm’s 2009 “literal” version of Billy’s 1982 video for “White Wedding” preserved on Funny or Die. I want to pick my favorite line to quote to you all but it’s so hard to narrow it down! Maybe “‘Cause there’s something wrong with this roo-oo-oom … Pirouette!!” Anyway, it’s a must-see.

Dustin McLean, the genius behind DustFilm’s literal music video, started with a-Ha’s 1985 “Take On Me” video, which had me literally laughing out loud (“They’re gonna beat you up with that pipe wrench.”). And I came very close to literally rolling on the floor laughing over his version of Beck’s 1994 video for “Loser,” mostly because, as Dustin noted, “The lyrics to my version almost make more sense than the original!” Please remember that those original lyrics include, “Get crazy with the Cheez Whiz.” The reason for the original crazy lyrics? Beck told Pitchfork in 2011 that “Loser” was “this fluke that I’d done messing around at a guy’s house in 1991,” adding, “It’s like if a friend took a stupid picture of you at a party on their phone, and the next thing you knew, it was on every billboard.”

Enjoy my Billy videos and the literal “White Wedding” video, and I’ll let you know when my best photos are on Flickr. If you’re going to Billy’s show at the Wellmont Theater in Montclair, N.J., tonight, you’re going to have a great time!

UPDATED TO ADD: Doh! How could I forget to include the photo of gorgeous Stacy Lomman with the drumstick she caught from drummer Erik Eldenius?! 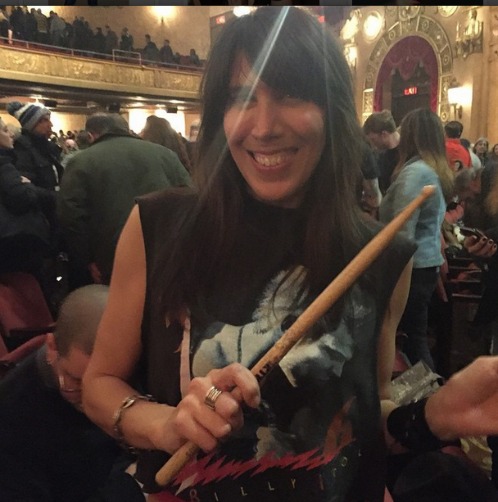 Stacy’s vintage Billy shirt is from 1987. Click here for a closer look at that captured drumstick.

You might also like
Musical Interlude: Southern Rap With Yelawolf, Rittz, Big Henry
Wanderlust 2014: I Tuned In to Liverpool
What Wendy Wore: Revolving Door of Clothes
Previous Post: « Thoughts on Holocaust Memorial Day and Auschwitz
Next Post: Wendy Brandes Jewelry in Rapaport Magazine »