All my posts this week have mentioned 1980s musicians: Devo, Ronnie James Dio, and Jimmy Somerville. I’m going to continue the theme and write about Frankie Goes to Hollywood for Throwback Thursday.

I’ve been pondering Frankie since Monday, when I remarked that I regretted chucking my iconic Frankie Say Relax concert t-shirt long ago. 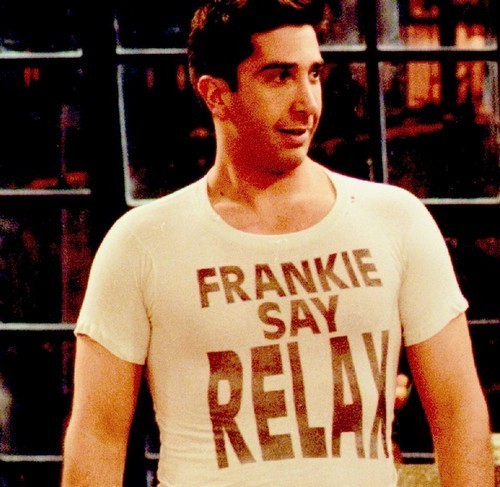 Ross on Friends kept his. I’m jealous. Click for clip.

I previously wrote that I saw Frankie at the Beacon Theatre. Considering that I recently discovered I had misremembered the date of a 1980s Depeche Mode concert, I suddenly suspected that my Beacon Theatre memory was inaccurate. I was right to be suspicious! It appears that Frankie performed at the Ritz, not the Beacon, in November 1984 and May 1985. I’m not sure if I went in November or May, but I will insist on the accuracy of my memory in one respect: It was a wild time. Fuck this disparaging New York Times review that says the response to the group was “considerably less than ecstatic.” My friends and I made our way to the front row, and I will swear on the head of my beloved flat-faced cat that everyone around us was dancing ecstatically. Let’s ask Mick Jagger — he was at one of those November shows.

Frankie’s big song, “Relax,” became a No. 1 hit in the U.K. after BBC Radio banned it for being too sex-ay. According to the sometimes-reliable Wikipedia, by the time the song reached the top spot on the charts in late January 1984, it had also been banned from the BBC’s Top of the Pops television show, even though the band had performed the song on the program earlier that same month. Eventually, the BBC had to un-ban “Relax” because it was moronic to try to ignore such a hot song. Coincidentally, 1984 was the last year that Jimmy Savile served as a regular presenter on Top of the Pops (his Jim’ll Fix It show — aimed at kids — continued airing on the BBC till 1994). In 2012, a year after Savile’s death at age 84, it was revealed that Savile had sexually abused people — the majority of them children at the time — for over 50 years. Some of the abuse took place on BBC premises. The news — and the fact that the BBC dropped a news investigation into abuse allegations — caused a crisis at the broadcaster. So there you have it: A big bureaucracy censoring a pop song that referred to gay sex even as it let a monster ruin the lives of hundreds of people. Always be wary of censors! The fuckers always want to wash your mouth out while ignoring the fact that their whole house is filthy.

Anyway, here is the Frankie Goes to Hollywood “Relax” video, which is set in a kinky club populated by leather daddies, a blonde Amazon, a tiger, a toga-wearing holdover from the Roman Empire … as Stefon would say, “This place has EVERYTHING.”

Lead singer Holly Johnson blogged this year that he’s been asked “a million times” about the name of the band. Here’s his explanation.

And here’s the audio of a 1978 interview of Johnny Rotten of the Sex Pistols. While joking about the many people he would like to kill (including Frankie Goes to Hollywood concert-goer Mick Jagger), he names Jimmy Savile, saying he’s heard “some rumors.” “I bet he’s into all kinds of seediness. We all know about [it] but aren’t allowed to talk about [it],” Johnny says. Interesting.

You might also like
Kurt Cobain, Walmart, and Guns
Throwback Thursday: Dressing Up at Decades in 2007
America's Lost Band: The Remains
Previous Post: « High School Censorship and Jimmy Somerville Singing
Next Post: Cyber Monday Sale Is December 2! Plus, the Week in Review »