Earlier this month, Lindsay Lohan — the once-promising actress and former customer of mine who is now best known as a death-pool perennial — avoided a stint in jail by agreeing to spend 90 days in rehab.  When the news came out, I immediately thought of singers Tristan Prettyman and Anya Marina, who have a song called “Lindsay Goes to Rehab” (sample verse: “Lindsay/you got a watter bottle/that ain’t no water bottle/that be a vodka bottle“). The kicker is that they wrote the song in 2007. Still current six years later! Who would have imagined that Lindsay would still be alive, wasted AND a free woman in 2013, albeit a woman with an impressive mugshot collection? This gal has Keith Richards’s constitution and the Teflon Don‘s get-of-jail-free card. By the way, if you haven’t read the New York Times story on Lindsay and the movie The Canyons, it is a must.

I heard the Marina/Prettyman song about Lindsay at a March 12 concert at the Bowery Ballroom. I first saw Tristan Prettyman perform at The Weinstein Company’s pre-Oscar party the month before, and I was so impressed that I immediately bought tickets to her New York show. I knew absolutely nothing about her opening act, Anya Marina. I was delighted to discover she is not just an excellent singer and musician, but a brilliant raconteur as well. In fact, during her performance, I was thinking that she should promote herself as a comedian who sings rather than just a singer.  Here’s my video of her talking about being dropped by her record label after putting out three albums, two EPS and getting songs on the Grey’s Anatomy and Twilight soundtracks:

Anya recently moved to New York and she talked about her experience on the D train. The extremely male laughter you hear in the background belongs to MrB, aka “Mr. Laugh-Head.”

The crowd that was there for Anya and Tristan was mostly female and extremely enthused. Both of the performers said they’d been through recent rough times, professionally and/or personally, that made them think of quitting music. (Everyone I know in a creative industry can relate to that.) But, they said, their positive experiences on their tour together renewed their passion for their field. Tristan thanked her fans at the end of her set.

The tour isn’t over yet; you can still catch Anya Marina and Tristan Prettyman by checking tour dates here.

Even someone who seems like an overnight success doesn’t necessarily have everything fall into her lap in this line of work. The singer Pink’s first album, Can’t Take Me Home, came out in 2000; the tracks “Most Girls” and “There You Go” were Top 10 hits in the U.S. Since then she’s had other Top 10 singles, won three Grammys and been nominated for multiple others … but her most recent album, last year’s The Truth About Love, is her first No. 1 album. Twelve years of being a major pop star before getting a No. 1 album! I’m glad she didn’t give up before she achieved that, because she keeps getting better and better. If you get a chance to see her live on her The Truth About Love tour, do not hesitate to go. I saw her at Madison Square Garden on March 22 and loved every second of that show. 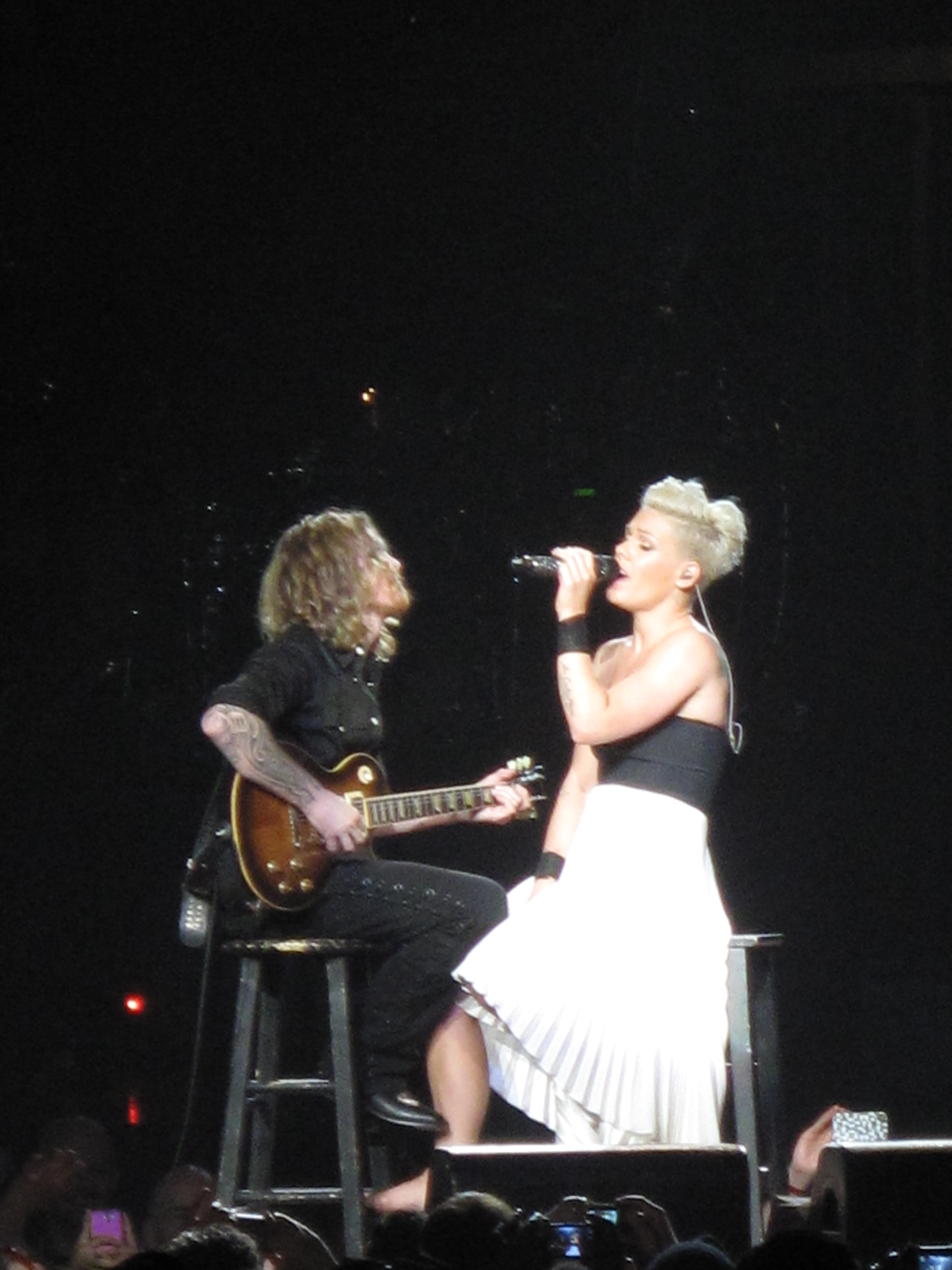 My photo of Pink performing at Madison Square Garden in March 2013.

I was impressed by her voice, her six-pack abs … 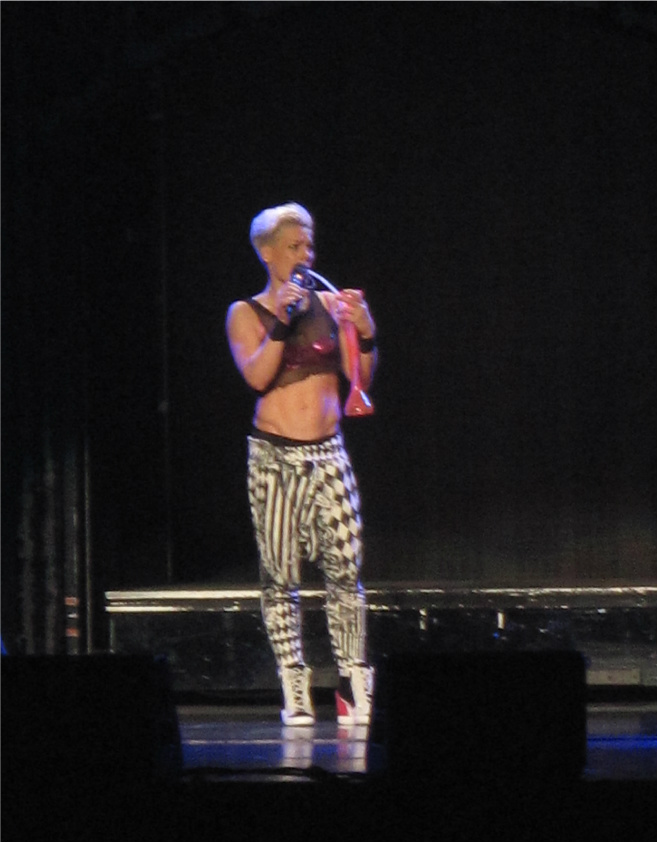 …and her signature (and apparently core-strengthening) aerial acrobatics, especially when she flew right above the audience during “So What,” one of her encore songs.

I was also amazed by her interaction with the audience. She accepted and commented on gifts from fans in the front row (admiring a hat for her young daughter, for instance) and even signed two autographs. Yeah, between songs at Madison Square Garden, she casually signed a couple of autographs! Who does that? After the first autograph, she wandered off with the fan’s pen while chatting to the audience at large. Realizing she was still holding the pen, she joked about being a klepto, went back to the autograph seeker and returned the pen. Let it be known that Pink will not steal your office supplies! And this was just a couple of days after she interrupted a song during her Philadelphia show to tend to a crying little girl in the audience. I’ve been going to concerts for more than 30 years and I don’t think I’ve ever seen such a big star who was so cordial, grateful and down-to-earth during a live performance. It’s not that I don’t love a total diva — variety is the spice of life, right? — but there was something really moving about Pink’s relationship with her audience.

I felt very inspired by the positive attitudes and persistence of all three of the musical wimmins I saw in March. My next big concert is Rihanna in May. I’m not sure if I’ll be quite as emotionally uplifted by that show, but I’m looking forward to a good contact high. I bet you can catch a Lohan-worthy buzz just by being in the same building as Bad Gal Riri.

UPDATED TO ADD: Speak of the devil! Here’s Lindsay Lohan sitting under a table, on the floor of a club. As Anya Marina and Tristan Prettyman would say, “Lindsay/you better check yourself/check yourself/before you wreck yourself.”

You might also like
Rihanna Where You At?
What Wendy Wore: Madonna at Madison Square Garden
Fashion Repeats Itself: Gaga Has Noli Braids!
Previous Post: « Throwback Thursday: 1996 Dress, Hair and Photobomb
Next Post: Customer of the Day: Brenda DiForte and Her Genie Necklace »