In fashion, what comes around goes around …. and around and around and around. On Thursday, I read a Wall Street Journal story called “Transparent Style That’s Sheer Daring” by the lovely Christina Binkley, which was about see-through clothing being big for spring. That trend has been bubbling up for a while — I wrote about it for the Huffington Post in March 2012 — but the look is finally hitting critical mass. A lot of people think fashion fads blossom overnight, but styles often take several seasons or years to go from Never Is the Next New Thing™ status to “beloved by fashion influencers” to mainstream. I traced the slow progress of peplum looks for the Huffington Post back in 2011 and peplum is still going strong now; I’m not even sure it’s peaked yet. Similarly, this month, I checked out the jewelry section on a big retailer’s website and discovered the first two pages were entirely devoted to word and letter jewelry — the same concept I showed that same retailer (to no interest) in 2010.

Being first, or among the first, isn’t the best business plan in fashion. As Lisa Armstrong remarked in her recent article on Tory Burch for the Telegraph:

I compare the timing issue to catching a once-daily train. If you arrive at the station two hours early, the train ain’t in the station. You wait around feeling cold and lonely and looking at your watch, only to get on that fucking train at the same time as the people who arrived as it showed up or even a few minutes later.

Even though I know better now, I can’t put the brakes on new ideas and wind up designing jewelry that people find to be strange or disturbing, whether it’s a style that advertises one’s age, is mildly obscene or insanely detailed. (I and my customers have been told, in all seriousness, that my IDGAF and GTFOH necklaces are contributing to the coarsening of our civilization. Makes me feel so rock ‘n’ roll, like a mop-topped Beatle.) I console myself with what Lisa Armstrong went on to say: “But without innovation, taste eventually becomes arid.” And maybe one day I’ll accidentally show up at the train station at the right time, despite myself.

But these thoughts have nothing to do with the real reason Christina’s story jumped out at me. That was the photo of Rachel Weisz in a partially sheer Louis Vuitton dress at the Golden Globes. 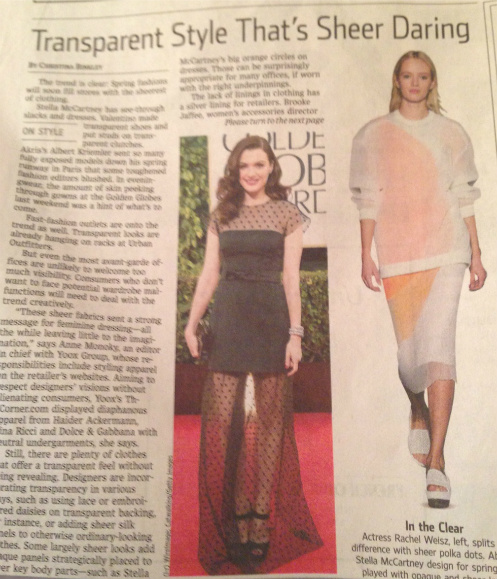 That’s Rachel in the black.

It reminded me of this Versace gown — also sheer on the top and bottom — that I wore in 2003. 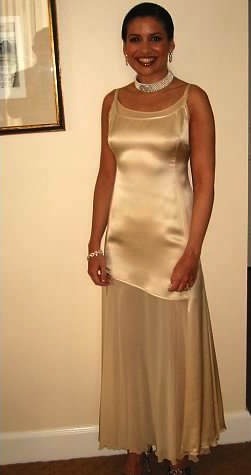 The dress was vintage when I got it. Some peeps at Versace thought it was probably from a collection before Gianni Versace’s 1997 murder, so I want to tip my hat to the late, great designer for this one. If only I still had the dress, I’d be right on trend! But it fell victim to a bad tailor and I had to let it go.

At least I’ll be able to shop my closet for graphic pencil skirts. Also on Thursday, the New York Times ran a short item called “Skirts With a Point,” that said:

“The pencil skirt, knee length or longer, a little more hard-edge, is a big statement for spring. You will see it in denim (Miu Miu), in graphic black and white (Louis Vuitton), in guipure lace (Derek Lam) and embellished with fabric flowers (Dries Van Noten).” 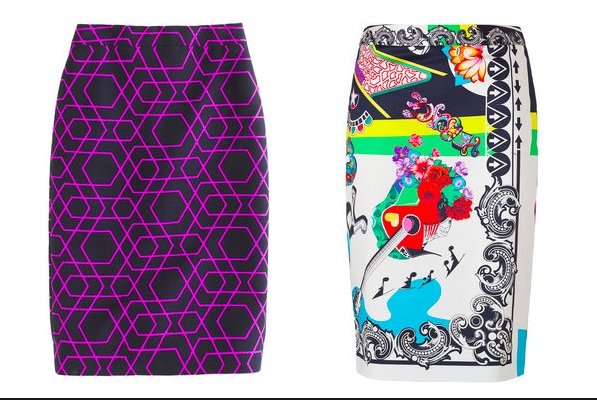 I am all over this thanks to some early ’90s skirts by designer Todd Oldham. And what great timing too — designer/blogger/stylist Stacy Lomman has recently been helping me style these rainbow-y pieces. I was so excited to wear this skirt with an old Versace top in November … 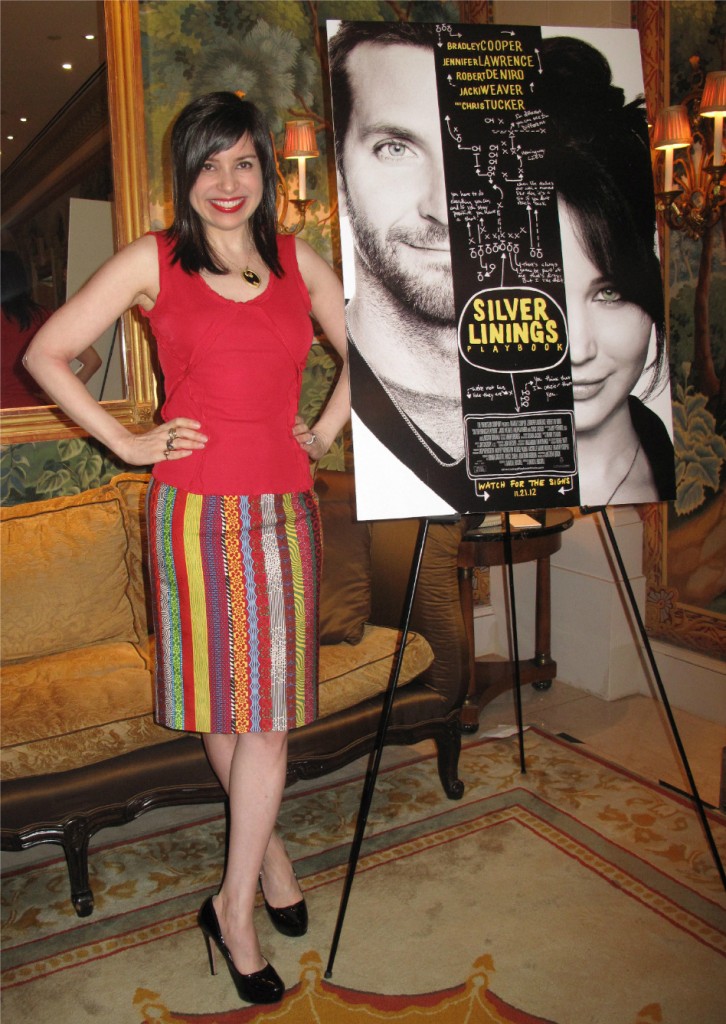 … and, earlier this month, Stacy found two new tops to go with this Oldham skirt, so I’ll be taking this one for a spin soon. 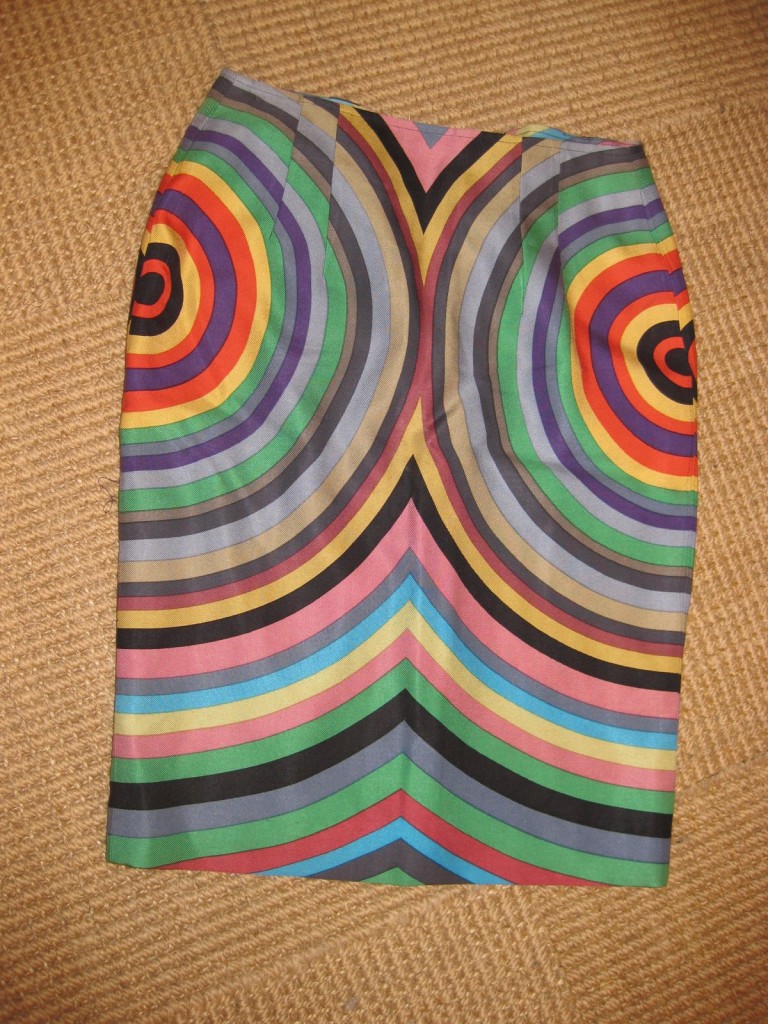 Click to read about the challenges of styling this skirt.

So a tip of the hat for Todd Oldham, too, for keeping me stylish in skirts that are at least 15 years old. My advice to y’all now: don’t buy any of the new sheer clothes or pencil skirts solely because they’re “in.” Only buy them if you adore them … and then keep them forever, because they’ll be back!

You might also like
Things I've Read in Newspapers
Happy Halloween From Bananarama
What Wendy Wore: Committee to Protect Journalists Dinner
Previous Post: « Words of Wisdom From Gianni Versace and Liu Qianping
Next Post: Now Playing: Emeli Sandé. Plus, the Week in Review »