I like art and I like history, but sometimes one distracts me from the other. I started writing a post about a painting I have in my apartment, so I took a picture of the wall where it was hanging. That made me think of Up Against the Wall Motherfuckers, the name by which a New York City-based anarchist group of the 1960s is commonly known.  It was originally a guerrilla art/protest group called Black Mask, which briefly shut down the Museum of Modern Art and disrupted gallery exhibitions, among other activities. The group evolved into an organization known among its members as The Family (unrelated to Charles Manson), according to painter Ben Morea, who co-founded Black Mask with poet Dan Georgakas. The Family became known as Up Against the Wall Motherfuckers because of a quote in its first leaflet, as Morea explained in a 2006 interview:

“We put out a leaflet explaining why were doing this, but those of us involved realized that we weren’t really Black Mask anymore and so we didn’t want that name on it. There was a poem by Leroi Jones with the line ‘Up Against The Wall Mother Fucker’ in it and I suggested we put that on there. Somehow it stuck and from then on in everyone referred to us as that. It wasn’t a deliberate thing on our part. It would have been fairly pretentious to just name ourselves ‘The Motherfuckers. (laughter)'”

The prose poem by black nationalist LeRoi Jones (now known as Amiri Baraka) that Morea quoted was “Black People!“, which urged blacks to rise up against whites. It reads, in part:

“All the stores will open if you say the magic words. The words are: Up against the wall mother fucker. This is a stick up! Or: smash the window at night (these are magic actions) smash the windows daytime, anytime, together, let’s smash the window drag the shit from in there. No money down.”

The founders of Black Mask were white. They said they wanted a revolution for all races. A Black Mask magazine from October 1967 said:

“If the blacks [have] decided to get together with their brothers first, then the whites had better do the same: they can no longer ride the black panther. Yet revolution has no color barrier: if blacks can do it, whites better learn, for only then will Revolutionary power replace Black Power, revolution replace nationalism.” 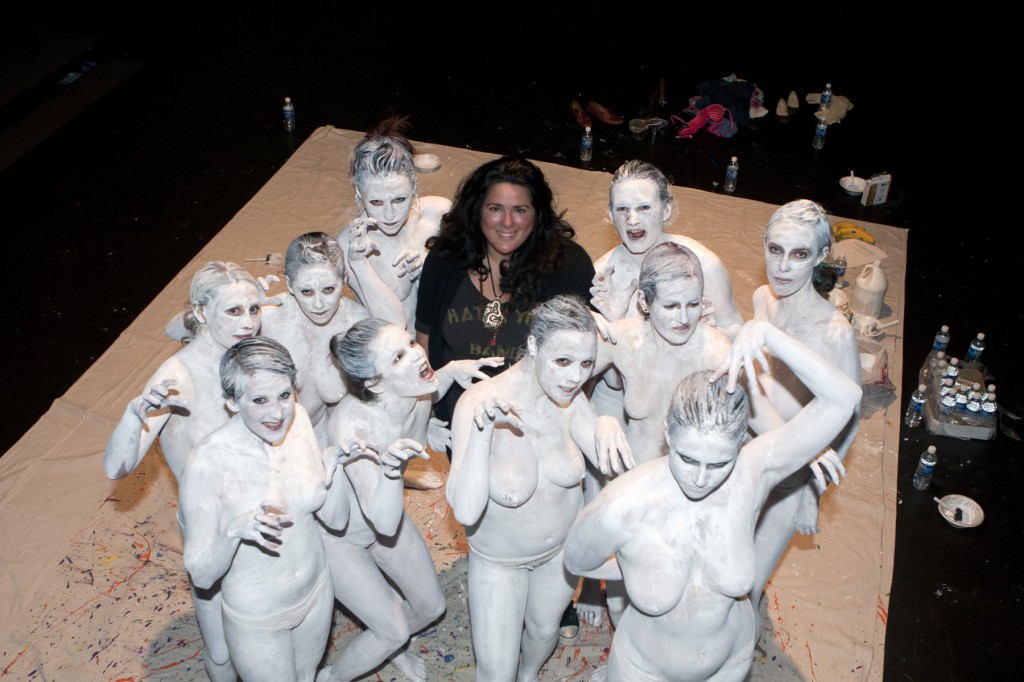 It was one of her paintings that I was photographing when I was distracted. I got a big kick out of Ashley’s brightly colored, humorous art when I attended an exhibition she had in New York in March. I was particularly intrigued by a painting that included all my favorite “P” things: pink Champagne, pastries, a purse and a pig. 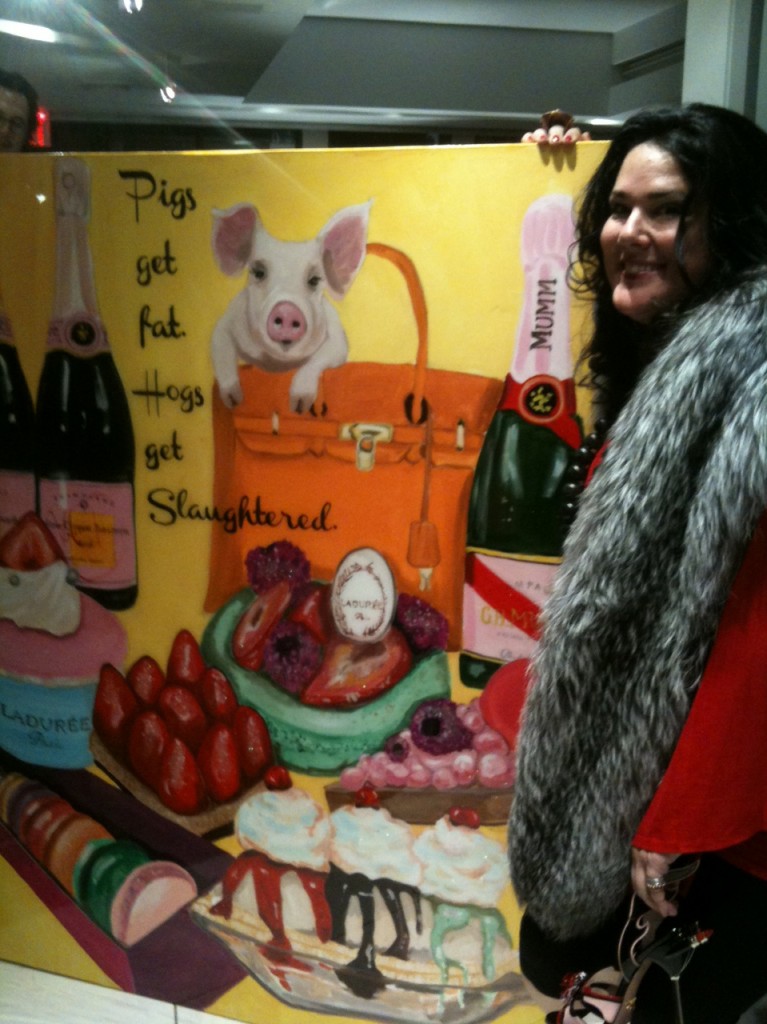 My photo of the artist with her painting.

“My paintings are representative of the world I see around me. I am inspired by pop culture and things that I find intriguing. I really like to combine the use of words and images in an unexpected way to create a smart, colorful bold statement. Most importantly my love of color is what really makes my artwork ‘pop.’ My paintings are statement pieces that are a reflection of the experiences I have in my life.”

The painting I liked was 5′ by 4′, and when I went home and measured the walls, there was no room for it. I went back to the gallery with MrB in tow to examine other options, particularly Ashley’s series of paintings depicting Vogue editor Anna Wintour. “I started this series because I was completely tickled thinking about how bossy and bitchy Anna is perceived to be,” Ashley later emailed me. ” When something tickles me, my mind starts racing and I see images.”  I was leaning towards Ashley’s painting of Anna as a popsicle … 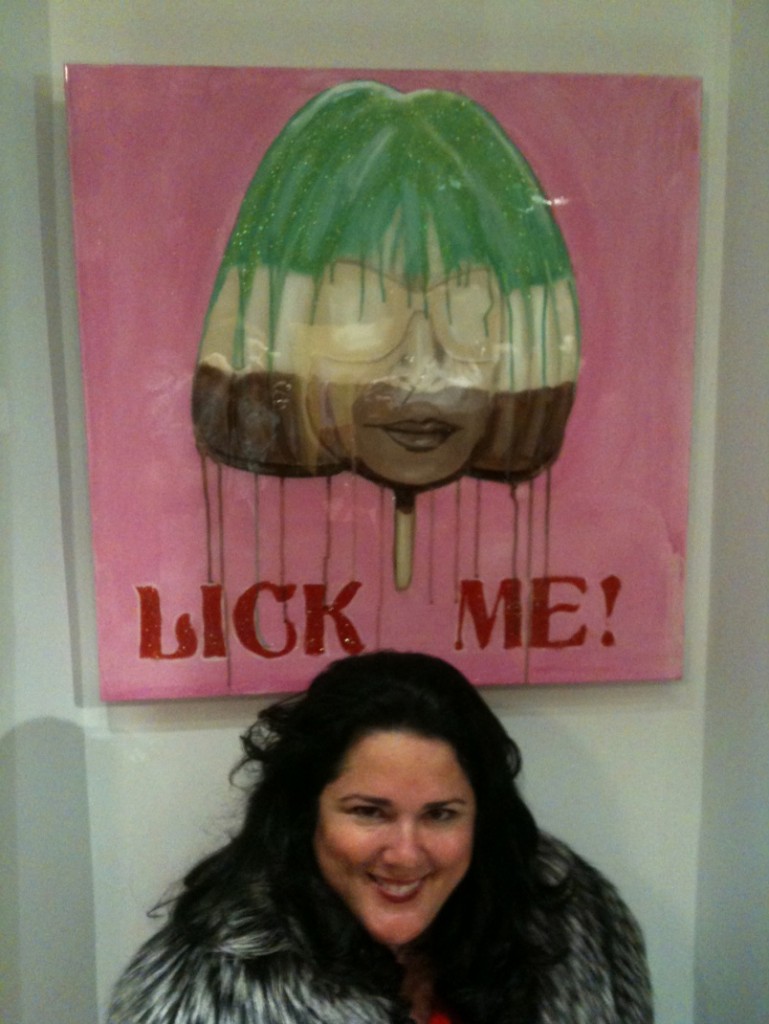 My photo of Ashley with her Anna Wintour popsicle painting.

… but MrB preferred this one. 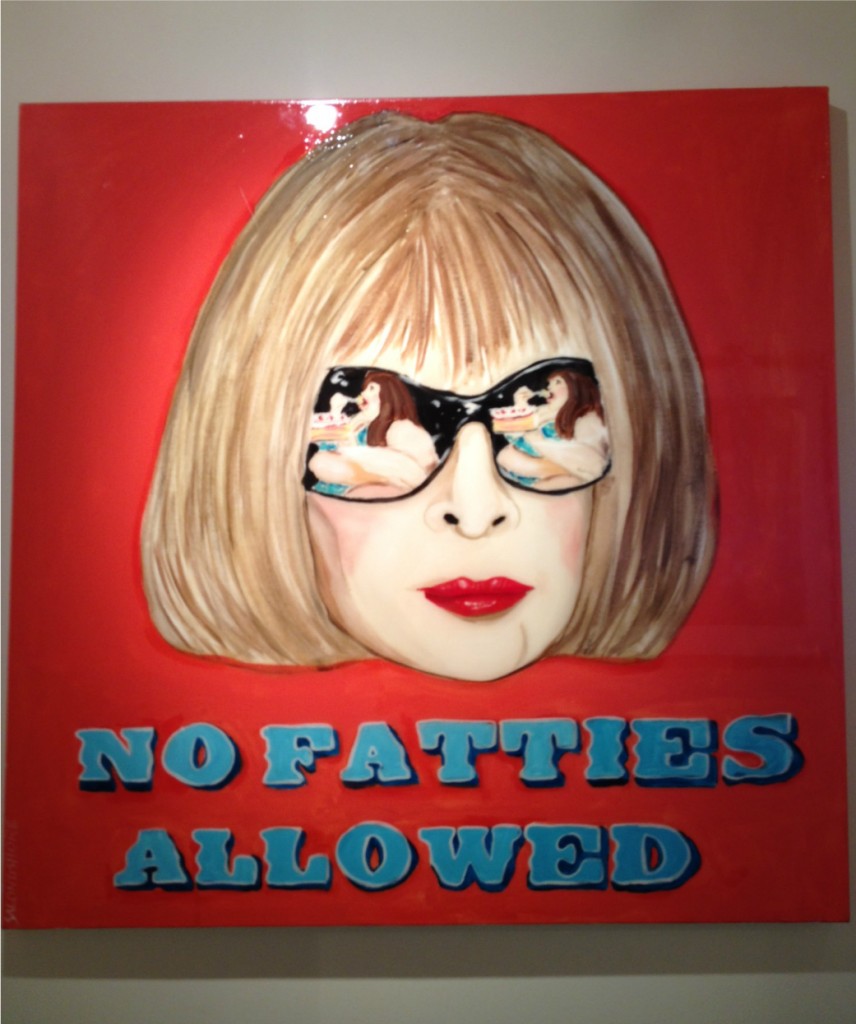 A photo taken in my apartment.

Ashley emailed me about her inspiration for “No Fatties Allowed” painting:

“A woman was telling a story about Vogue and Anna, and someone said that she ‘HATES FAT PEOPLE.’  I also heard that she wouldn’t talk to [Vogue editor] Andre Leon Talley for six months because he was sooooo fat. I thought that was hilarious. I can’t imagine not talking to a good friend for months because she was in a bloated, muumuu-wearing  phase. …  My biggest fear would be for Anna Wintour to watch me eat or to see me scarf down a cheeseburger from McDonald’s or God forbid she see me after 10 days of Mardi Gras down here in New Orleans.  I just love daydreaming about what goes on in that woman’s head …”

Ashley concluded,  “I love the fat girl eating cake [reflected] in [Wintour’s] glasses because she doesn’t give a damn.”

If you’re hitting the European art shows later this year, you’ll find Ashley exhibiting in Zurich, Antwerp and Art Basel. Closer to home, she has a collaboration with Anthropologie this fall. And you can always contact her through her website.

Here are a few things that are on my other walls: A portrait of me in the style of Anne Boleyn, painted by my friend Natasha Zupan … 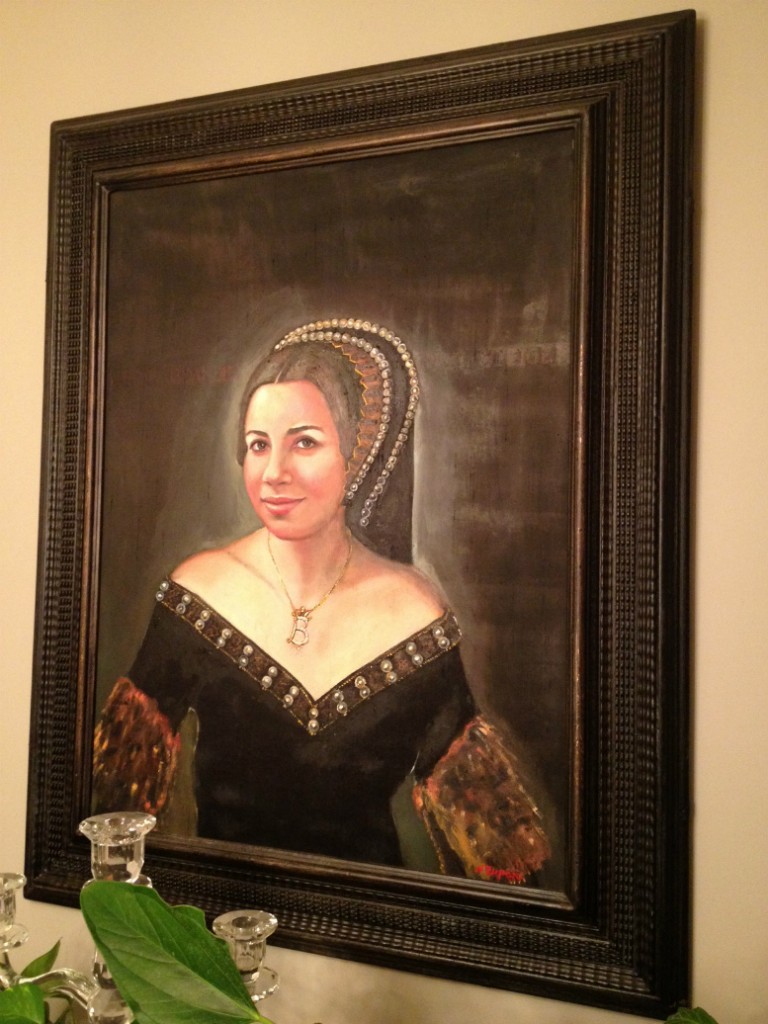 … two rainbow-y paintings I got in Bratislava, Slovakia … 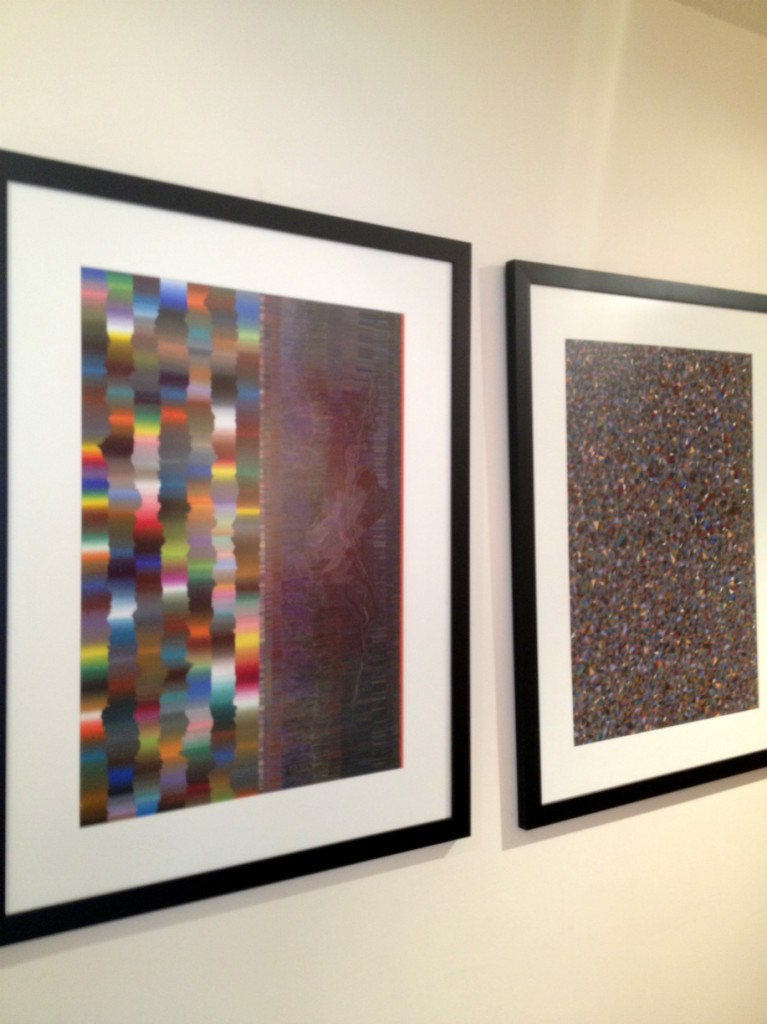 … a giant William Wegman Polaroid of my dogs Gigi and the late Mr. Chubbs … 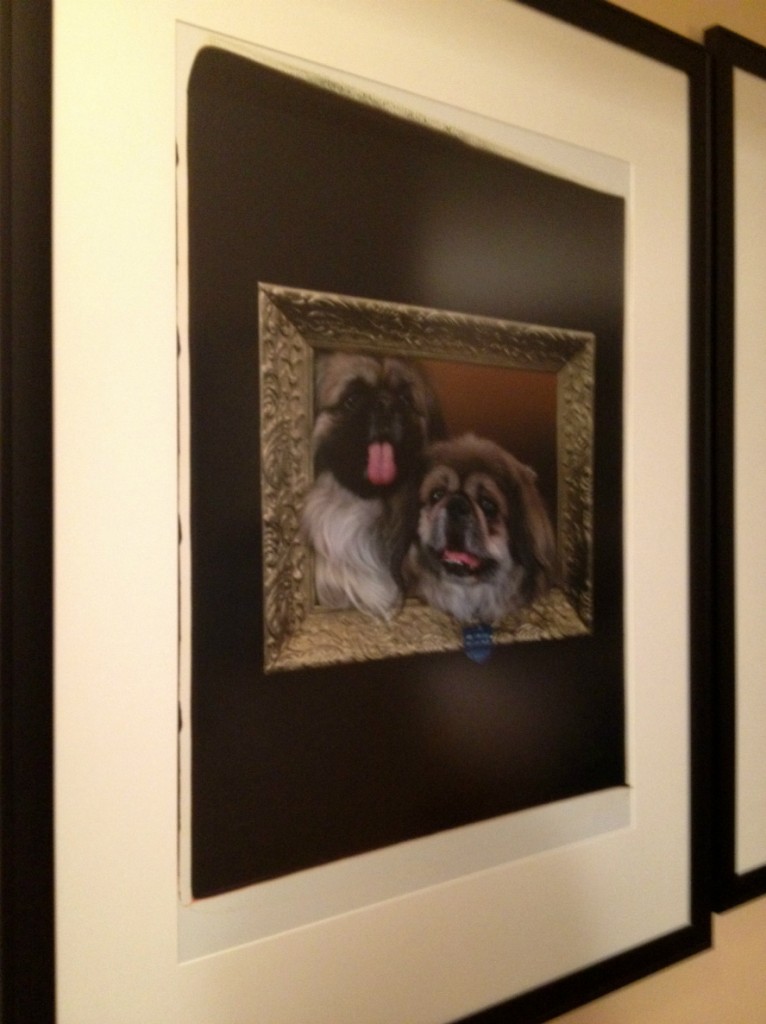 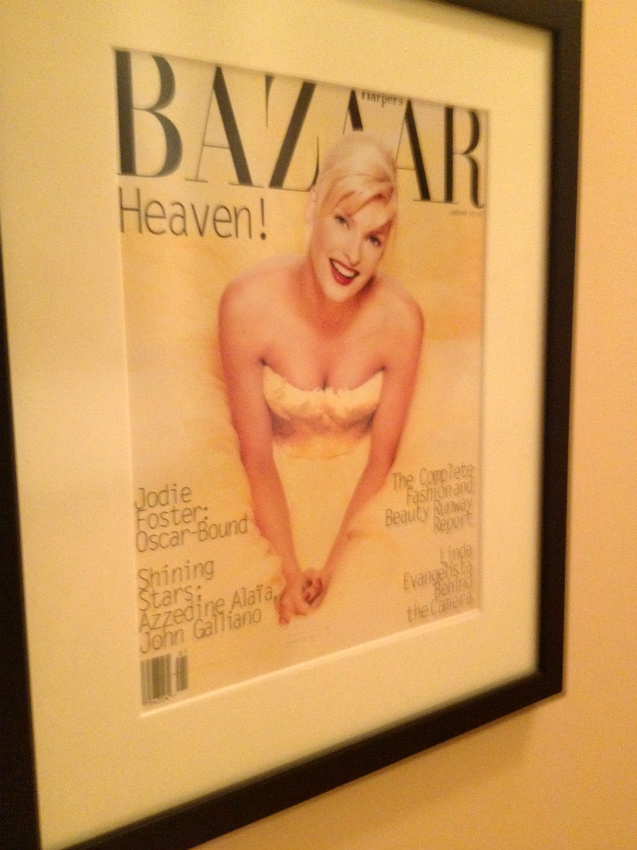 … and a topless photo of Madonna that hangs above my bed. 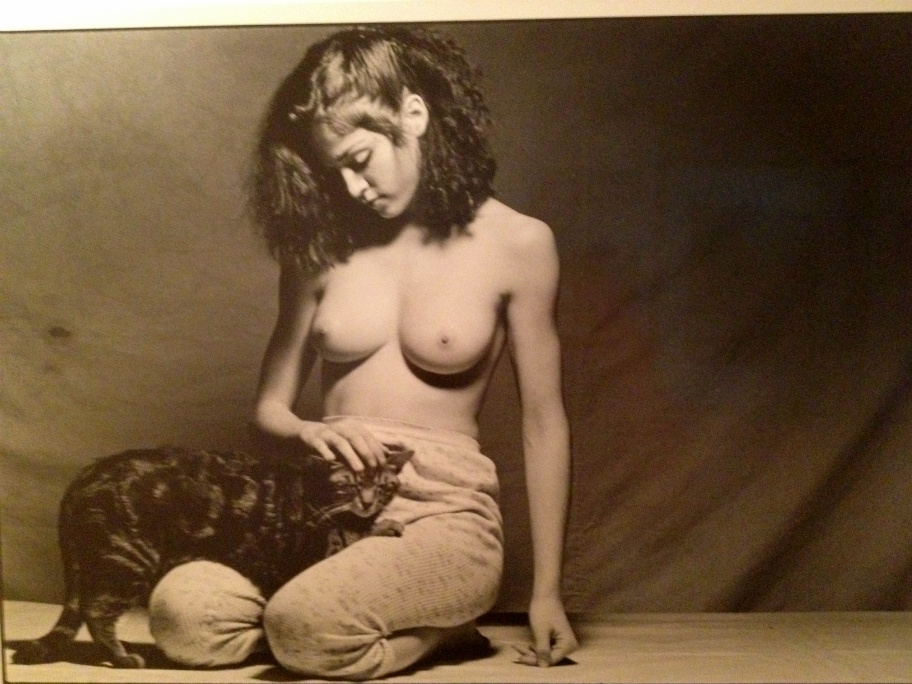 The wall with the most going on is my stepchildren’s bedroom/guest room. Gorgeous blogger Jennine of The Coveted and Independent Fashion Bloggers lived in it for about a month in 2010. She calls the room “The Frame Room” because all the work- and school-related framed things migrated there. On the small section of the wall shown below, you can glimpse two caricatures of MrB drawn by artists at the Wall Street Journal, where he was the managing editor for 16 years; two original metal printing plates of Wall Street Journal pages; a certificate given to MrB in recognition of a fellowship and, at the bottom, my 1989 diploma from Columbia University. 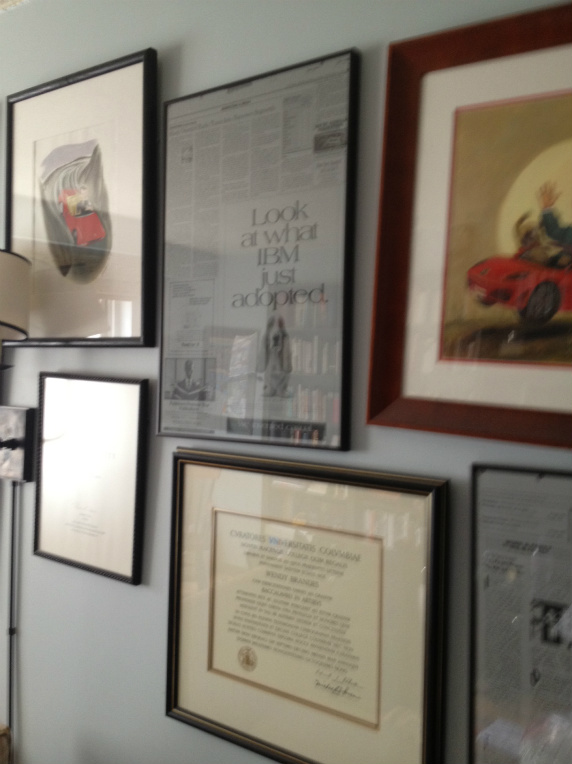 Seeing my diploma hanging on the wall always reminds me that during the politically and socially tumultuous year of 1968, two activist student groups united to lead a strike against the university. Students occupied buildings, paralyzing Columbia’s operations and taking a dean hostage for a day. The New York Police Department was called in, riots broke out and many students were arrested and/or injured. The intrusion of “real life” — including racial unrest — upon a college campus was a significant cultural event, and it’s detailed in a book by J.L. Avorn, a Columbia alum and former editor of Columbia’s school newpaper, the Spectator, where I’m currently chairman of the board of trustees. The name of the book? Up Against the Ivy Wall. (It’s out of print, but you can buy it used).  A year after the student revolt, the Spectator’s magazine supplement at the time published a commemorative game named … Up Against the Wall, Motherfucker! (exclamation point theirs, not mine). You see? Everything comes full circle, even this post.