After quite a few Minx manicures, I told celebrity manicurist Tracylee Percival that I was ready to get back to nail art. She suggested glitter for the holiday season. We’re calling this look “Winter Solstice.” 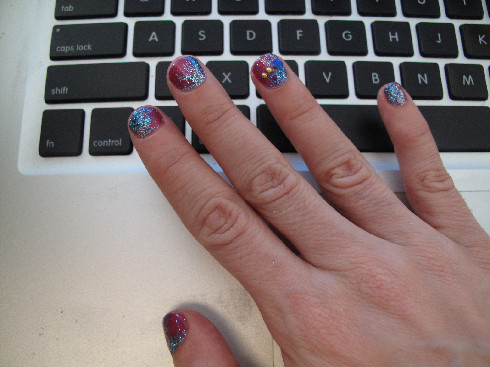 The bottom layer is Star Burst by Gelish. Tracylee added turquoise, blue and purple glitter, as well as a few nail jewels. She liked the effect so much that she went home and gave herself the same manicure. 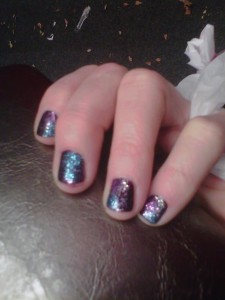 We picked the turquoise glitter to match the Minx on my toes. (Don’t know what Minx is? Click here to read all about it.) If you have a foot aversion, look away now! 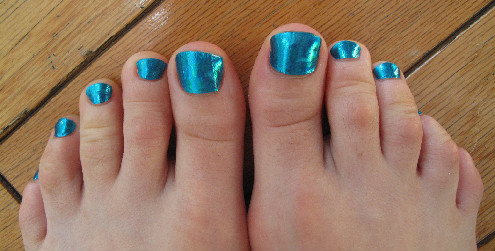 I met Tracylee due to a non-New Year’s resolution. For the past few years, before the end of the year, I think of something I’d like to handle better in the future. Instead of waiting for New Year’s to put my plan into action, I do it immediately. Basically, I wind up with November resolutions. In November 2010, I decided to get my nail situation under control because I’m always modeling rings for my jewelry line and poorly groomed nails were distracting from my work. (This was driven home to me by my outspoken friend Barbaralee, who admired a new ring design and then said, “Now you need a manicure.” And, yes, I require all my friends to have “lee” as part of their names.) I started seeing Tracylee that month, and I’ve been seeing her ever since. Her great technique and nail art helped me stick to the plan. In addition to making me look more respectable, Tracylee has been doing some very big things. Recently, Dior hired her for a gig at Art Basel, and she wound up in the Wall Street Journal! You can follow Tracylee’s adventures on Twitter via @LuxebyTracyLee.