Recently, I met with gorgeous blogger Kate of The Styley. Kate launched The Styley in March and was looking for some blogging tips. Like a lot of other new bloggers, she wondered if it made sense to start a blog now, when there are so many big bloggers already out there.  In our discussion, I mentioned that fame doesn’t necessarily equal fortune. People are so used to hearing the words “rich” and “famous” together that they think that one of those qualities can’t exist without the other. It’s like one word: “richandfamous.” Not only can you be rich without being famous, but you also can be famous without being rich. 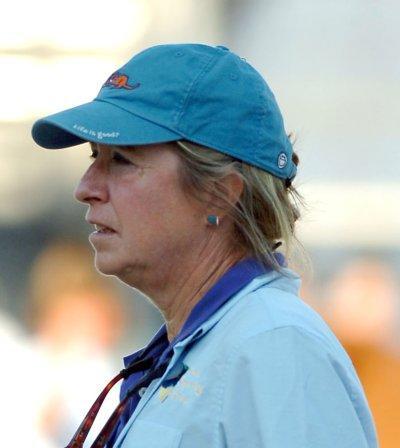 Rich, but not famous to you. Click to find out who she is.

It’s especially easy for random-ass people to fall into the “famous but not rich” category nowadays, thanks to YouTube and reality television. But it’s nothing new in the business world, where it can take 10 or even 20 years for finances to catch up with public perception. I’ve seen plenty of smoke and mirrors in the fashion industry. More than one designer has told me about being broke while his dresses appeared in the pages of Vogue and the Fifth Avenue windows of Bergdorf Goodman in the ’90s. And last year, the New York Times reported that designer-to-the-stars Zac Posen hadn’t turned a profit since he started his business in 2001.

Today, The Wall Street Journal reported that venture capitalists are investing $138 million in luxury-goods discounter Gilt Groupe, giving the e-commerce company a valuation of $1 billion. Here are the first two paragraphs of the article:

“Gilt Groupe Inc. hasn’t made a penny in profit since it was founded in 2007 as an online discounter of hot designer goods like Reem Acra gowns and Rebecca Minkoff handbags.

A recovering economy is drying up the flow of excess goods that supplied Gilt’s inventory during the recession. The company needs heavy investments to turn into an all-purpose luxury retailer. And competition from a flock of high-fashion copycats is getting tougher.”

Surprised? You shouldn’t be. A four-year-old company is still in its start-up period — a time when a business-owner is often spending more than s/he is making.

If you’re thinking this knowledge isn’t relevant to your life, you’re wrong. Have you ever been scared to embark upon something new — whether that’s taking up ice skating late in life, blogging for fun, starting a business, or applying for a job — because you’re intimidated by the perceived success of others? Have you thought, “I’ll never be as big as so-and-so; why even try?” I bet some of you have. And those of you who have had that conversation with me in person have probably heard me say, “Don’t you know so-and-so is dead broke? Put some effort in and you can get attention and lose money too!” Here’s my “fame doesn’t equal fortune” business (and life) advice.

The Bitchtastic Guide to Business™ is on its way to becoming a book. This is y’all’s free nibble. It’s like getting a delicious food sample in a grocery store. Pretend I just gave you a shrimp wrapped in bacon. (If you’re kosher … pretend something else.) Remember how much you enjoyed it and come back for more later. While you’re waiting, you can check out The Styley here.