Superstar hairstylist Julie Matos of the Riccardo Maggiore Salon and I first bonded over our love of the ’80s club/music/fashion scene. Julie’s ’80s-radar went on full alert last month when, while in a Walgreens, she noticed a statuesque, glammed-up blonde. Julie stalked the blonde all over the store till they ended up in the cashier’s line together, at which point she was brave enough to ask, “Are you Dianne Brill?” Dianne said, “Yes!” with a bright smile and was sure she remembered Julie from back in the day. They chit-chatted a bit, with Dianne inquiring politely about Julie’s purchases, which Julie revealed to be decidedly unglamorous toilet paper and tissues. “Very necessary items,” Dianne said wisely, continuing to smile as Julie waved goodbye.

Many of you reading this are probably thinking, “Huh? What? So?” Most of the people Julie knows would think the same. Fortunately, she knows me. I was able to give the appropriate response:

Indeed, Dianne was a New York style icon of the ’80s and ’90s, known for her big blonde hair and va-va-va-voom figure. 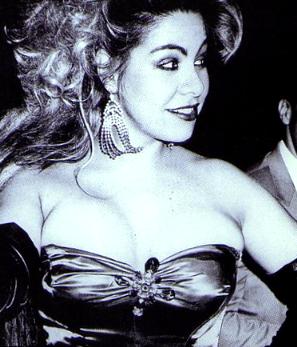 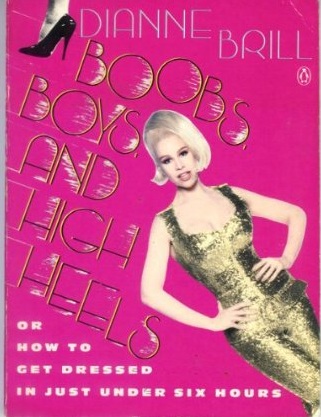 I love the subtitle.

She was initially part of the downtown club scene. Andy Warhol co-directed Dianne and other club denizens in The Cars‘ “Hello Again” video (he appeared in it himself), and referred to Dianne in his diary as “… Dianne Brill with her big tits and hourglass figure.” 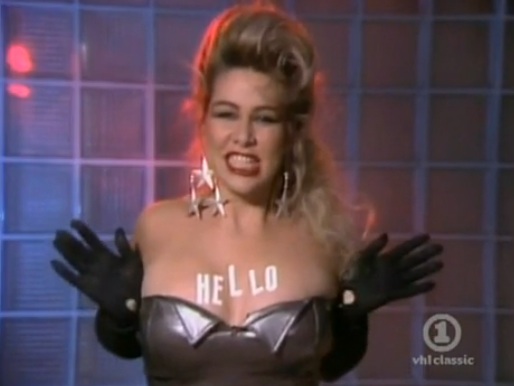 Screen cap from "Hello Again" video by the Cars. Click to watch.

In 1984, New York Magazine, which was always up on the latest It Girl, called her the Queen of the Night. Clothing designer Mary McFadden recommended that the story’s writer, Anthony Haden-Guest, “squeeze Dianne Brill. She has the best tits in town.” (Haden-Guest thought Dianne’s husband looked like he wouldn’t care for that idea.) 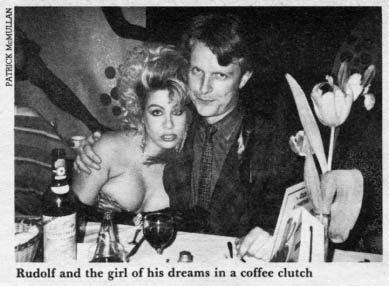 Dianne and hubby in 1984. Photo from Lundissimo. I love that site.

Dianne herself, who designed rubber clothes, described her look to Haden-Guest as  “salon-saloon … a bit Louis XIV and a bit Western.” 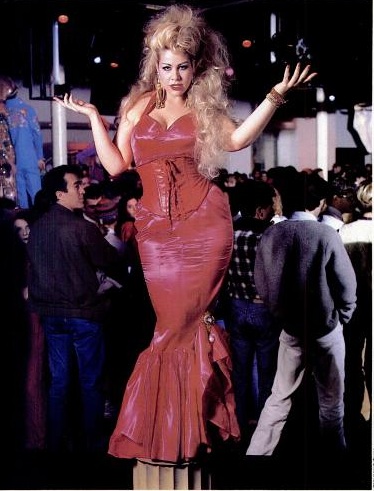 Dianne in her glory, from New York Magazine. 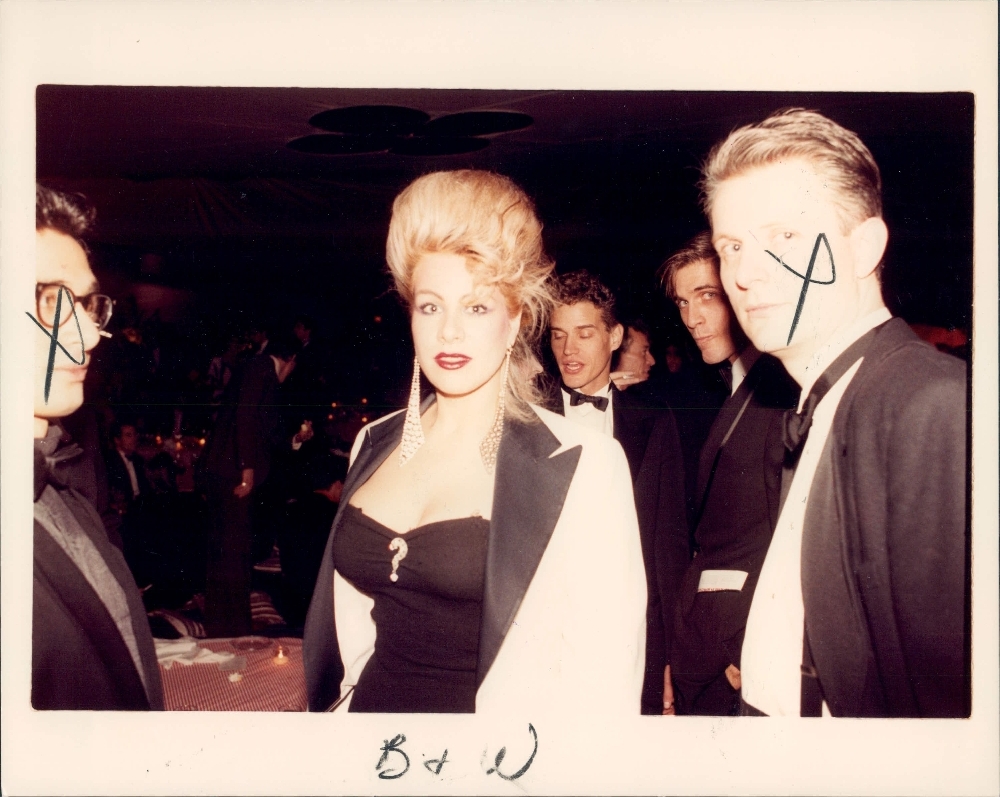 Like New York Magazine, the fashion industry appreciates a good It Girl, and it appreciated Dianne. Mannequin designer Adel Rootstein created a Dianne mannequin with measurements of 40-24-39.

The real Dianne Brill took to the runway. 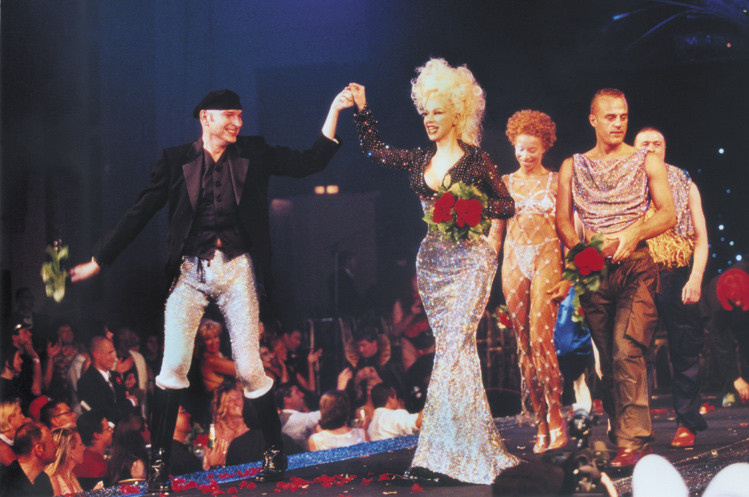 Dianne on the runway, via Mad Haberdasher. Click for source.

She was a muse for designer Thierry Mugler … 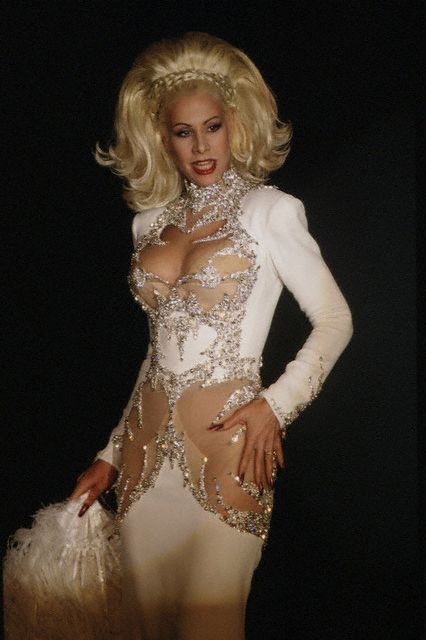 Dianne in Mugler in 1994. The dress's derriere was sheer. Photo via RetroXotique.

… and livened up Jean-Paul Gaultier’s elevated runway in 1988, when she tumbled off the stage, narrowly missing Jack Nicholson’s lap. In her book, Dianne says that when she felt herself wobbling on the edge of the stage, she decided to “go with the jump and control it.” After a triumphant landing on her high heels (“I held my hands over my head — a 9.5 landing, I thought, if this were the Olympics.”) she climbed back up to finish the show.

Dianne is in this Gaultier Spring 1991 video, starting at 11 seconds in.

Eventually, Dianne gave up runway gymnastics and moved to Germany, then Switzerland, with her second husband. They have three kids. 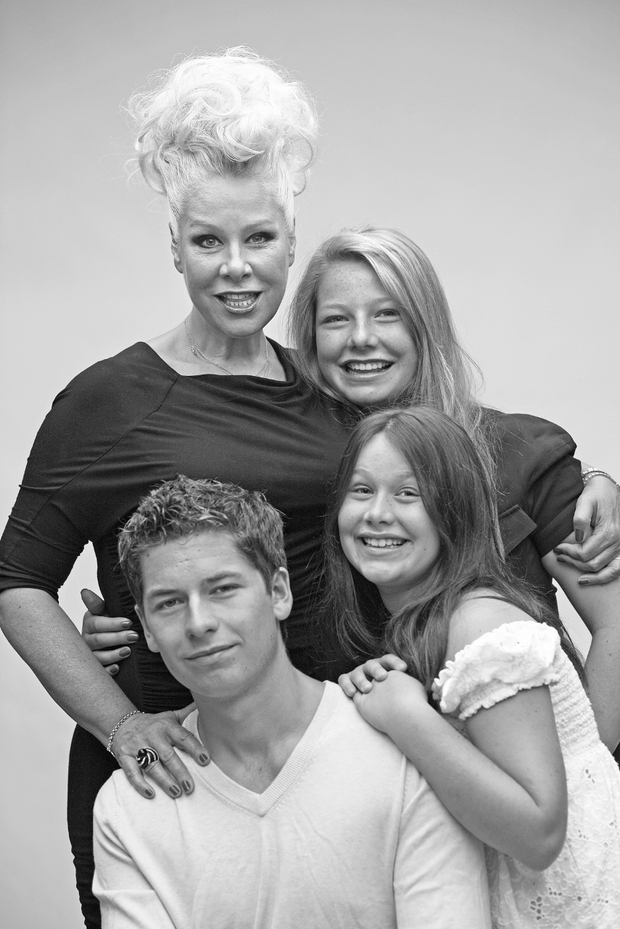 Dianne and kids, via World of Wonder. Click for source.

Dianne also has an eponymous makeup and skincare line with a sex-ay lingerie theme. Lipsticks have names such as Silk Stockings, Thigh-High Nylons and Leopard Brassiere.

And she’s still keeping it glam whether visiting a New York Walgreens or hanging out at home. In a 2004 interview with the New York Observer, she said of her husband, “The first time he ever saw me, I was onstage,” Ms. Brill said of her husband. “So if he starts getting all ‘Why aren’t you doing the dishes?’, I say, ‘The first time you ever saw me was onstage. In a black fishtail dress. O.K .? Don’t talk to me about the dishes.”

That’s my kind of girl!