Bluesy singer Janis Joplin died 40 years ago today from a heroin overdose at the age of 27. In the months before she died, she appeared twice on The Dick Cavett Show: in June 1970 (she teased Dick about his shoes) and August 1970 (Cavett declared he wore his “hip” jacket for her and she shot back, “You DID?”). The tape from her June appearance shows her decked out in classic Janis style: lots of purple, sequins, an armful of bangles, and — my favorite — feather boas in her hair. 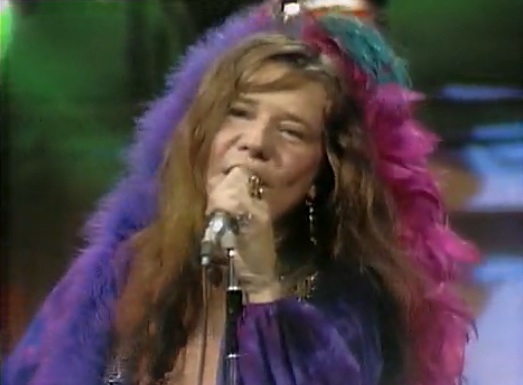 In 1997, Fleetwood Mac singer Stevie Nicks told Booth Moore of the Los Angeles Times that Janis’s “… feathers and her bell-bottomed pants and her beautiful silky blouse tops” inspired her own flowing, “gypsy” style. If you’ve ever felt sheepish for coveting a celebrity’s look, you can console yourself with the fact that, in the early ’70s, Stevie traveled from Los Angeles to San Francisco to shop at Velvet Underground, the store where Janis used to buy her clothes. “Tunic tops that came down to your mid-thigh, and evening gown, old-lady nightgown material bell-bottoms that weren’t really wide, but instead fell straight over a really high boot,” Stevie reminisced. “It was in that room where I thought ‘Wow! These are the kind of clothes I’m going to wear forever.'”

More recently, soul singer Joss Stone — who, as an eight-year-old, used to imitate Joplin to entertain her parents — brought a touch of Janis style back, with her mane of hair, beaded necklaces and hippie-ish bare feet on stage. Joss occasionally is mentioned as a candidate to play Janis in one of the Joplin biopics that are always in the works but never actually made. This year, Amy Adams was cast in the latest maybe-movie, although she’s already eight years older than Janis was when she died. Personally, I’d vote for Joss. Here she is doing a Janis Joplin tribute with Melissa Etheridge at the Grammys in 2005. 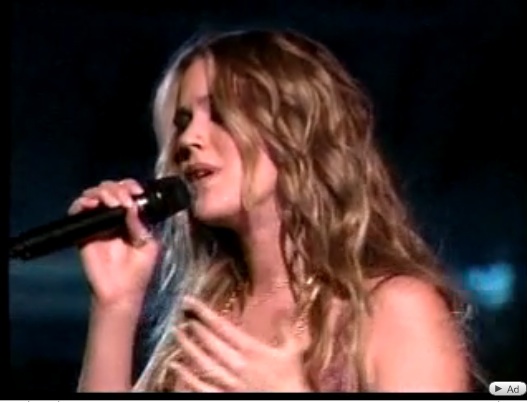 I’m not sure any biopic will live up to 1979’s The Rose (SPOILER COMING), a fictionalized version of Janis’s life, starring a sex-ay, big-haired, big-voiced Bette Midler in her Oscar-nominated movie debut as a self-destructive rock star. (I’M WARNING YOU, A SPOILER IS COMING!) The Rose is one of those movies you love even though you shouldn’t. When I saw it again on television recently, I was simultaneously laughing and crying at the end when (HERE’S THE SPOILER) Rose dies on stage. It’s highlarious, but I still get emotional. 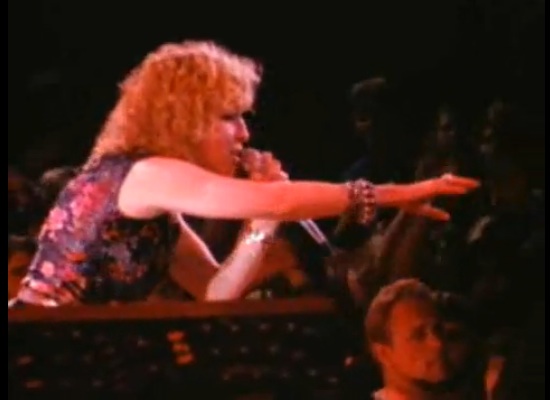 Click Bette to watch the trailer for The Rose.

I discovered Janis in middle school, when I found the 1973 Joplin biography Buried Alive in the school library’s biography section. (My interest in women’s lives, which influences nearly all of my jewelry designs, goes way, way back.) I wish I knew which naughty librarian allowed this on the shelf! The book, by Janis’s publicist Myra Friedman, introduced me to sex, drugs and rock ‘n’ roll. I was too innocent to understand the sex and drug parts, which means I didn’t understand 99% of the book, but I was fascinated by the bullied-fat-girl-to-fabulous-rock-star-to-tragic-figure trajectory of Janis’s life. As soon as I finished it, I started it again. Other biographies are Scars of Sweet Paradise by Alice Echols and Love, Janis by Janis’s younger sister Laura. Love, Janis was turned into a musical and if you ever have a chance to see it, go. I saw it twice in New York in 2001 and by the end of both performances, the audience was screaming like Janis was really in the room.

Laura and her brother Michael have had a tough time managing Janis’s musical legacy and image, according to a recent story in the New York Times. The 27-year-old dead male rock stars of Janis’s era have gotten all the posthumous glory. Hopefully that will change, now that the Joplin family has hired a business manager for Janis’s estate.  In the meantime, here are a few more Janis performances. Promise me that you’ll find an excuse someday to put feathers in your hair and all the purple you own on your body and go out in the world looking, as the Times said last week about Janis, “like God’s idea of a rock star.”

You might also like
Alec Baldwin Is Going to Think I'm a Thoughtless Little Pig
Thank You, Levi Johnston's Penis!
Minx by Tracylee Percival, Medici Poison Ring by WendyB
Previous Post: « What Wendy Wore: Suited Up for a Square Meal
Next Post: Fashion Repeats Itself: Trashy Couture »