Warning:  If Oscar-winning actor Jamie Foxx and the prime minister of Malaysia are dancing on stage together, move aside quickly. Ladies in pink head scarves will cut a bitch who gets in the way of their picture-taking.

I learned this the hard way on Friday at a dinner at The St. Regis hotel in honor of the first lady of Malaysia, or, as I call her for short, “Her Excellency Datin Paduka Seri Rosmah Mansor.” She was receiving the “International Peace and Harmony Inaugural Award 2010.” I accepted an invitation from my Malaysian designer friend Zang Toi, who was presenting a few gowns during the cocktail hour. It was only the day before the event that I took another look at the invitation and realized the gown presentation came during an “Islamic Fashion Festival.” Normally I don’t like to mix religion and fashion. I wouldn’t knowingly accept an invitation to an Islamic, Catholic, Protestant, Jewish, Amish, Quaker, Buddhist, Hindu or Eastern Orthodox Fashion Festival. I’d even skip the Agnostic and Atheist Fashion Festivals. I would, however, go to a Yearning for Zion Ranch Polygamist Fashion Festival. Who wouldn’t? 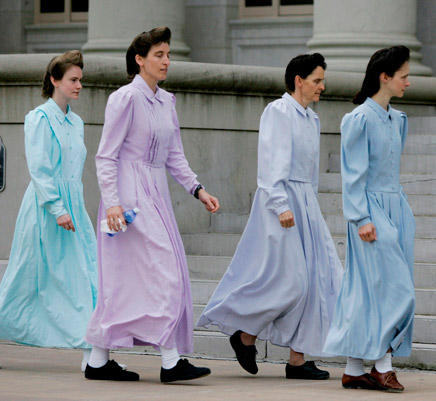 Having accepted the invitation, off I went, hoping alcohol would be served and that the Zang gown I was wearing wasn’t too revealing. I wound up clutching a glass of Champagne in a mixed-fashion crowd, while several designers sent out models who were covered from head to toe. In one case, the models’ faces were obscured with Lady-Gaga-in-Alexander-McQueen lace. 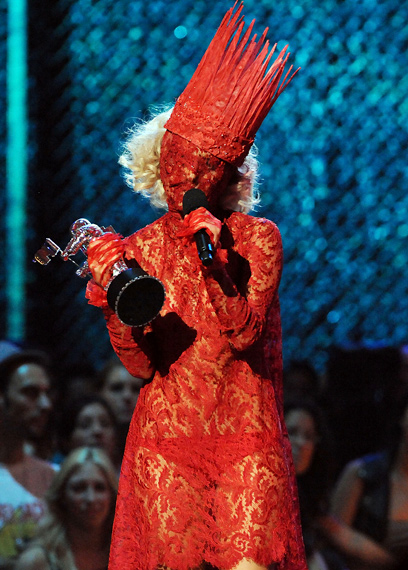 Zang’s work is often very sex-ay, but he covered up for the evening. 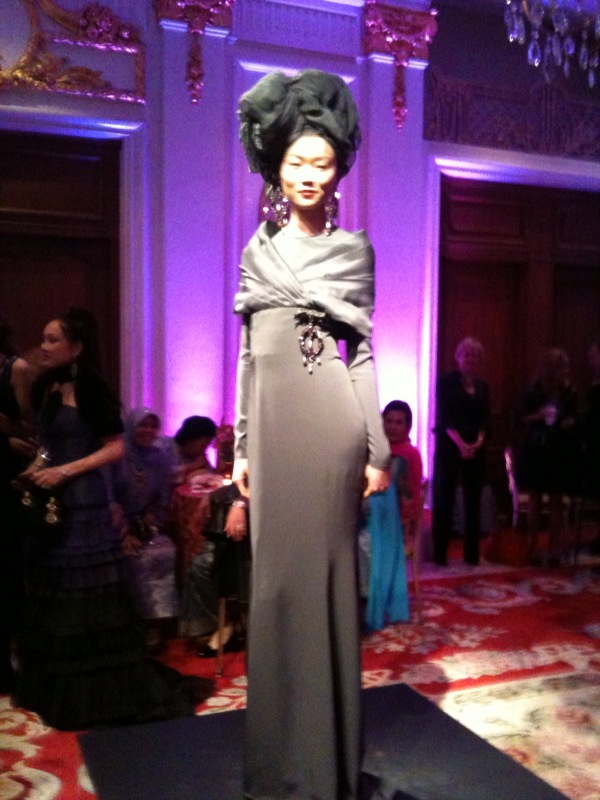 Zang Toi's model at the event. Sorry about the iPhone photo quality.

The head coverings on the slinky models reminded me of the time in high school when I draped a chiffon scarf over my head and slinked around the house, eventually passing my mother, who was on the phone. She paused in her conversation to note, “Here comes Wendy with a schmatte on her head.” I took off the scarf and slunk away.

After cocktails, we went in for dinner, where I was seated with a table of complete strangers. I’ve gotten used to this over the course of many charity awards dinners, so I set about making new friends. Most awards dinners in New York hotel ballrooms are held on weekdays and follow this pattern:

These dinners are about networking, so the opportunity to have conversation is important. Music is kept to a minimum, unlike at weddings, bar/bat mitzvahs, Sweet 16s, quinceaneras and other family events, where the guest list inevitably includes that drunk uncle who bellows, “You’re all grown up!” while ogling teenagers’ breasts. At those family events, you don’t want your other guests to talk to the drunk uncle, who will likely be punched out or arrested if anyone realizes what he’s saying, so you have lots of loud music. If people aren’t eating, they should be dancing. If they’re not eating or dancing, they should be saying, “What? What?” to their seatmates.

Much to my surprise, the Malaysian event wasn’t a typical awards dinner. It was like a wedding, bar/bat mitzvah, Sweet 16 and quinceanera all rolled up into one. I was awestruck. Jamie Foxx was the host and fully deserves an all-expenses-paid trip to Malaysia for his hard work. The music included the always-excellent Boys Choir of Harlem (who all looked like they were in their mid-30s, as Jamie pointed out, calling them the “Boys-to-Men Choir”); pop star Leona Lewis; and more traditional wedding-type singers. 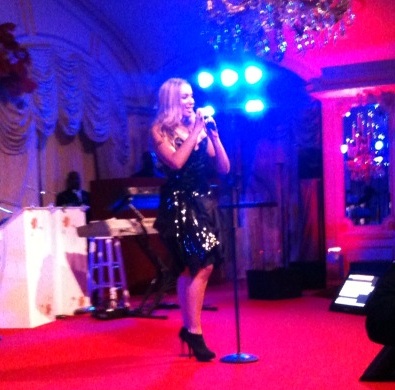 Security scolded me for taking this iPhone picture of Leona Lewis.

When the magic hour of 10 P.M. rolled around, and we hadn’t even been served an entree, I decided to throw caution to the wind and stay. Good thing I did because Jamie Foxx was THE emcee of all time, managing to:

And I did! I put my hands in the air like I just didn’t care! I’m a good multitasker, so while all this was going on, I was still able to ponder to whom I should write to guarantee that Jamie emcee all future Academy Awards broadcasts and every late-night chat show. After dinner, we trooped to the after-party but I left before the karaoke screens got any use. I bet people are still there singing.

Sadly, MrB was traveling and missed this. He would have loved it even more than I did. Plus, he was unavailable to take my outfit picture. I don’t have a tripod, but I balanced my camera on a piece of furniture and took a picture of most of me. 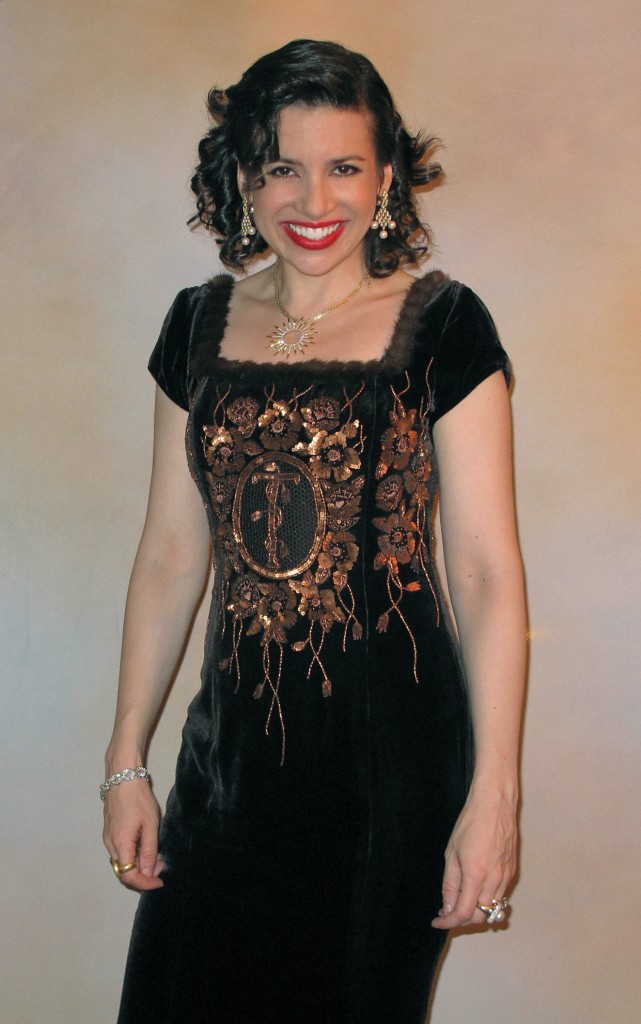 I worried that this wouldn’t be considered a proper outfit post because I didn’t take a picture of my shoes, which were the gold Louis Vuittons I wear with everything. But that turned out to be for the best, because I don’t have very nice feet. It’s true! After seeing a photo of my foot in my Miu Miu clogs with the daisy pattern, gorgeous 19-year-old Swedish/Chinese blogger Stephanie decided to get Miu Miu clogs with the swallow print instead. My feet gave her a bad feeling about the daisies. Or, as she put it, “Ok after seeing photos of the daisy clog here I think maybe the gold swallows are on top

:D:D:D:” I was briefly dismayed that my foot-modeling career ended before it even began, but I’ll always have my hand-modeling career. Don’t cry for me, Malaysia!