I didn’t get a chance to post this yesterday, so here is the sleeveless turtleneck I was wearing on 9/11/01, when I worked in the World Financial Center, across the street from the World Trade Center. 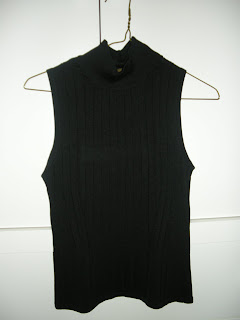 I didn’t keep it as a memento. I just wear clothes for a really long time. I did get rid of the black Stuart Weitzman shoes and gray Katayone Adeli pants I was wearing. I felt hostile towards the pumps after walking a long way in them that day. I had never been crazy about them in the first place because they were very conservative and banker-boring. As for the pants, I decided that they didn’t fit right.

In September 2001, I was working with a woman named Mel who hated sleeveless turtlenecks. She said they didn’t make sense: “You’re hot AND you’re cold!” Anyway, she was the person I took with me when I left the building. I had two employees who worked on my floor: AnneMarie, who was at a doctor’s appointment; and Randi. When I decided to leave after the second plane hit — there was no evacuation order at that point — I couldn’t find Randi anywhere so I thought she must have left already. (She hadn’t. AnneMarie and I totally stressed over her for a couple of hours, but Randi was fine.) Mel worked on another floor. I called her and told her to meet me downstairs. She brought another woman, who was in hysterics because she had been looking out the window and had seen the second plane hit the tower.

For a while, we three milled around outside with hundreds of other people, not sure what to do, all looking at the trade center. We started seeing people deliberately jump out of the towers, though I couldn’t admit that to anyone for days. I was telling myself and anyone who would listen that those people were already dead and had just fallen out the gaping hole in the building.

Before I left the building, I had emailed a colleague in London to let him know something had happened and asked him to tell me the news. Luckily, my Blackberry* was working because no cell phones were. My colleague emailed me that more planes could be coming so we should start walking uptown, away from the trade center. Thanks to him, we were quite far away when the buildings fell down and we didn’t get caught in the clouds of debris. While we were walking he emailed me again to tell me the Pentagon had been hit and my emailed reply was, “Don’t joke with me right now, I’m having a bad fucking day.” That’s denial, people! I really didn’t believe him, but why would he joke about such a thing?

One thing you can always joke about, even in a crisis, is a sleeveless turtleneck. As we were trudging uptown, with mayhem all around us on a warm, late-summer day, Mel and I had this conversation.