My everyday essentials are red lipstick, heels (or high wedges) and jewelry. For the past year or so, my favorite lipstick has been MAC’s Pro Longwear Lipcolor in Lasting Lust. It is the!perfect!red! I recommended it to La Belette Rouge, who got it and took a picture of it sitting right in the middle of her makeup collection. 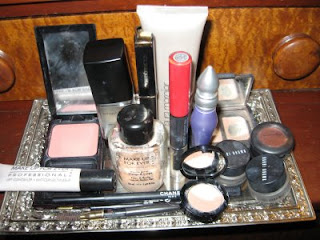 It goes on like a gloss but it’s matte and very, very dry. After you apply the color, you flip the tube and apply a clear gloss to alleviate the Sahara-like dryness. I was introduced to this color by a makeup artist the night I wore this red Versace dress. 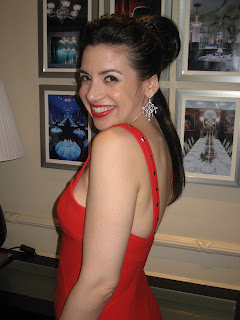 The makeup artist told me this stuff would last, but she didn’t tell me it would last till an oily makeup remover was used on it or the world ended, whichever came first. I nearly scrubbed my lips off that first night and the color didn’t budge. I don’t know if MAC puts extra lead in it or what, but I love it. I wear a similar product by Kimara Ahnert in Berry Freeze; it’s a deep color that’s not as bright as the MAC. I can’t find it on their site, but you can probably call them. Trish McEvoy’s Sheer Mulberry is similar to the Berry Freeze. I’m wearing one of them in this photo. 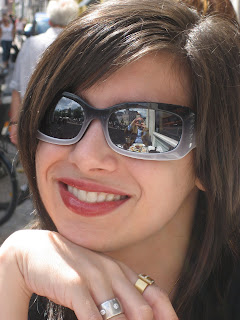 I used to use a lot of other bright reds, but I’m so happy with the MAC that I rarely take them out anymore.

Here are the very important shoes. I took the picture on the kitchen floor and when Gigi the dog saw them she started growling. Good to know she can protect me from an invasion of a shoe army. 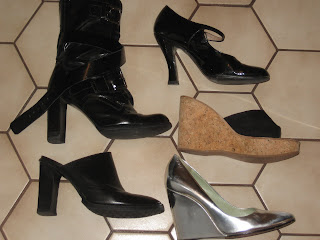 Starting from the boot and working clockwise: The strappy boot is by Celine. I got it years ago. Last year, I wore it almost every day in the winter. The Mary Jane is the first Prada shoe I ever got. I mention that pair here. After more than a decade of frequent wear, the patent leather is finally starting to crack. Darn. Under that is a representative of the K. Jacques cork wedges I’ve worn every day for the past two summers. The silver wedge is by Prada. It’s not a basic, but someone asked for a photo of it recently, so I threw it in. The Michael Kors clog is old, but not as old as the Mary Jane. Under jeans, it looks like a boot and it’s good for slipping off in the airport. It needed emergency surgery last summer, after a heel got mangled by a cobblestone in Stockholm.

I forgot to put these Helmut Lang boots in the group photo. 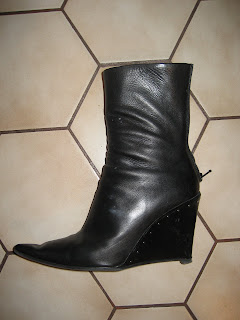 I’ve had them for years, but I became fanatical about them this winter and wear them nearly every day.

I only wear my own jewelry designs. I wear certain pieces a lot for a few months, then I’ll switch to new designs. These were the pieces I was wearing frequently in November. I’m still wearing the Isabella Necklace and the Diana Ring. I just got the Queen Min Ring finished, so that’s a new favorite. The Lady Jane Necklace is also new and getting a fair amount of wear. Of course, this is a good time to show off the Boleyn Necklace, and lately I’ve revived my Juana Peekaboo Skull Ring.

I have a necklace coming that I’m really psyched about. Gorgeous client Melissa knows which one that is because she bought my sample, but I’m not ready to reveal it. That one will be part of a big Book Club post, so it’s going to be a while.

This post has gotten very long, so I will describe everything I wear in between the shoes and the lipstick another day. Sorry, K-Line!

You might also like
Wendy Brandes Jewelry on National Jeweler
Pink Elephants for Fashion Week ... and Maneaters
What Wendy Wore: Out and About in Los Angeles
Previous Post: « Anne Boleyn for Dummies
Next Post: Where the Hell Is This Sonia Rykiel? »