Thanks to writer Anne Thériault for retweeting this PBS clip of swamp rabbits a-swimming.

Swamp rabbits are shy creatures. This is the first time they've ever been filmed swimming. #NaturePBS pic.twitter.com/WZkdNcczlu

This clip took me back to August 1979, when Jimmy Carter was two years into his presidency. America had already been shaken by the decade’s second big energy crisis and the Iranian Revolution. By the end of ’79, the Soviet invasion of Afghanistan and the Iran hostage crisis would further destabilize the U.S. and the world in general. But in between disasters, President Carter’s close encounter with a bunny of the swimming kind was fodder for the three national news broadcasts, the morning newspapers, and the afternoon newspapers. Coming just four years after the release of Monty Python and the Holy Grail, the animal in question was, of course, declared to be a “killer rabbit.” Unfortunately for Carter, the gibes about the incident were worse than a French taunting: A president who was menaced by a rabbit was seen as unmanly. Today, re-reading the Associated Press story that was picked up by the New York Times and other media outlets, I’m saddened, but not surprised, that our culture of toxic masculinity turned this delightful anecdote into a bad hare day for the ages.

WASHINGTON, Aug. 29 (AP) — A “killer rabbit” penetrated Secret Service security and attacked President Carter on a recent trip to Plains, Ga., according to White House staff members who said that the President beat back the animal with a canoe paddle.

The rabbit, which the President later guessed was fleeing in panic from some predator, reportedly swam toward a canoe from which Mr. Carter was fishing in a pond. It was said to have been hissing menacingly, its teeth flashing and its nostrils flared, and making straight for the President.

Mr. Carter was not injured, and reports are unclear about what became of the rabbit. But a White House staff photographer made a picture of the attack and the President’s successful self‐defense. This was fortunate because some of the President’s closest staff members reportedly refused to believe the story when Mr. Carter told them about the attack later.

Mr. Carter, said to be stung by this skepticism in his inner circle, ordered a print of the photograph to offer as proof. But this was not good enough.

“You could see him in the canoe with his paddle raised, and you could see something in the water,” said the doubter. “But you couldn’t tell what it was. It could have been anything.”

So Mr. Carter ordered an enlargement. “It was a rabbit, all right,” the staff member said after seeing the blown‐up photo.

Another staff member who saw the picture agreed. “It was a killer rabbit,” this staff member said. “The President was swinging for his life.”

No news photographers were allowed within camera range of Mr. Carter on the fishing trip, which was made on April 20. And the White House declined to make public any photographs of the encounter with the rabbit. “There are just certain stories about the President that must forever remain shrouded in mystery,” Rex Granum, the deputy White House press secretary, said today.

How big a story was this? Nineteen years later — while the world was in a frenzy over Bill Clinton’s sexual behavior — the funny bunny was cited by the Washington Post in a list of past media whirlwinds. Political analyst and University of Virginia government professor Larry J. Sabato, the author of Feeding Frenzy: How Attack Journalism Has Transformed American Politics, described how the incident was part of optics that led to Carter being a one-term president, losing to Ronald Reagan the following year.

“While home fishing in Georgia during a summer when his popularity was at low tide, President Jimmy Carter’s small boat was ‘attacked’ by a mysterious swimming rabbit, which the president warded off with a paddle. Once leaked into print by Brooks Jackson of the Associated Press, the bizarre story captured the press’s and the public’s imagination, becoming a metaphor for Carter’s hapless, enfeebled presidency. The incident encouraged Massachusetts Sen. Edward M. Kennedy’s primary challenge to Carter’s renomination, and it became a symbolic preamble to Carter’s landslide loss in November 1980.”

The Washington Post, by the way, was fully part of the original “feeding frenzy” with this headline. 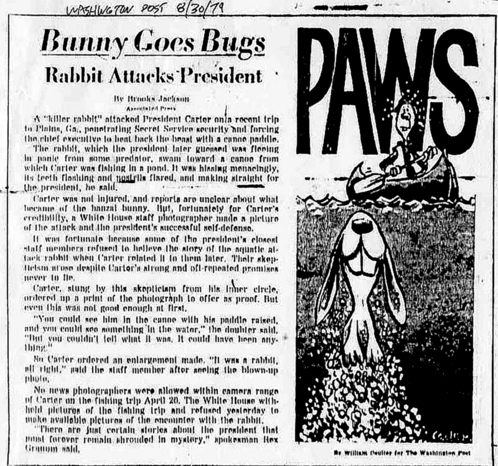 Fast forward to 2010, Carter — then in his mid-80s — had to answer for the rabbit yet again on CNN’s “Reliable Sources.” I have no idea if this was the first time Carter burrowed into his trusted press secretary Jody Powell’s role in all of it; Powell had died the previous year. Carter said, “Well, the basic story was true that Jody Powell told, but I don’t know what Jody told in the middle of the night in a bar after a lot of drinking had been going on.”

I have some strong feelings about Carter’s bun-gled presidency. From a purely personal furspective, I was similarly told that “monkeys don’t swim” shortly after I watched a monkey swim laps in a pool in 2013. In my case, technological advances in photography and a digital camera not only had the skeptics begging my pardon, but also begging for a swimming monkey image for their Facebook page. 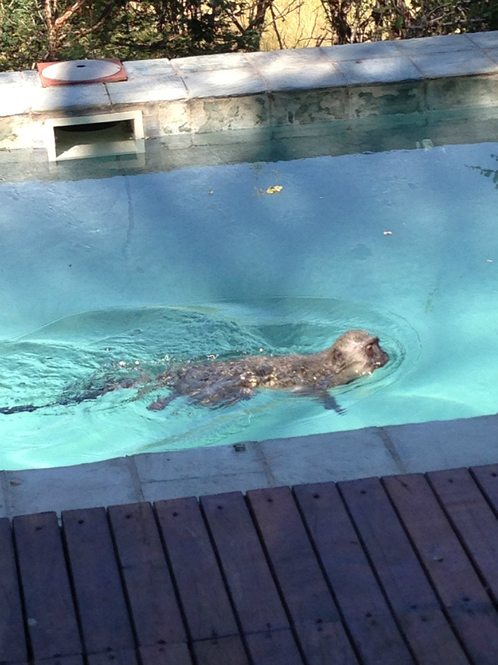 This monkey swam three separate laps so try to tell me it “fell in.”

I could go down the rabbit hole of the decades of frenzied, sexist, infotainment-oriented media coverage that led us to where we are today with the presidency — starting with the myth of Carter’s more “manly” successor, Reagan, simply frowning in Iran’s general direction to free the hostages — but why make the effort when this 2016 Hollywood Reporter headline about former CBS chief executive/sexual harasser Les Moonves says it all? 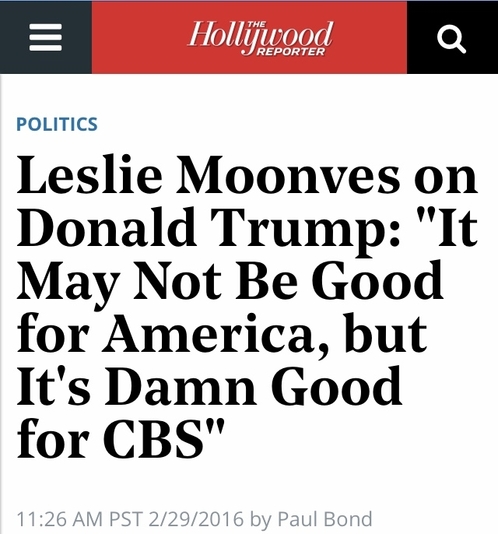 But instead I’m going to keep sitting here, literally shaking my head, as I reflect on how we went from being appalled by a bunny splasher to normalizing a pussy grabber — with the latter now responsible for the death of thousands of Americans due to his malignant narcissism, authoritarianism, greed, and ineptitude. In case you missed the stories on how the Trump administration genuinely bungled its handling of the coronavirus over the past few months, you can catch up here:

Give me a swamp rabbit any day over this misery.