Despite what you may read or hear, it is morally right and MEANINGFUL to speak out against a ruling party that commits crimes and undermines democracy. Any “backlash” talk is designed to keep you passive, even though there is ample historical evidence that appeasement is a failing strategy. 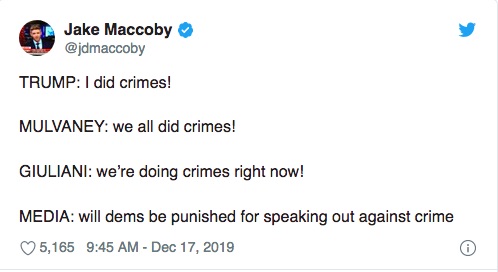 That doesn’t mean that fighting back is a simple (or safe) thing to do, but it never has been! Right now, the status quo is doing its best to discourage hope and action by minimizing our big modern-day successes, like 2018’s Blue Wave, which made the House impeachment hearings possible in the first place.

And historical amnesia fools us into thinking that nothing we do today can match the successful protest actions of other decades. You can learn the truth from L.A. Kauffman, the author of Direct Action: Protest and the Reinvention of American Radicalism and How to Read a Protest: The Art of Organizing and Resisting. I got the books and it is eye-opening to read the backstory of the iconic 1963 civil-rights march on Washington. Hindsight being 20/20, it’s easy to be lulled into thinking that that protest was somehow guaranteed to be a success, or that there was no division or in-fighting or criticism during the organization of it. Kauffman has the facts that prove otherwise.

But even more relevant to today’s Impeach and Remove marches (now numbering more than 600 all across the nation) is Kauffman’s research on the protests against Nixon, as shared in a recent Twitter thread. For those of you who don’t use Twitter, I’m going to copy and paste all the tweets into this post. Here’s the intro to the thread; after that, just read through the bullet points. Each one represents a tweet by L.A. Kauffman. You can click the links within the bullet-pointed text to see images even if you don’t have a Twitter account. (Seriously, MrB, CLICK THE LINKS before you ask for help.) 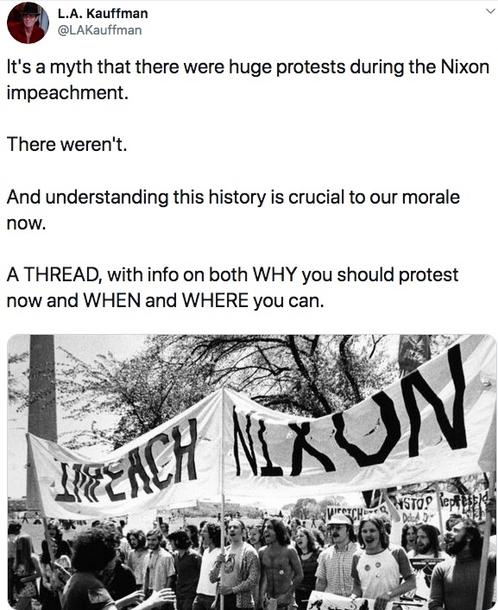 So that’s the Nixon-related history. The bullet points below are L.A. Kauffman’s tweeted advice for our current situation.

And one more Kauffman tweet about the Nixon protests:

For a sense of the modest scale of the Watergate-era impeachment protests, here’s video footage from the White House, after Nixon fired the special prosecutor in October 1973:

And that’s concludes my copy-paste of L.A. Kauffman’s direct tweets. Here’s my own paraphrased TL;DR of all of the above: Protests don’t magically, immediately change Senators’ votes but they will help set a different tone for the Senate impeachment trial . The fact that we remember the Nixon impeachment process as having been marked by steady protests is a sign that even small actions matter. More people protested during the first 18 months of Trump’s presidency than at any period in US history — even the height of the Vietnam antiwar movement. Do your part!

Can’t march because you can’t escape your job or other responsibilities, or you’re not physically able to? That’s fine, because I’ve got other options for you.

Now go forth — or stay on your phone — and fight for human rights, rule of law, and common decency!