On Saturday, I shepherded a group of Indivisible Upper East Side members downtown to the Families Belong Together march to protest the separation of refugee children from their parents.

We walked across the beautiful Brooklyn Bridge …

… and got tons of support from people driving by. This was a relatively quiet moment!

I was back in Brooklyn today for a town hall with Senator Chuck Schumer. Members of Indivisible chapters had been lobbying for this town hall for nearly a year. We were excited that our elected official was finally going to meet with us in person. Too bad Chuck didn’t show! He pleaded plane problems.

No one believed him. In fact, it was considered quite possible that he would stand us up, so there was a whole plan in place for that, which included a cardboard Chuck Schumer as a centerpiece.

Good thing someone brought a cardboard cutout of @chuckschumer to the town hall since he cancelled on us at the last minute. Plane trouble? Not sure I believe that. We’ve been trying to get a town hall for a year. @indivisibleteam #indivisible #indivisibleues #whatsupchuck

Cardboard Chuck made it onto Rachel Maddow’s show.

Happy the #indivisible leaders and cardboard @chuckschumer made it onto #rachelmaddow … but would have been much much happier if Chuck had made it to his own town hall. #whipthevote #whatsupchuck #youworkforus Thank you @terricribb for the video!

The chief Metro political correspondent from the New York Times was there to witness the debacle.

SCHUMER is not at what was supposed to be his first town hall of 2018 in Brooklyn. Plane trouble in upstate, apparently.

There is no AC and people aren’t happy. It’s probably 90 degrees in here. pic.twitter.com/qZikihkugq

I can assure you that, as soon as I’m done with this post, I will be using Resistbot to let Schumer know how exactly how I feel about his no-show. If you haven’t used Resistbot yet, you should! It’s an easy, free tool that works 24/7, anywhere in the country, and it will let you send messages to your elected officials (senators, representative, and governor) in under two minutes. Just text the word RESIST to the number 50409. The first time you do it, you’ll have to fill out some information about who you are and wear you live so that the bot can give you the right officials for your location and sign your name to your letter. After that is out of the way, you can Resistbot on the train, at the gym, while walking the dog, while drinking — the latter is my favorite. I love to drunk-text Chuck after a couple of glasses of rosé! I try to Resistbot at least one of my officials every day, and you should too.

After you do a Resistbot tomorrow, I invite you to join me in filing a complaint against Judge Jack Weil, assistant chief immigration judge for the U.S. Department of Justice. He’s the guy who thinks it is okay for three-year-old refugee children to represent themselves in court without the aid of counsel. (He’s claimed his words were taken out of context but hasn’t explained how.)

Here’s how you can file a complaint about the conduct of an immigration judge. 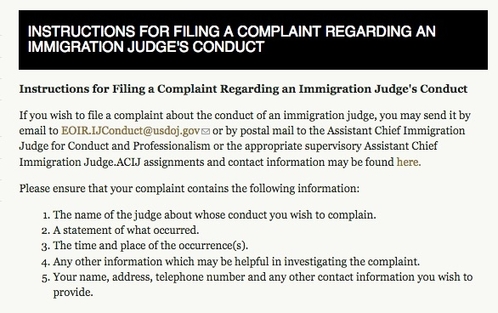 I wouldn’t want to be in court without a lawyer, and what toddler even knows what a “court” or “lawyer” is? Even the three-year-olds who are lucky enough to get representation tend to act like, well, three-year-olds during these all-important hearings. Tell Jack Weil what you think of his ridiculous opinion!