This tweet by Lauren Duca — a smart, funny, and definitely young journalist — made me laugh out loud today.

Happy Valentine's Day Eve! I just want everyone to know that one time in college I tried to search for my crush on Facebook, accidentally made his name my status, and then my phone died.

It also made me extra-thankful that I grew up without social media. I’m sure that I would have loved the opportunity to chat with Duran Duran fans all over the world in the mid-1980s, but in every other aspect, social media seems like pure hell during those awkward years. I’m not even talking about the rampant online bullying — just the profusion of photos and ways to share them freak me out. Remember, in the pre-digital age, when we used real film in our cameras, there were limits. You’d buy a roll with 24 frames or one with 36, depending on how much money you had to spend. If you were on a big vacation, you couldn’t waste a frame. When I went to England for the first time in 1983, I swear I used advanced math skills to figure out how many pictures I could take while saving film for the Tower of London at the end. 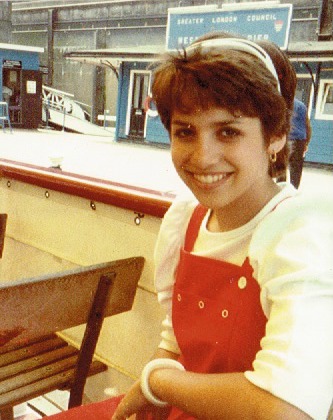 Then there was the expense of developing the photos. We even kept a lot of the duds — subjects’ eyes closed, partial thumb eclipses — after developing because we didn’t have many options to choose from. So who could afford to take eleventy-billion photos of a cat sleeping in a sink? No one!

Now even nonprofessionals can take as many cat photos as they like, while professional photographers have fast cameras, enormous storage, and the ability to review pictures on the spot rather than waiting for negatives to be produced and prints developed. On top of that, with everyone able to blast a photo to the world within seconds, I think I would have literally died of embarrassment if the technology had become available before or during my school years. Even now, I don’t know how to feel about the fact that every single one of us will someday make headline news for getting caught in the same frame as Beyoncé with an appropriately awed expression on our faces. (Yes, it is a scientific fact that Beyoncé will eventually slay us all, photographically speaking.)

That’s a long way of saying that I am kind of shocked and appalled when I see candid photos of myself — especially the ones in which I’m wearing reading glasses — but it’s become increasingly obvious that that I must reach a place of acceptance when it comes to this issue. I just wanted to get my statement of displeasure on the record first. Now that that’s done, I will acknowledge that I knew the lovely Kathryn M. Sheldon of @resistancephoto was taking pictures at last week’s meeting of my local Indivisible chapter. She had asked permission. Yet, somehow I was still startled, then a bit amused, by this photo. 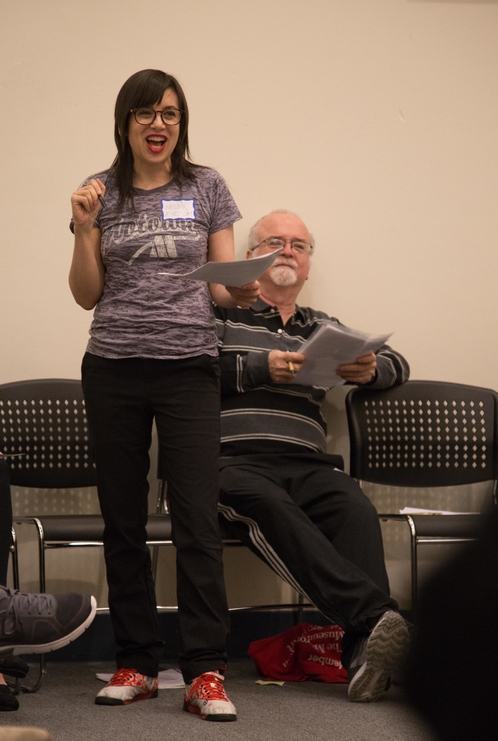 Judging from the expression on my face, that was probably the moment in which I was telling 50 people that I like to drunk-text New York Senator Chuck Schumer in the middle of the night by using ResistBot. If you’re new to the world of activism, ResistBot makes contacting your own elected officials ridiculously easy. Text the word “RESIST” to 50409, and the bot will talk you through it. You can use ResistBot anywhere in the country, 24/7, drunk/sober, at home/stuck on a train, watching CNN/reading the New York Times. (Don’t resist while driving though!) It gets attention, too! I’ve gotten more hard-copy, snail-mail responses to my ResistBot messages than I’ve gotten from emails and letters to my senators/representative/governor. It might be that I’m more passionate in my ResistBot messages because they’re so spontaneous. Or it could be because of white wine. Who knows and who cares? Use it. Use it every day and tell the people you elect and PAY exactly how you feel about our current government.

Separately, Kathryn’s photo made me realize that the Indivisible members must think I’m a huge fan of athleisure. Most of them have only ever seen me in a version of that outfit: Random black workout pants, my old Keith Haring-print Reebok sneakers, and a different t-shirt each week. It’s usually a concert t-shirt. (After one meeting, a guy came up to me and said, “You’re wearing Madonna this week. Last week was Lady Gaga, and there was a skull before that.” Hmmm. Attentive ally or GOP spy?) The truth is that I often go to the gym right after the meeting, and I’m dressed for it. While I happily wear a sloppier version of that same outfit around the house and anywhere in the magic “zone of invisibility” in my neighborhood (where you pretend no one can see you so you don’t brush your hair or teeth), I have always avoided wearing gym clothes “in public” (aka outside the zone of invisibility). Based on the photographic evidence, that has changed.

I’ve always avoided public speaking as well, but that too has changed. When the world is having an emergency, anything is possible! 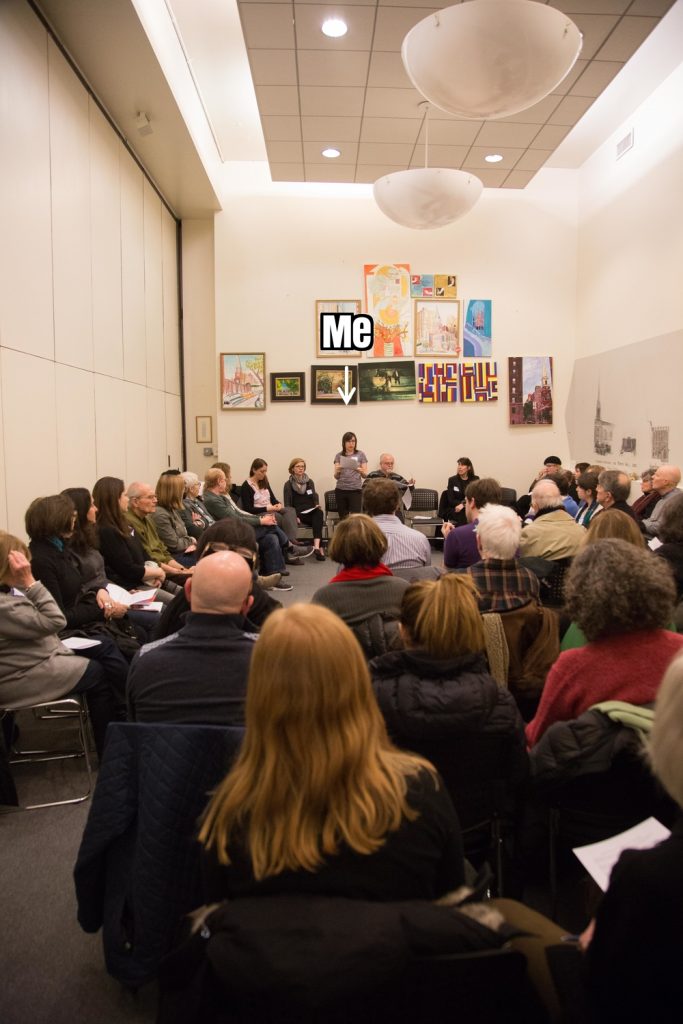 If you’d like more information about ResistBot and other real things you can use or do to make a difference, get the weekly action newsletter that I write by joining as a member here. Many event listings are specific to New York City and/or State, but there are other actions that might apply to you or, perhaps, inspire you to do your own newsletter or get involved in a resistance group where you live. If you’re looking for suggestions about organizations to join, ask in the comments. I’m happy to help.

You might also like
Pining for Pimm's at Harrods
Zang Toi, Jill Abramson, and the Jewel of the Month
Living High on the iHog ... in Latex
Previous Post: « Music on My Mind: Halftime and the Grammys
Next Post: Wednesday’s Video: Behind the Scenes on YouTube »