I collect a lot of things — vintage clothes, squish-faced animals, dust — but baseball caps are not on the list. I’m not very sporty, to say the least. In fact, I can’t remember ever noticing a baseball cap until late last year, when I saw a guy wearing a snapback embroidered with the word “FACTS.” 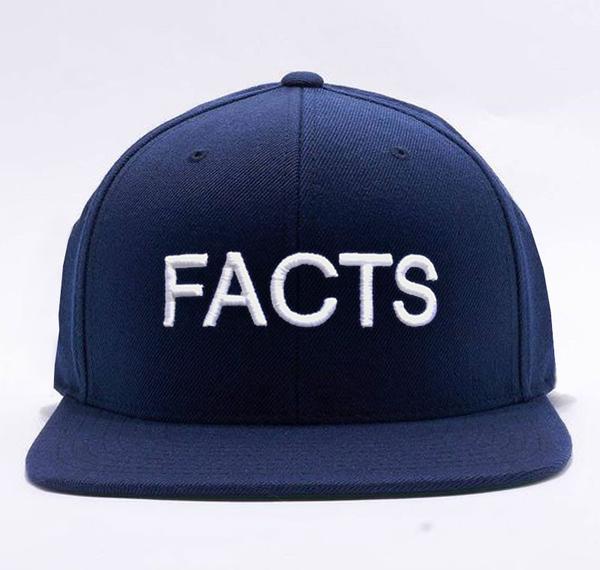 Being a big fan of facts, I had to ask where he got it. The guy — Oliver — started explaining that he was involved with the hat project and that 20% of the profit from each hat go to the Committee to Protect Journalists and I was like …

… because I’ve been involved with CPJ for many years.

After quizzing him somewhat suspiciously about who he was in touch with at CPJ (sorry, Oliver), I declared, “I need to get this hat for all my journalist friends!” Oliver kindly offered to send me some instead. That’s how a baseball cap inspired this week’s video, in which I discuss three nonprofit journalism-related organizations: CPJ, ProPublica, and The Trace. And, yes, I wear an actual BASEBALL CAP throughout the whole video. Maybe I’ll start wearing baseball caps all the time now. Who knows? Like I always say, “Never Is the Next New Thing™.”

In addition to CPJ, ProPublica is especially near and dear to me because MrB was its founding editor. I keep a close eye on its work, and, in my video, I highlight ProPublica’s investigative series on the 700 to 900 annual pregnancy-related, childbirth-related, and post-childbirth deaths in the U.S. — the highest maternal mortality rate in the developed world. Those stories made a big impact on me, even though I’ve never had children, because I’m very familiar with the second-class care that women can be subject to in the medical realm.

Now I feel like examples of maternal crises are everywhere. In December — just weeks after ProPublica reported that black mothers are three to four times more likely to die than white mothers — activist Erica Garner died of a heart attack at 27. She had a previous heart attack shortly after giving birth to a son four months earlier. Doctors said the pregnancy had stressed an already enlarged heart, a condition no one knew about.

Even more recently, tennis great Serena Williams did an interview with Vogue in which she discussed the potentially life-threatening complications she endured after childbirth; how she knew she had a pulmonary embolism based on her past history; and the way both a nurse and a doctor initially doubted her and therefore delayed giving her the proper diagnostic test and treatment. For real, someone dared to dismiss SERENA WILLIAMS. That’s why I strongly urge you to read the ProPublica series. (If you have to pick just one story to read, go with that of Lauren Bloomstein, a neonatal nurse who died in the hospital where she worked. WTF.) If you have had personal experience with cases of maternal death or severe complications, you should report that to ProPublica. And please consider giving a little something to ProPublica so that it can keep up the good work. ProPublica’s mission includes having real-life impact and several cities have already established committees to review deaths and severe complications related to pregnancy and childbirth.

Back to the hat that started this whole thing: You can get the navy FACTS snapback at FACTISTS.com, where the product description describes exactly where the hat was made and by whom. I dig the transparency (but, Oliver, can you all make the hat in black too?). There’s also a burgundy SCIENCE hat. Twenty percent of the profit from that one goes to the American Association for the Advancement of Science. FACTS and SCIENCE are frequently under attack these days, so why not show your support?

You might also like
Almost as Good as SkyMall
How to Fight for Reproductive Rights
Media Alert: Ramona Russell of Uptown Liz
Previous Post: « Celebrity Engagement Rings: A Review
Next Post: More About the Garnet Man Brooch »