Every day, I get three or four emails in which someone claims to be a “big fan” of my blog and offers me $50 to publish a guest post (which often includes the dreaded “infographic”). Of course, anyone who truly is a big fan of this blog might have noticed that I haven’t had a sponsored post in my entire 10 years of blogging. But hope springs eternal, and spammers gotta spam in case I finally break down.

Now the writers of spammy emails are going to have new ammunition against me, because Part II of December 2017’s Jewel of the Month post has been guest-written by the recently engaged Abigail and I didn’t even ask her for the $50! Dang! This guest post came about because I like to interview my engagement-ring customers about everything from how they met, how they designed their rings, and how the proposal went. Then I write them up. Here are a few of the previous ones.

When I asked Abigail if she would answer a few questions about how she and fiancé Max wound up skipping down the path to marital bliss, she came back with an entire blog post COMPLETE WITH A MEME AND SCREENSHOTS that had me literally laughing out loud … and then ugly crying because I got so emotional. Without further ado, here’s Abigail and a story about a sapphire-halo engagement ring.

THE ABIGAIL AND MAX CHRONICLES
BY ABIGAIL, IN HER OWN WORDS AND IMAGES
(with very light editing by Wendy)

I’ll start out by saying my fiancé, Max, knew he wanted to marry me before I was sure what to think of him. And as awkward as that sounds now, it was actually potentially more embarrassing at the time — if, that is, Wendy hadn’t entered our lives.

My charming, optimistic guy decided just five short months into dating that I was the one for him, and he bought a diamond last January with his year-end bonus money. While we had talked about kids and marriage early on — because we met in our mid-30s and that’s what we both wanted — we hadn’t really planned that far ahead with each other. He wanted to surprise me, but he also wanted to make sure it was something I liked, so he recruited Wendy to help.

I really don’t know what he was thinking — though seeing how things worked out and how much we really love each other and fit together now, maybe he was ahead of the game — but at the time, I wasn’t picking up the signals. Instead, I started to fear the commitment of even moving in together. So when, after I got to know Wendy and her amazing husband over dinner early in the year, Wendy reached out and asked me to lunch, I never suspected she was a secret agent for my then-boyfriend trying to find out what type of engagement ring I wanted. [WENDY’S NOTE: I’m still convinced I asked Abigail to lunch just because I liked her and that the timing of the engagement-ring mission was a coincidence!]

I remember us having a great time talking, but when she casually dropped the question, “So come on, tell me, what type of ring are you looking for when you and Max get engaged,” I couldn’t even fathom an answer.

She unbeknownst to me reported this dilemma back to the now-starting-to-doubt, would-be groom. He dropped some hints later on, but I think the only thing I expressed to him over this time was that I really didn’t want someone to surprise me with a ring without consulting me (poor guy).

At this point, I was definitely giving him mixed signals. Sure, I was the one who had told him just two months into dating that we should move in together. It’s just that when he agreed in January (and secretly bought the diamond) … I became afraid. This meme pretty much described how I was feeling: 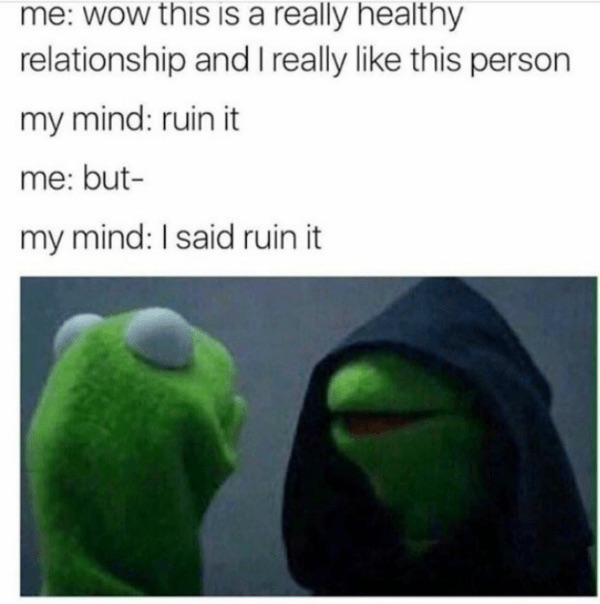 In May, the issue of moving in together came up again, and I postponed it a second time. Max reached his breaking point. Now it was his turn to take me to lunch. We had what I recall as our “are you in or out” conversation. He straight up told me he’d gotten the rock — but it was clear this wasn’t a proposal. This was him saying, “This is how serious I am about you and I don’t think you’re that serious about me.” I was overwhelmed! I had to think alone for a while. I then spoke with my friend Miriam, who was one of the first people to meet him and who knows me really well. She basically said, “What the hell are you waiting for!?”

That very weekend we found the apartment we’re now living in together. He put me in touch with Wendy shortly thereafter and told me that she had been holding this beautiful diamond all year. Haha! I had no clue! She was so crafty. Wendy and I soon starting working together to create my vision for the perfect engagement ring. I had fallen in love with the idea of an engagement ring with colored gems in a halo around the diamond. Once colored gems were on my mind, I thought of the gorgeous blue of the sapphire in Princess Kate’s ring.

So that’s what we were shooting for, along with some elements of Wendy’s awesome style.

You know the wise words of George W. Bush, “Fool me once, shame on — shame on you. Fool me — you can’t get fooled again”? Apparently, for me, that’s not true because after we agreed on the ring design early in the fall, Wendy told me it wouldn’t be ready until December. Now, instead of dragging my feet, I wanted everything done yesterday, which enabled Wendy and Max to have some fun at my expense while they worked to get the ring finished for November. They emailed each other: 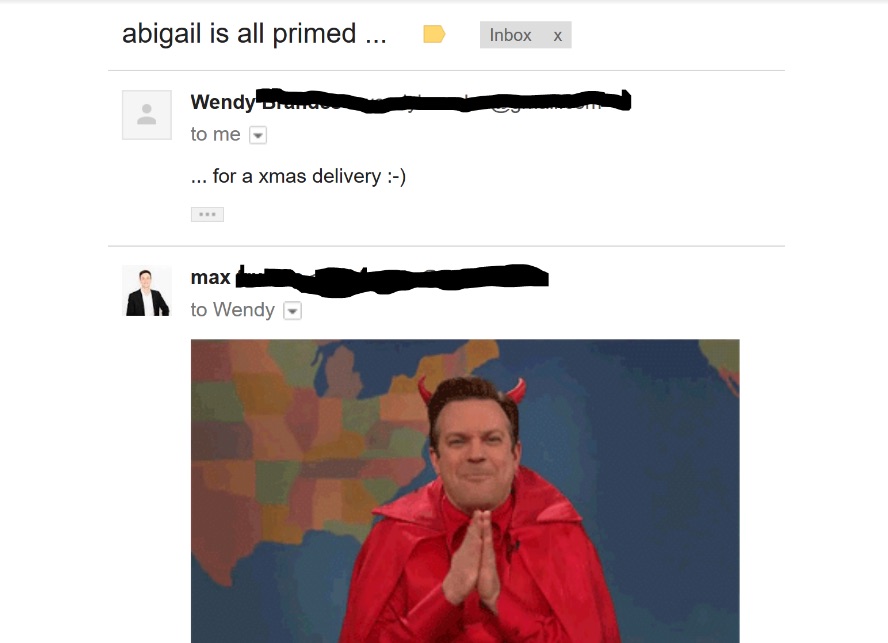 That same day, this is Max texting with me. 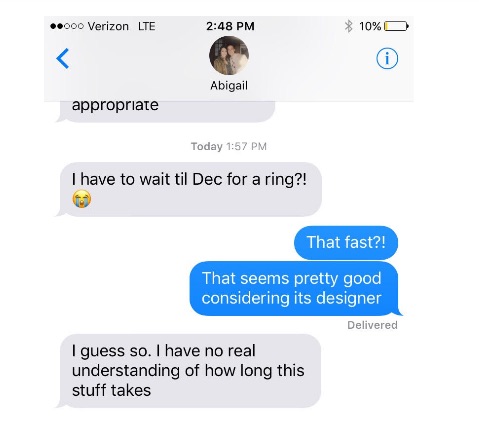 The second-to-last Thursday in November — shortly before we were about to go on a romantic trip to Paris — I came home after a rough day to the lights turned low, music playing, flowers out, and a bunch of pictures of us laid out on the counter. I didn’t get the hint again! I thought Max was just being nice. He took out a couple of champagne flutes from the cabinet and said I should grab some bubbly from the fridge — where lo and behold the most beautiful ring I ever could have imagined was waiting, tied around the champagne!! I turned around and he was on one knee! I was so surprised and overwhelmed with joy, I said “Yes!” and burst into tears. 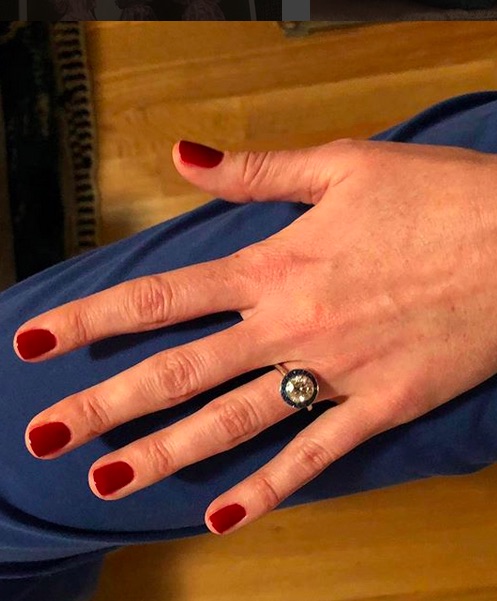 She was still wearing her scrubs! Glad they matched the ring.

The ring … I can’t say how amazing it turned out. It’s just gorgeous craft and designed to perfection. I’m so happy and grateful to Wendy for her guidance with my wonderful, prescient, (and sneaky) man.

This is Wendy again. Thanks to Abigail and Max choosing me to make this important piece of jewelry for them, for sharing their story with us all, and providing yet more proof that you can ask a woman to help design her own engagement ring and still surprise her with it! I’m also delighted that Abigail used Kermit to explain her sudden-onset fear of commitment, an issue that I danced around in the engagement-ring video I posted yesterday AND in my back-in-the-day conversation with poor Max. I was like, “Um, dude, she’s just very distracted by work right now”! 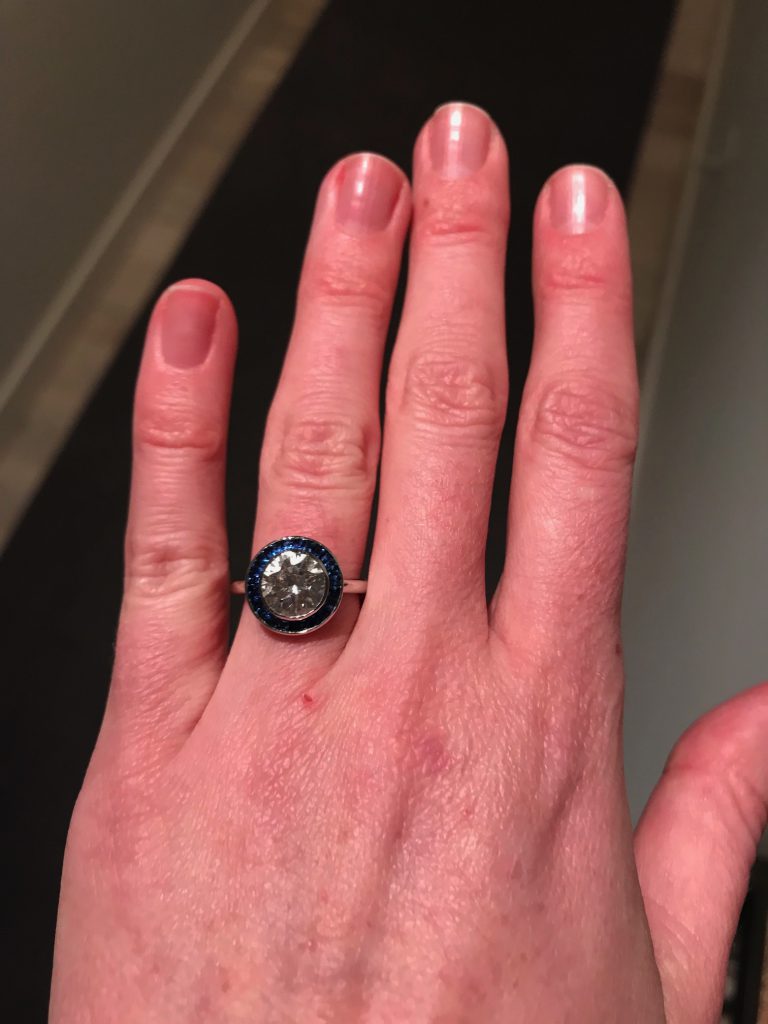 If you missed yesterday’s video about Abigail, Max, and engagement-ring design in general, check it out now. Any questions about a custom engagement ring of your own? Send ’em to me at info at wendybrandes dot com.

You might also like
Heart-Shaped Gems Can Be Lovable
Throwback Thursday for Chinese New Year
Wednesday's Videos: I'm a WJA Winner!
Previous Post: « Wednesday’s Video: Jewel of the Month, Part I
Next Post: The Week in Review »