I’m glad I managed to publish Thursday’s blog post a couple of hours before Taylor Swift’s new single was released.  I stand by my praise of Swift’s matter-of-fact testimony against a sexual harasser who had the nerve to sue her for complaining about his bad behavior.  It’s too bad that she didn’t set those statements to a “sick beat” and turn it into a song, because that would have been a work of art compared to her actual product, “Look What You Made Me Do.”

I had allowed myself a moment of hopefulness on Wednesday, when Swift announced that her next album would be called Reputation. She teased it with snake imagery, appearing to embrace the devious descriptor bestowed upon her by Kim Kardashisan last summer after Swift maneuvered to make Kardashian’s husband, Kanye West, look like he launched a surprise lyrical attack on Taylor. What if the badass Taylor Swift — the one who is nobody’s victim, who pulls the strings, who doesn’t let anyone mess with her body or her money — came out to play? I imagined an album that said, “Screw these stories people tell about me, especially the stories I tell about me. Kanye West, Nicki Minaj, Joe Jonas, John Mayer, and Katy Perry? I make bank off those people. I’m beautiful, blonde, tall, rich, thin, and powerful, and I love it. ” Could there be a little bit of Joan Jett hiding in Taylor Swift?

Nah. Let’s face it. Taylor Swift is a big brand, churning out dollars for a music industry that would rather let a golden goose eat itself to death for immediate financial gains than put it on a healthier artistic diet. Therefore, we’ve now got cutesy snake rings and a Kanye-referencing song that — perhaps inadvertently — presents Swift as a creepy kind of faux victim right from the title. “Look what you made me do” is, of course, what abusers say to their victims in order to justify their abuse while simultaneously claiming victimhood. That makes the song a good representation of Taylor’s entire career. Ellie Woodward published a thorough analysis of Swift’s strategy on BuzzFeed this January; it’s worth the read.

Swift is scheduled to debut the full video for “Look What You Made Me Do” at tonight’s MTV Video Music Awards, a show that will be hosted by Swift’s other arch-rival, Katy Perry. That should be interesting, considering that previews of the video make it look so much like Beyoncé’s “Formation” that they inspired much hilarity on Twitter and a defensive response from the video’s director. 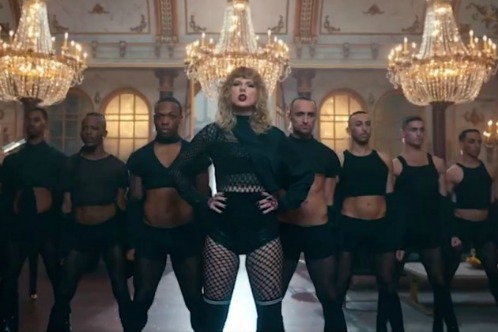 It wouldn’t be the first time Swift has recycled black women’s artistic expressions only to sulk when called out for it.

Speaking of the VMAS, as well as blonde, white women who use black culture whenever it suits them, I’ve been meaning to write about Miley Cyrus since her May interview with Billboard. I first started enjoying me some Miley in 2012, after the child actress from Disney’s Hannah Montana show chopped off her standard-issue starlet hair and went punk. Then she rocked the VMAs in August 2013 — the same day she released her single “Wrecking Ball” — creating a 1984-Madonna-level scandal by twerking on one-hit wonder duet partner Robin Thicke. A few weeks later she followed up with an eye-popping video for “Wrecking Ball,” in which she was tearful and naked, riding astride a wrecking ball, and taking an occasional time-out to lick a sledgehammer. I loved all of it!

As Miley continued blazing down her weed-scented, twerking, topless, tongue-wagging new career path, there were people who charged her with using black dances and dancers, black styles, and black language as part of a shameless money grab. I, at first, was convinced that she had simply thrown off the fake Hollywood stuff to follow her heart. This was the real Miley! But the act began to fray in 2015, when Miley was booked to return to the VMAs as the event’s host. The problem began with none other than Taylor Swift, a month before the awards. Nicki Minaj — displeased with a lack of nominations for her massive hit video for “Anaconda” — took to Twitter to say that she and black women in general were discriminated against. “Black women influence pop culture so much but are rarely rewarded for it,” Nicki wrote, noting the VMAs favored a certain type:

If your video celebrates women with very slim bodies, you will be nominated for vid of the year ?????????????

It was a general statement, but when you know you’re guilty, everything seems to be about you, right? Swift’s Twitter fingers got the best of her, and she used her piss-poor interpretation of feminism (“never criticize me”) to try to shut Nicki up.

Miley stayed out of it until days before the VMAs, when she was asked about situation during an interview with the New York Times. She was initially detached: “[Nicki] was saying that everyone was white and blonde that got nominated, I heard? And then Taylor Swift butted in.” Then writer Joe Coscarelli said, “[Nicki] may have alluded to ‘Wrecking Ball’ also, saying that when a naked white girl breaks a Vevo record she gets nominated.” Well, that made it personal, and Miley segued into several paragraphs of whitesplaining, including taking issue with “tone”:

Still completely obtuse after the negative reaction to that interview, Miley showed up at her VMA hosting gig wearing dreadlocks, having called rapper Snoop Dogg her “real mammy” in a pre-recorded bit. Nicki Minaj, who had already gone through the motions of forgiveness by opening the show with Taylor Swift, was understandably disinclined to continue holding her tongue after “Anaconda” won for best hip-hop video. After accepting her award, Minaj said, “And now, back to this bitch that had a lot to say about me the other day in the press. Miley, what’s good?”

The resulting look of shock on Miley’s face was the most spectacular thing she’s ever worn.

Miley started stepping back from the spotlight after that, but this May — after she went three weeks without smoking weed! — she was ready to talk to Billboard about her comeback single, “Malibu,” and her renewed relationship with fiance Liam Hemsworth, the actor with whom she had a breakup in 2013. Saying that nipple pasties are now in her past but still defending her use of black dancers on stage, the raunchy performer who dragged the iconic Snoop Dogg into an awkward television sketch explained that she is over both raunch and rap.

“… I also love that new Kendrick [Lamar] song [‘Humble’]: “Show me somethin’ natural like ass with some stretch marks.” I love that because it’s not “Come sit on my dick, suck on my cock.” I can’t listen to that anymore. That’s what pushed me out of the hip-hop scene a little. It was too much ‘Lamborghini, got my Rolex, got a girl on my cock’ — I am so not that.”

In other words, the 2013 critics were right and I was oh-so-wrong. Miley got what she wanted, then discarded black culture: She successfully crossed over from child star to adult entertainer with a hot look and a hit single (the video for which she now dislikes as much as her pasties). Now she can be white again. When called out for this, she simply justified herself some more. The New Yorker called this “a creepy return to wholesomeness.” E!News, quoting a Rolling Stone 2015 phrase for Miley, ran with the headline, “Inside Miley Cyrus’ Journey From ‘Lunatic Pop Princess’ to Just Being Miley Again.” The story makes it crystal clear that today’s Miley is “good Miley,” which means that the lunatic Miley, the Miley associated with black people and black culture was … what’s the word I’m looking for? Oh. Bad.

As for tonight’s VMAs, it’s up against the season finale of Game of Thrones, so I won’t be watching the VMAs as I usually would be because I need to count how many plot holes there are in this week’s GoT episode. It will be hard to top last week’s. This whole seventh season has been a shambles. Journeys over land or sea that used to take multiple episodes now take minutes, and it seems like everyone has excellent GPS, especially half-dead Uncle Benjen, who miraculously turned up to save the day once again, yet couldn’t take 10 seconds to get back on the horse and save himself. Did you know you don’t need to put on your hood during a long standoff surrounded by ice, even as one of your companions freezes to death? Now you know.

But the worst thing about watching Game of Thrones these days is the constant reminder that HBO gave the green light to white-dude (not White Walker) showrunners David Benioff and Dan Weiss for a series called Confederate. Confederate — a big reward for having a big hit, approved without a script or casting or anything at all finished — is supposed to be set in an alternative timeline in which slavery never ended. Here we are neck-deep in real-life KKK and Nazis, and two dude-bros need to rub it in, then get defensive when a whole lot of people say they don’t want this show. Keep in mind that these are the two sensitive men who added a couple of extra rapes to the already sexually violent Game of Thrones story and came up with this freeing-the-slaves scene to end Season 3. 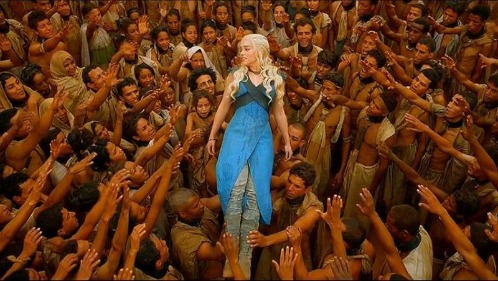 I nearly died of second-hand embarrassment after seeing the darker-skinned slaves holding Daenerys Targaryen, their white blonde savior, above their heads. So if you’re on Twitter while watching Game of Thrones tonight, tweet #NoConfederate at HBO to let the suits there know they’ve aired enough stupid things from the GoT team. If HBO wants a fictional way to deal with slavery, maybe it can pick up the recently cancelled Underground from WGN America. And white people! Let’s all try to do better, shall we?

You might also like
Shopping My Closet for the Hot Emmys Color Combo
David Bowie's 1976 Playboy Interview and Other Links
What Wendy Wore: Zang Toi at Vanity Fair Oscar Party
Previous Post: « Caught on Camera: Halle, Taylor, and Me
Next Post: Recent Posts: Gropers and Manipulators »