Happy 56th birthday to Graham McPherson — also known as Suggs, the lead singer of British ska/pop group Madness, famous in the 1980s for its bouncy songs and “Nutty Boys” persona. Madness’s hit debut album, One Step Beyond …,  came out in 1979 when Suggs was still a teenager. 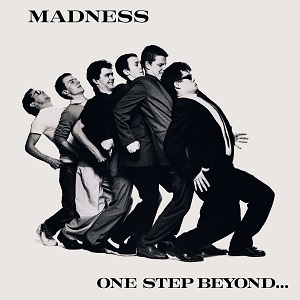 MTV launched two years later in the U.S. until 1981, and the couple-years-old video for the title track of the Madness album got so much airplay that it’s been stuck in my mind ever since. Especially the intro!

(If the Madness sound reminds you of No Doubt, there’s a reason for that.)

“Baggy Trousers” — a song co-written by Suggs about his school days — came out in between, in 1980. The video has an impressive bit with saxophone player Lee Thompson flying through the air, but I don’t recall this one from back in the day. Maybe it never really crossed over to the U.S.?

The group first broke up in 1986. Since then, they’ve gotten back together, gone on hiatus again, returned again… and the seven guys are still hanging in there. In fact, Madness is now such a classic that they performed on the roof of Buckingham Palace in 2012 to celebrate the Diamond Jubilee of Queen Elizabeth II. Their first big reunion for a live show was for “Madstock,” held in London’s Finsbury Park in 1992. Tens of thousands of fans Madness fans jumping up and down in unison at the Madstock performance on top of an underground lake in Finsbury Park caused nearby residents to report an earthquake. According to a number of reports, the concert registered a 4.5 on the Richter scale.

Suggs gives GREAT interviews. Here are a few of my favorites:

Having done plenty of shrieking for Duran Duran in the 1980s, I can imagine how that last experience went. Anyway, congrats to Suggs on 56 high-achieving years — and please lock down all your pets!