I saw this tweet from Harper’s Bazaar over the weekend. All my favorite models were pictured in it, so I clicked through.

The photo gallery was titled “Supermodels Relive Filming The George Michael Freedom! ’90 Video,” and subtitled “Here’s what they have to say 25 years later.” I thought, “HOLY SHIT! I can’t BELIEVE it’s been 25 years since that video.” Then I thought, “Wait, the song was ‘Freedom! ’90’ and it’s 2016. That’s 26 years.” I looked again and saw that the story had originally been posted on Oct. 30, 2015. I’m kinda mad! Harper’s Bazaar, Y U No make it clear you’re retweeting random old stuff? Also now I feel even older than I did when I thought a mere 25 years had passed! Thanks a lot! 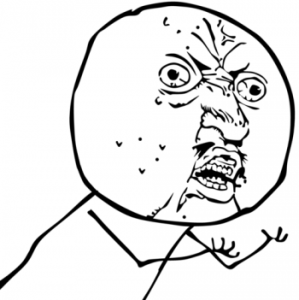 Still, I wanted to share this video because it truly is one of the best videos of all time. Just nonstop, runway-worthy beauty, ESPECIALLY from my No. 1 fave, Linda Evangelista.

George Michael didn’t publicly reveal that he was gay until 1998, after he was arrested for “lewd conduct” in a restroom, but “Freedom! ’90” pretty much outed him. A straight dude would have had all the models draped all over him in the video, but George didn’t appear in the video at all! It was high-fashion, not Hooters.

George’s 1992 “Too Funky” video was even more high-fashion. Linda was back from “Freedom! ’90.” This time she was strutting down a runway with a new crop of models, all wearing Thierry Mugler’s outrageous designs. (Mugler directed too.) Sharing screen time with the models were actress Rossy de Palma, with her one-of-a-kind profile, and drag artists Joey Arias and Lypsinka. (You know who else worked with Joey Arias? David Bowie.) George donated “Too Funky” and two other songs to the album Red Hot + Dance, which raised money for AIDS awareness.

I’ve always felt bad that George was forced to hide a big part of his life, but in 2014, he told People magazine that he had no regrets about not being open sooner. He said:

“In the years when HIV was a killer, any parent of an openly gay person was terrified. I knew my mother well enough that she would spend everyday praying that I didn’t come across that virus. She’d have worried like that.”

The AIDS stigma was very real. In 1987, Princess Diana shocked people just by shaking hands with AIDS doctors and patients. But long after AIDS became a survivable, chronic disease, it still wasn’t and isn’t easy for many people in the entertainment industry to come out. Ricky Martin was constantly asked about his personal life after “Livin’ la Vida Loca” hit big in 1999; it took him till 2010 to feel comfortable telling the truth. By the way, I still love that song and video! It’s so sex-ay … I can dream, can’t I?!

Even though society has become much more open (thankfully), there are still people in show business who feel they have to hide to protect their careers. Actress Ellen Page, who came out in 2014, said earlier this year:

“There’s still that double standard. I look at all the things I’ve done in movies: I’ve drugged a guy, tortured someone, become a roller-derby star overnight. But now I’m gay, I can’t play a straight person?”

SMH! It’s a damn shame that anyone has to feel that kind of pressure 25 years — NO! 26 YEARS! — after George Michael followed up the “Freedom! ’90” lyric, “I was every little hungry schoolgirl’s pride and joy” with:

Back to the video and the fashion: Last year, for the anniversary, Allure ran an in-depth story on the making of the “Freedom! ’90” video and what made it so special. Even I didn’t know Linda dyed her hair platinum the night before the shoot! Check it out here.

And you must see how the “Freedom! ’90” models and song made a splash on Versace’s Fall 1991 runway.

I get chills! Definitely one of the greatest runway moments OF ALL TIME.